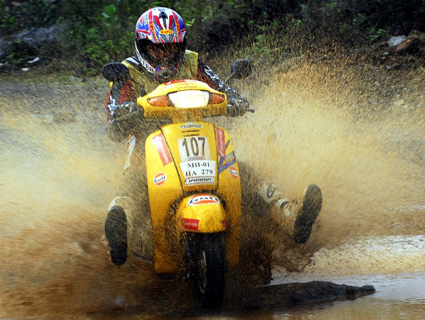 The rains have arrived to make the weatther cool after a sweaty and long summer, and so has the Gulf Monsoon Rally to splash some cool water on the world of motorsports. The event was scheduled to take place on the 13th of June, 201. However, before posting this news, there has been a series of twists that have taken place before the rally could commence. The rally sponsored by Gulf Oil Corporation and organized by Sportscraft was denied permission by the Com. of Police – Navi Mumbai, to take place at its prior location owing to traffic with children and women moving on its 7 km route.
The rally had already registered thirty eight riders including seven from Pune and others from Nashik, Kolhapur, Vidarbha, Bhopal and Hyderabad. However, according to the organizers, the rally has been held at the backwoods of Navi Mumbai since the past ten years and there never seemed to be anything wrong in its location which was purely mining and quarrying land with almost no traffic leaving behind a couple of dumping trucks.
Sportscraft Chief Mr. Shrikant Karani almost lost all hope after being denied permission for the first time in 28 years of organizing motorsports events. “There is more than meets the eye. There is no danger to life or limb of people living around the area and I can’t understand why permission has been denied at the last minute. Why, ask anyone who has participated, or even those who have covered past scooter rallies in Navi Mumbai, if they have seen people, whether or walking or driving in the area where the event is conducted,” said a very disappointed Mr. Karani. The disappointment was also shared by the riders who had arrived today for the pre-rally briefing.
However, Mr. Jamshed Godrej arrived right on time to save the day!  He offered Sportscraft to organize the event at the Godrej Company Ground in Vikhroli which is the new location for the event. The rally will commence at 10 AM tomorrow!
Image: FMSCI
Few Images of the Gulf Monsoon Rally from the previous year from the Motoroids archive.