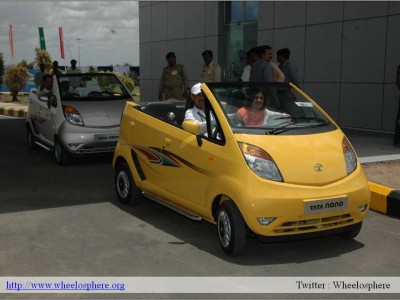 There are cars which you can buy and then there are ones which u can’t, even if you had all the resources to buy one.

And I am sure we can make a movie called ‘Hazaaron Cars’ Aisi full of cars that exist but we won’t be able to lay our hands on them. And you might be thinking that I will mention some names of technological marvels like the Mclaren F1 and Ferrari FXX. But sorry to disappoint you all, the car in question here is closer to us. For some closer to heart, for the rest close in geographic terms, as it was born on the same land mass as we all were, here in India. The car is- India’s pride, the Tata Nano.

Why I am talking about the car here is because our friends at Wheelosphere spotted the car in topless version. A Nano Topless may sound unusual so here is a pic of the car.

You might have heard that Tata uses Indicas (even they are devoid of roofs) to ferry visitors and engineers around the Pune plant. So when it comes to the case of Sanand plant in Gujrat, you know very well who will do the job instead of the Indicas. Yeah it is the one lakh car, which is produced there and now works there too. The car looks beautiful in the topless version too. After all we all like topless beauties. Dont we?

Tata has no plans of selling this car, and the car shown in the pic is just for use in the plant. But who knows if we persuade them, they might just think of making one.

Please leave your comments and let us know whether you would like to see yourself prowling in the town with the top down er in this case topless.