Home News Gujarat Couple Perish Even After Climbing Out Of A Sinking Mercedes; Was There A Way Out?

In a tragic accident which involved a Mercedes sedan, a couple from Gujarat lost their lives when the car slowly drowned in a lake. Details about what happened are still scarce, however, it is being assumed that the driver was speeding and lost control when the car hit a speed bump and landed in the lake. Another theory suggests that the steering system had somehow jammed, which resulted in the driver losing all control over the car.

The accident happened near Ambapur village on the Ahmedabad-Gandhinagar highway. A video shot by bystanders, who we assume could not swim, has captured heartbreaking visuals of Anand and Fanny Modi coming out of the sunroof of the car with its nose submerged in water. They got out of the sunroof, sat on the vehicle and asked for help. The lady then slipped after panicking, and a few seconds later, both of them drowned in the lake. Bystanders kept yelling, asking the couple to reach for the rear section. However, it was too late.

Also read: Watch This Tata Harrier Wade Through Water But Be Careful, Don’t Fall For It! 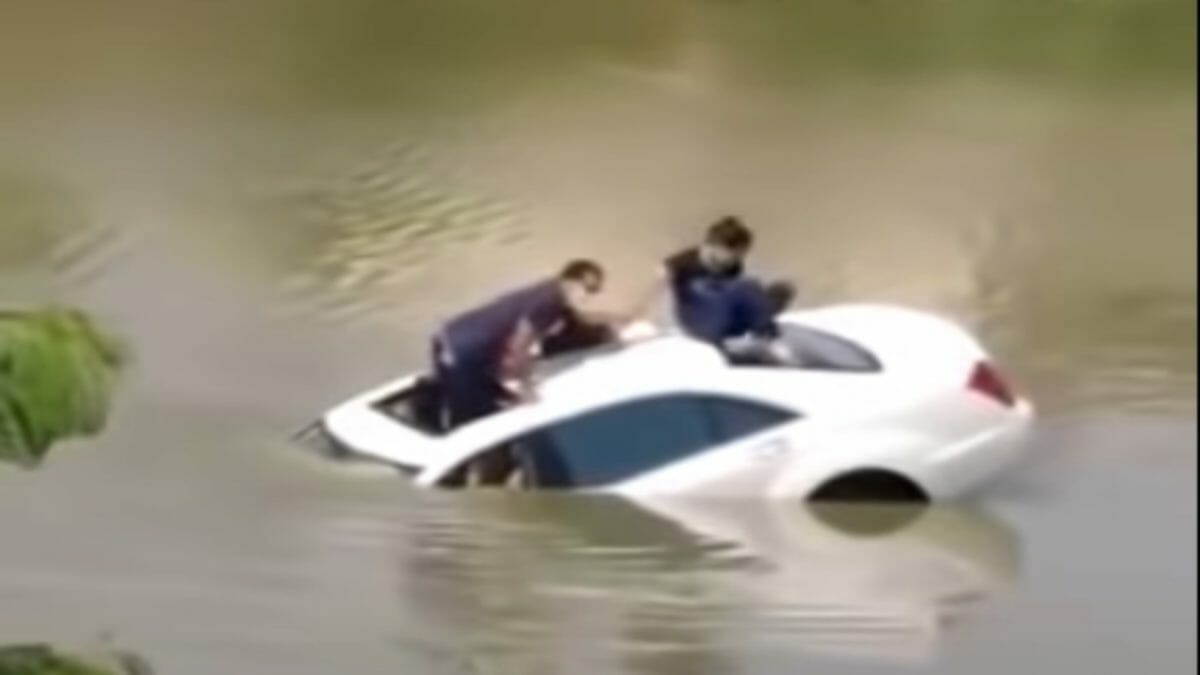 The car reportedly crashed into a lake on the Adalaj-Koba highway after jumping a bump in Tasalwa in Ambapur village. That brings us to the hazards that a driver faces while driving on the Indian roads. Unmarked speed-breakers top the list while and in most cases,. However, we’re still dumbfounded as to how did the car manage to travel so deep into the water body?

How could it have been avoided?

One should keep in mind that the Indian roads are full of surprises, and in most cases, the bad kind of surprises. One should be completely aware of the surroundings and drive at appropriate speeds. The Modis were reportedly second owners of the car as it was put on sale on an online portal not so long ago. It is possible that the driver wasn’t familiar with the driving dynamics and performance capabilities of the Mercedes, yet, decided to mash the pedal. A mechanical failure could also be the reason, but we can only assume.

We hope not but if you ever find yourself in a similar situation, there are a couple of things which can put you on the other side of the line. If your car doesn’t have a sunroof and you can’t bring the windows down, you can use the headrest to break the window and escape (another reason why an adjustable headrest is a lifesaver). You can also wedge it between the frame and window to flex the glass. Leveraging is easier than striking because when you’re submerged in water, you won’t have the velocity needed to break it easily.

If we can keep a large baseball bat in our car to beat the life out of the other person, we sure can manage to accommodate an emergency kit, right? It totally depends individually on how many things you want to include in your emergency kit. Also, it’s never too late to learn how to swim. Besides being great for fitness, it could also save yours and someone else’s life.

One more thing which could go a long way in such situations is keeping calm while acting quickly. In research done on the subject, it was found that in the vast majority of situations, a vehicle will actually float for 30-120 seconds before sinking. When the difference between life and death comes down to a matter of seconds, a clear head is essential to your survival.