Home Features Watch This Tata Harrier Wade Through Water But Be Careful, Don’t Fall For It!

Unlike conventional SUVs, the Harrier is only front-wheel driven but it is surely quite capable when it comes to off-roading, thanks to the numerous drive modes and a smart traction control system. Tata Motors claims that the Harrier can wade through a respectable 450mm of water. 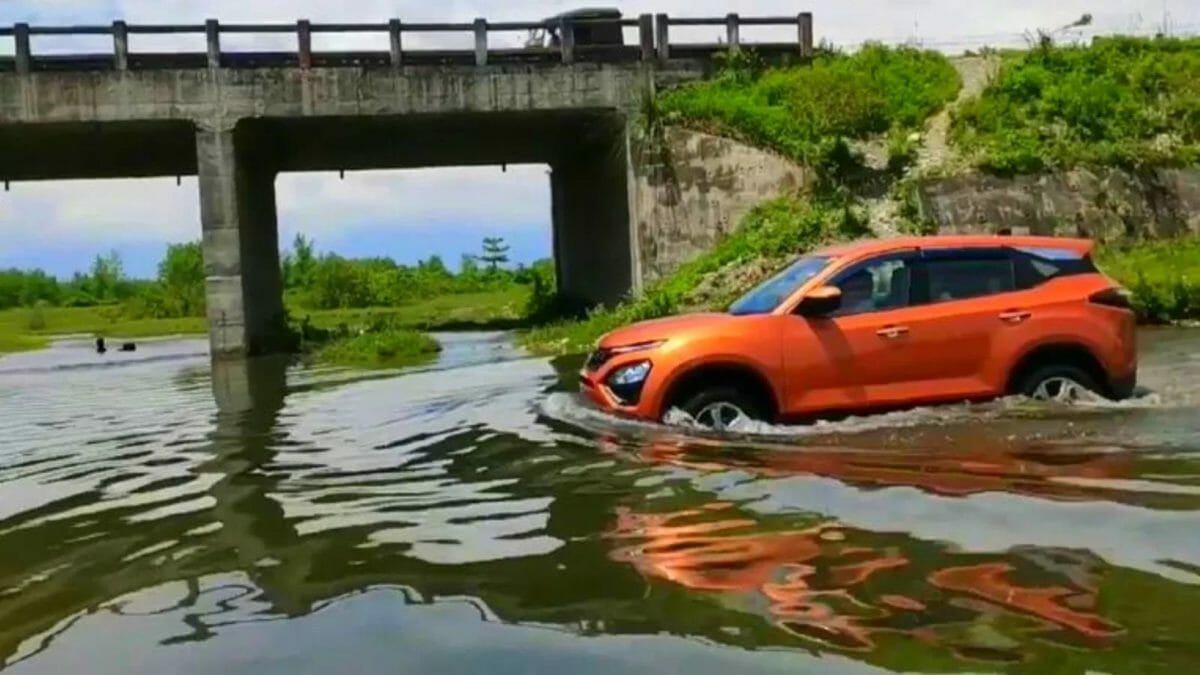 A video has surfaced on the internet where the owner of a Harrier is taking advantage of the above fact. The Tata Harrier in the video can be seen crossing the river without any problem. While the video talks about the ground clearance of the SUV, it is more about the water wading capabilities. The video uploaded by Viratian A on YouTube shows how the SUV is able to wade the waters without much difficulty.

However, don’t let the video above encourage you to take your SUV for a water wading test as there are quite a few flaws in it. The creator breaches many norms when it comes to technicalities of water wading.

What’s Wrong In This Video?

Firstly, the driver dips the car into the water at a high speed which might be damaging to the car. The reason being that wading through water at a high speed like this video shows can cause the water to reach the air intake of the car. If a large amount of water reaches the piston and it cannot be compressed by the engine, it will stop working at that very moment. It is called a hydrostatic lock and results in damage which is seriously expensive to fix.

Even a drop of water reaching the internal circuit of the car can prove to be deadly for the vehicle. Water reaching the internal circuit can even cause the ECU to blow, which is a major expense. Many modern vehicles have sensors to protect the engine against water and once the sensor detects water in the air intake, it will prevent the engine from entering a hydrostatic lock and will not allow it to work until the system is checked by an authorised dealership and the lock is removed. It again can cost a lot of money since the whole air intake system will be checked and cleaned.

The Correct Way Of Doing It

The correct method would be the car entering the water at a slow walking pace and then it must create a bow wave. Prior to that, one must try to walk through and gauge the depth and the current. If driving through water can be avoided by taking a different route, do that, even if it means covering a longer distance. Once the vehicle has entered the pool, how to judge whether you are moving too quick or too slow? If the water goes over the engine bonnet or splashes into the windshield – you are driving too fast. If the wave in front of the car doesn’t form, you are driving too slowly. The driver is then supposed to move the car forward at a steady pace.

Tata Motors, however, had officially released the video of water before the launch of the vehicle. The videos show the Harrier go through deep water but the question should it be done quite often? If someone wants to do it regularly, he/she should get a snorkel installed.

The snorkel increases the height of the air intake and helps the vehicle to go through such water crossings. It is true not for Harrier but all the cars that regularly have to go through water. Most of the off-road enthusiasts install snorkels in their car to save their vehicles from getting hydrostatically locked. Even though most of these cars have lift kits installed that significantly increase the height of air intake and water wading depth capability, a snorkel is important to go through such water wading depths.