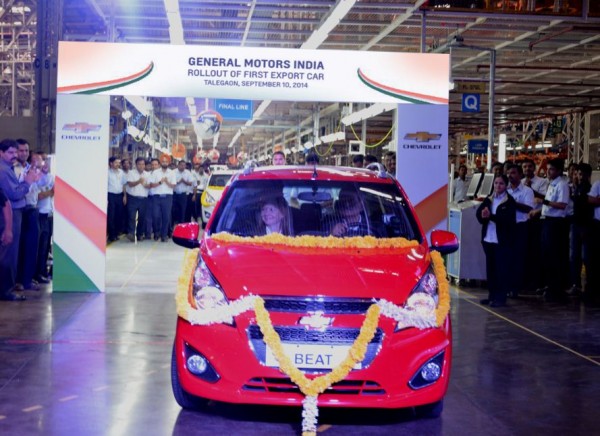 General Motors is represented by their brand Chevrolet in India. Until now they have invested about $1 Billion in their facilities in Talegaon and Halol which can produce more than 280,000 cars annually. The trouble is, they haven’t been able to set the sales chart on fire and as a result their manufacturing facilities are under utilized. However, that is about to change now as General Motors CEO, Mary Barra, who was on a recent visit to India, participated in the roll out event of the first car to be exported from their Indian manufacturing facility. The car, a left hand drive Chevrolet Beat will be initially exported to Chile.

Speaking at the event, Barra said, “India represents a great opportunity for Chevrolet, with a relatively small vehicle population and a rapidly growing young middle class, India is expected to become one of the world’s three largest markets by 2020. GM is working to better understand the Indian Market so we can give Indian customers what they deserve – safe, high quality Chevrolet vehicles with exceptional designs that exceed expectations.”

The GM leadership team also also visited Chevrolet dealerships to further understand market momentum, customer preference and network performance. Barra also met the Prime Minister of India, Mr Narendra Modi, congratulating him on his victory and thanking him for supporting the growth of GM in India.