The new Ford Freestyle is here, and as the American carmaker proclaimed, it’s really not just the Figo on stilts. The new hatchback crossover, that Ford likes calling a CUV or Compact Utility Vehicle, gets significant visual upgrades over the Figo hatch, lots of new features inside the cabin and an advanced suite of active and passive safety aids. It’s turned out a capable machine for what it set out to accomplish. Here’s our review of the new cross-hatch.

The changes made to the Figo hatch are all too evident, and are meant to underline the relatively better soft-roading capabilities of the Freestyle. The grille has been tweaked to radiate a bolder, more rugged look. The chrome slats on the Figo have been replaced by a black, 3-dimensional honeycomb mesh grille. The headlamps now have black elements within the reflector unit and on the swept up edges. The bumper obviously gets an overhaul and is now more muscular. The creases on it are more pronounced and it gets a black plastic under-cladding along with a satin silver faux skid plate to add to the bolder, more muscular face. The fog lamps are now housed in a black plastic surround which extends to the upper portion of the bumper and visually forming a shape that resembles the number 6.

There’s no projector lamps or LED DRL’s here, and from an aesthetic perspective, those omissions may somewhat reduce the appeal of the car to its potential buyers. On the flip side, though, this also probably reflects the fact that Ford wants to price this car aggressively, which is paramount for the success of this machine. 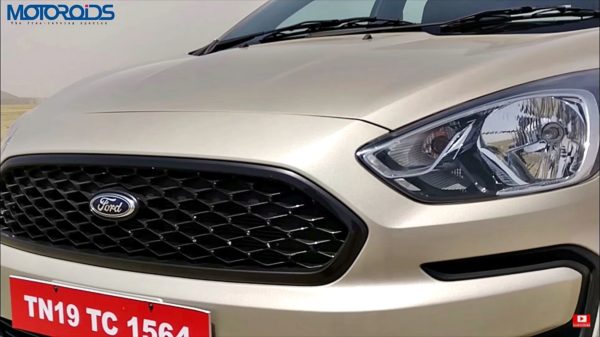 On the sides, the ground clearance has been raised by 20mm to 190mm, just 10mm shy of the high Ecosport. The 15 inch wheels on the Titanium + variant look great and are wrapped in 185/60 rubber. The lower portion of the doors gets new decals, again to somewhat underline the more free-spirited character of the car. The plastic under-cladding seen on the front bumper runs all around the car to accentuate the go-anywhere spirit of the Freestyle. Up to, you also get a pair of silver finished roof rails, which further add to the crossover-ish looks and are functional too, with a load-bearing capability of up to 50 kg. 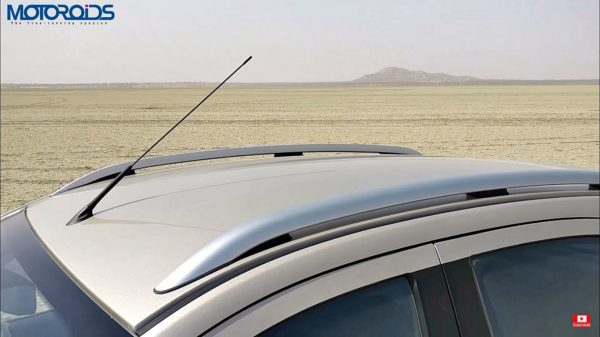 At the rear, the bumper carries over the muscular theme from the front, replete with black under-cladding and faux skid plate. The black plastic accents are also present here. The Freestyle lettering on the hatch completes the re-styling job, along with some tweaks made to the tail-lamp to add some more uniqueness to the Freestyle’s visual character. 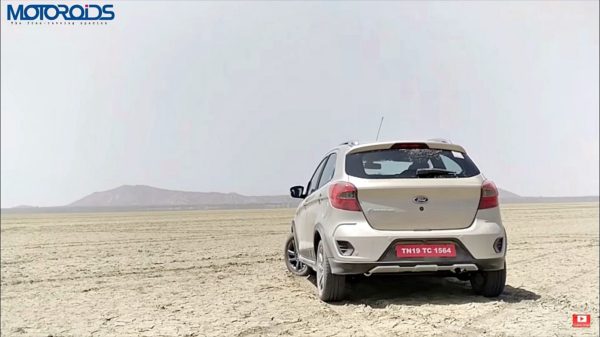 Overall, the Freestyle is a smartly done job, visually. It radiates a carefree, free-spirited vibe, without trying too hard to come across as a butch machine. It looks nice, well proportioned and smart, unlike a few other similarly themed cars, which went OTT with the whole crossover theme. 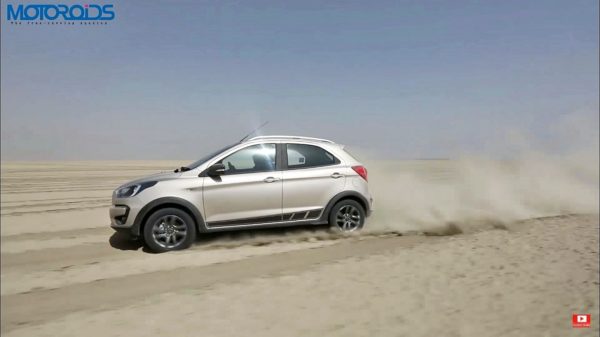 We drove the new 1.2 litre three cylinder dragon series petrol engine that replaces the Figo’s 1.2 Ti-VCT petrol motor. The five speed transmission on the Freestyle is also all-new, and in that sense, the Freestyle is a lot more of a new car than you would have originally imagined. 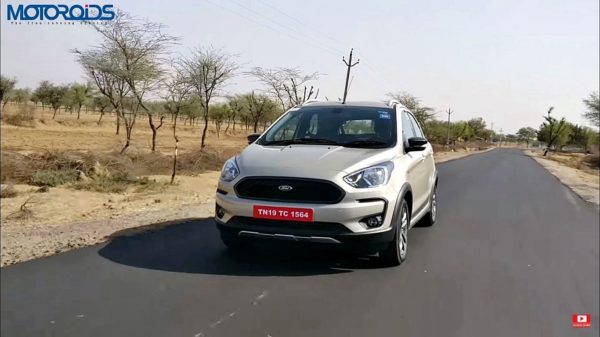 The new 1.2 litre engine has low end tractability and smoothness as its high point. It’s very torquey and moves without a splutter or resistance right from the bottom of the rev range. Even at idling engine speeds of 1000-1200 revs, this engine allows you to potter around in higher gears without threatening to come to a coughing halt. The pull gets more reassuring as you reach 2000 revs, though it’s at 3500 rpm that you feel a step up in power, and feel the engine coming to life. The three pot motor gets a bit noisy post 3500 revs, and while there is hint of sportiness to that note, it may not sound nice to everyone. Engine revs to 7000 clicks, where the limiter cuts in, though the tacho has been redlined at 6500 rpm. There is strong pull to felt all the way to the end of the rev range, and the new engine, with its 96PS of class leading power and 120Nm of torque does introduce you to its strong character quite clearly. It’s not an entirely free-revving engine, but it isn’t lazy either. Mash the pedal, and the tacho needle shows willingness to swing towards the redline, though the Swift’s Japanese unit is still the most free-revving unit within the segment. 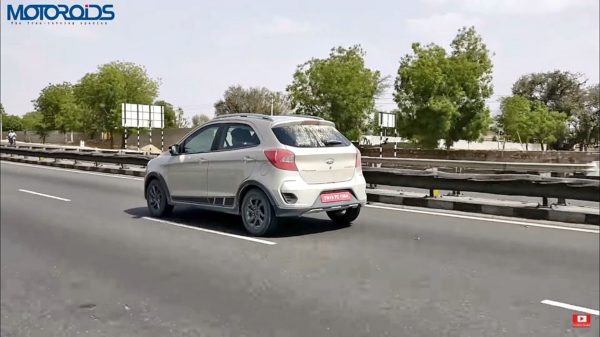 The new transmission has short throws, and feels nice to operate. It has lost the rubberiness that dogged the Figo, and feels much slicker and nice. There is a wee bit of notchiness to it, although it’s still overall a nice gearbox – not the best, but nothing to moan about either. The clutch is now light, and according to Ford, the new transmission also requires 40% less oil. 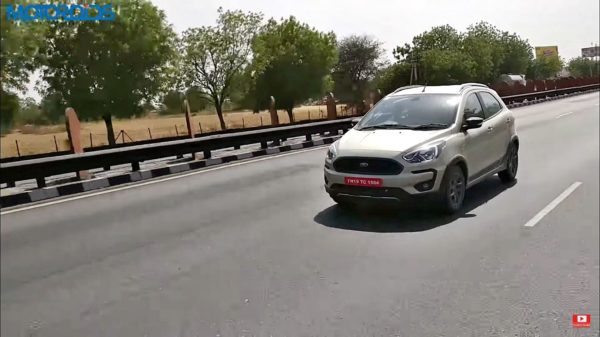 In terms of fuel efficiency, the Freestyle’s claimed ARAI mileage figure is 19kmpl, which is good, though not class leading by any measure. Based on our experience with the 200 km roundtrip we made to Sambhar Lake near Jaipur, we think the Freestyle petrol should return 12-13 kmpl within the city and 15 kmpl or a little more on the highway. 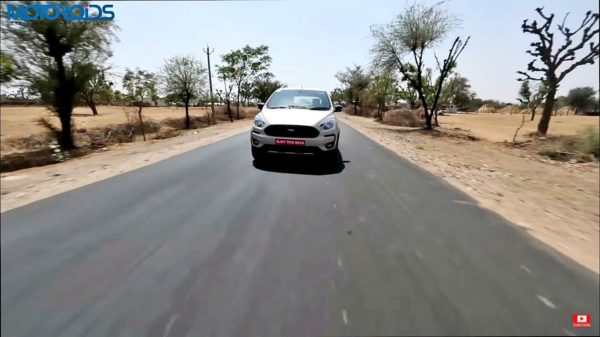 Taking the strong performance, class leading output figures and the new transmission into consideration, one has to admit that Ford has done a good job. This engine-transmission combo is a capable offering, and would go a long way in garnering more buyers in the petrol category for the brand. 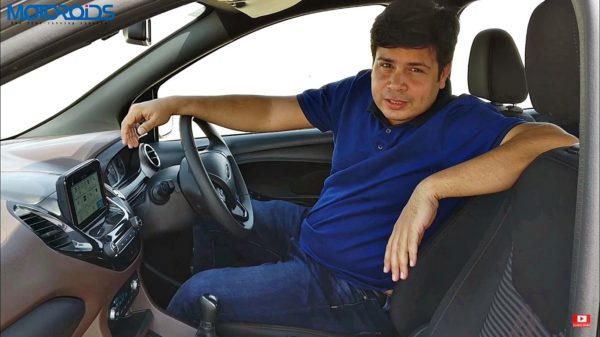 Big changes have been made to the Figo’s cabin to give it a fresh new look for the Freestyle. The dash is now done in a two tone tan-black, which looks nice, though it may not be to everyone’s taste. The steering wheel feels nice to hold, is an EPAS unit, has been tuned specifically for the Freestyle and comes with mounted controls. 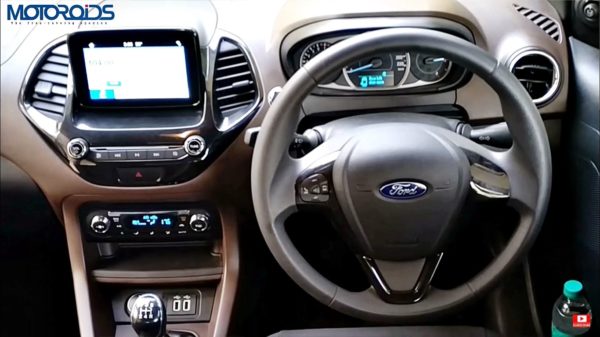 The biggest change here is the freestanding touchscreen with Ford’s Sync 3. The screen, with a rich resolution and fabulous typography, menus and icons is a joy to use. The controls are very intuitive and it can mesh very well with your smartphone too. Ford has invested a lot of efforts in refining Sync 3 to make it as user friendly as possible, and it really shows. The voice command recognition on the system is also pretty good. The audio sounds pretty well too for the class. Sync 3 works very well with Android Auto and Apple Car play, and you can use navigation on the central screen using Google Maps from your phone. A comprehensive video, explaining all the features of the Sync 3 system is provided below.

The instrument console is minimalistic, and comprises of a fuel guage, speedo and tacho, with a digitial MID showing important data such as distance to dry and average fuel efficiency. It also has upshift and downshift suggestions feature. 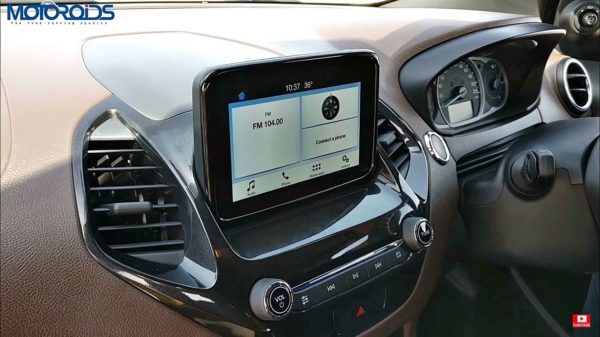 Storage spaces include a rubberized platform under the instrument console, a cavity near the handbrake, followed by two cup holders and another bottle holder meant for the rear passengers. The front door panels have space for two large sized water bottles and then some, though the rear doors don’t have any storage space, which is rather surprising. The glove box is medium sized, and is not chilled. The car gets automatic headlamps and rain sensing wipers too. 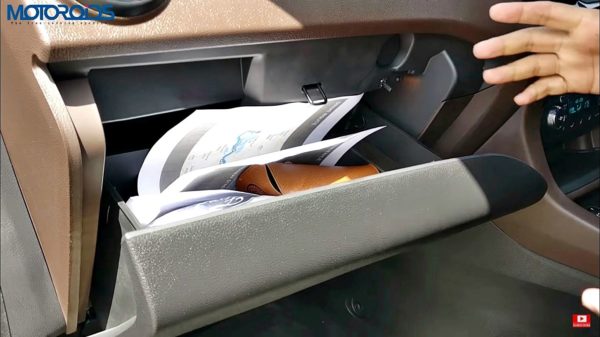 The seats up front are well built and provide great under thigh and back support with good bolstering. The driver’s seat is height adjustable too. The automatic climate control AC unit is pretty strong and chills rather quickly, though it’s controls could have looked and felt a bit more modern. Ergonomics up front are pretty good and the front passengers shouldn’t really have anything to complain about. The Freestyle scores pretty well in terms of the front passengers’ comfort. The dash and the cabin is built solid, and would last, though some parts of it could have done with softer to touch materials, and a more modern theme. 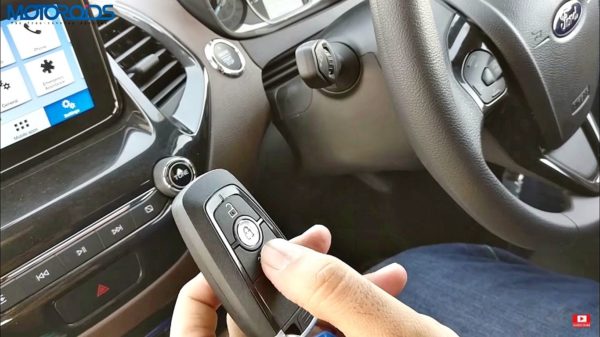 At the rear, the seats are very comfortable, and the kneeroom is pretty good too. The headroom should be sufficient for blokes who are up to 6 feet tall, though beyond that one might find his head brushing with the roof. There’s space to seat three abreast for short to medium rides, though for longer distances it would be a squeeze. The rear seats don’t have adjustable headrests, which is not good from a comfort perspective. The integrated headrests are not good enough to provide support for long journeys. 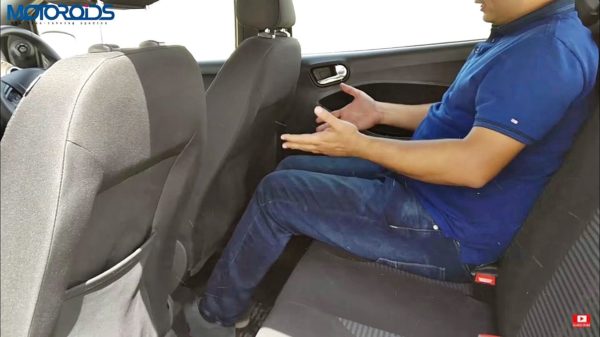 At 257 litres, boot space isn’t the best, but not too bad either. The loading lip is pretty high though, which means putting stuff inside and taking it out isn’t very easy. The boot area also comes with a rubberized tray-like mat to prevent stuff from bouncing about. 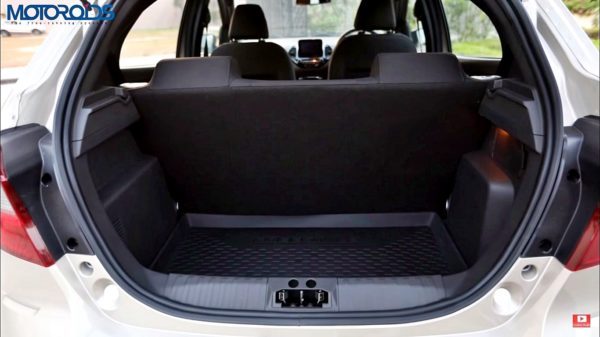 Inside the cabin, the sound deadening is pretty good and wind noise, as well as ambient noise is very well controlled. Road noise does filter in though and thuds and bangs from rough surfaces is quite audible inside the cabin. Overall insulation is pretty good though, and nothing to complain about. 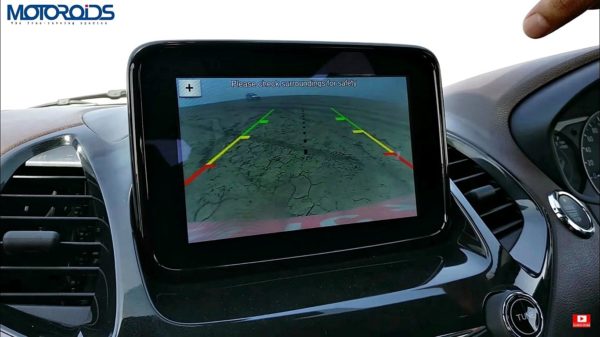 In terms of active and passive safety features, the car gets ABS, up to six airbags (titanium+), traction control, Hill Hold Assist, reverse camera with sensors, and Active Rollover Protection which applies brakes on specific wheels and cuts torque if it senses that the car may roll over owing to a loss of balance.

Since the clearance has been raised by 20mm over the Figo, one might expect the Freestyle to feel wobbly. Such is not the case though, and the Freestyle drives every bit like a Ford car with predictable handling, great traction from those wide tyres and inspires tons of confidence. 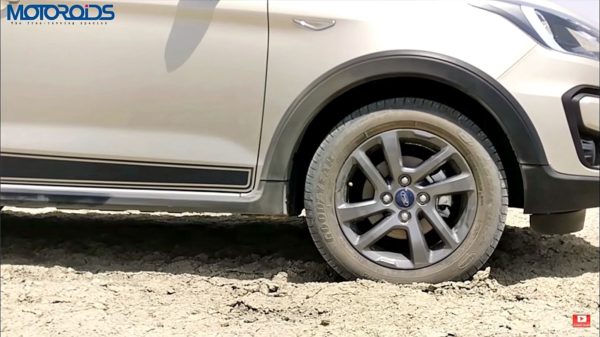 In a bid to keep the handling ability intact, however, the suspension has been tuned on the stiffer side, and it reflects in the way the car rides at slow speeds. There is some degree of bounciness to be felt at speeds below 30-40 km/h, though the ride settles down as the car gathers pace. Overall, the Freestyle is still a tad firmly sprung, and doesn’t offer the cushiest ride. It’s not uncomfortable, nor is it the most supple. It rides like a European car, sprung and damped more towards dynamic ability than a gratifying ride quality. 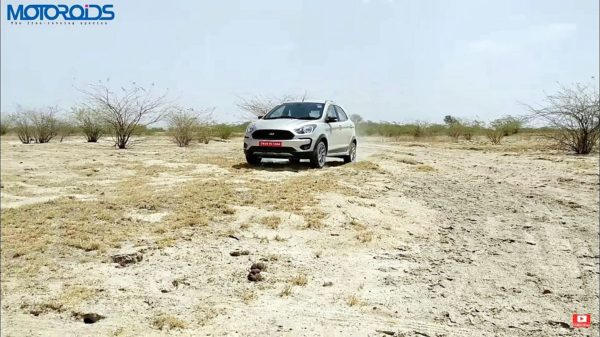 The steering is an EPAS unit and has good weight to it. You can place the car precisely on the road, and the Freestyle does feel very well planted on the road at all times. The steering, however, isn’t very communicative, and lacks feel, which is something we look forward to while driving Ford cars. 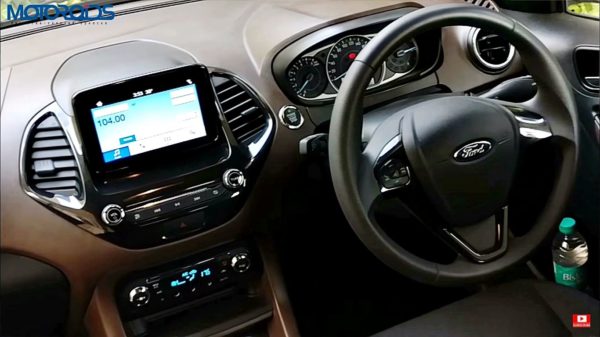 Overall, the Freestyle is an enthusiast oriented car, with solid handling, great dynamic ability for its ride height. Overall, the ride quality is good too, though it isn’t the best in class. 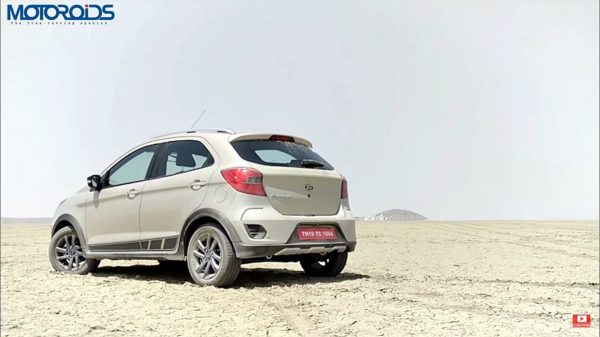 New Ford Freestyle – Summing it up

The Freestyle is a smartly done product. It doesn’t come across as a half baked offering, like a few other products in the category do. It’s well proportioned, handsome to look at, doesn’t have any rough edges and offers a good engine transmission combo along with class leading levels of kit. Save for tje lack  of a few things like projector lamps, DRLs and rear seat headrests, we really don’t have any complaints about it.

It’s built to address a need, wherein young buyers want a capable soft-roader with good ground clearance, some soft roading capabilities, but don’t want to pay the big extra for a proper compact crossover like the Ecosport. And for that specific segment, pricing is paramount. While we love the Freestyle as a product, we’ll reserve our final verdict until the prices are announced.

Here are the complete technical specifications and variants of the new Ford Freestyle (right-click on the image and open in new tab for full-resolution): 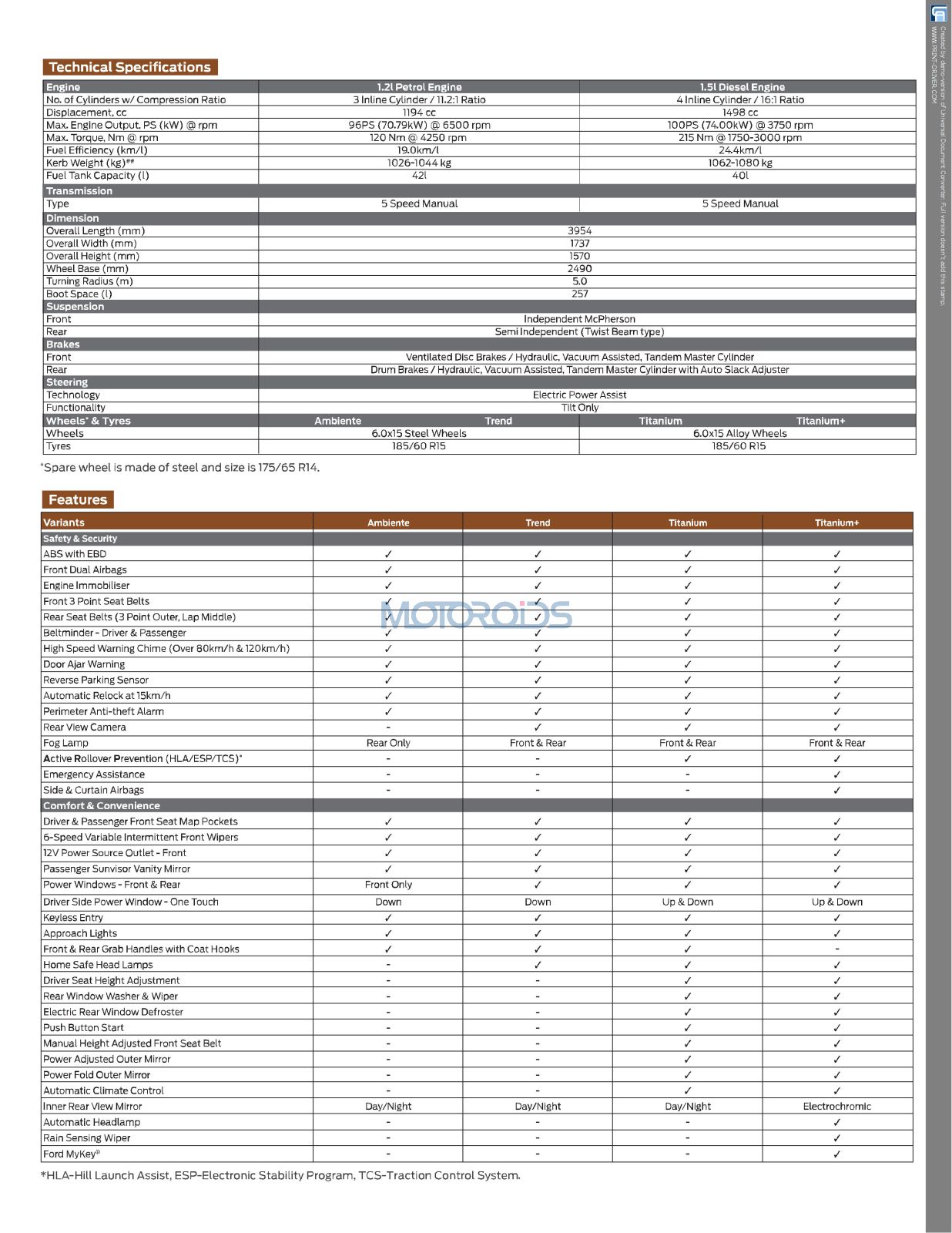