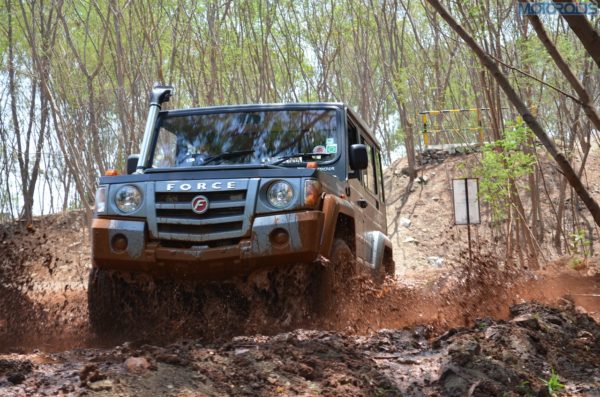 Extreme Off-roader Vehicle– This is precisely what the boffins at Force Motors want the Gurkha to be known as. Not the ones to digest just about anything coming from the marketing guys at auto manufacturers, we almost decided to add a fistful of salt to the car maker’s claim. However, something inside us kept us bugging that there is more about Gurkha than what meets the eye and hence, we decided to spend a day with the SUV from the Pune based car maker. 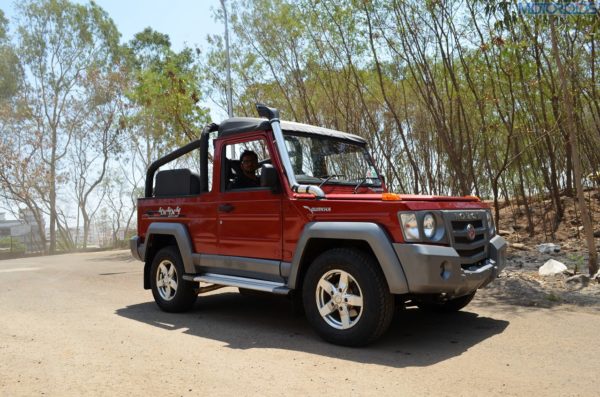 For those who aren’t exactly clued in about the off-roaders and mud plungers in India, the Gurkha is a Maruti Gypsy and Mahindra Thar adversary and aims to appeal to those who are looking for a genuine off road vehicle, this side of the SUVs retailing for more than INR 10 lakhs. The Force Gurkha isn’t a new vehicle. The SUV was first launched way back in 2008 and was exported to German car market. Force Motors did sell some 40 units of the vehicle in Indian car market but the lack of demand coupled with a ‘not-so-wide’ sales and after-sales network ensued that the Gurkha was never mass produced for India.

Enough has changed since then. While Indian car market is fast embracing niche segments such as that of hard-core off-roaders, Force Motors has been through a transitional phase of sorts and has ventured into the private car market in the country by launching products such as the One SUV. Force Motors has also re-launched the Gurkha and has decided to be more generous to India by launching the rugged looking SUV as a mass-market product.

Force Motors is pretty serious about making Gurkha a success story in India and the Gurkha facelift that you see on this page is the result of extensive R&D and real-world testing. Force Motors made it a point to collect feedback from existing Gurkha customers before deciding to work the magic of its scalpel on the SUV. 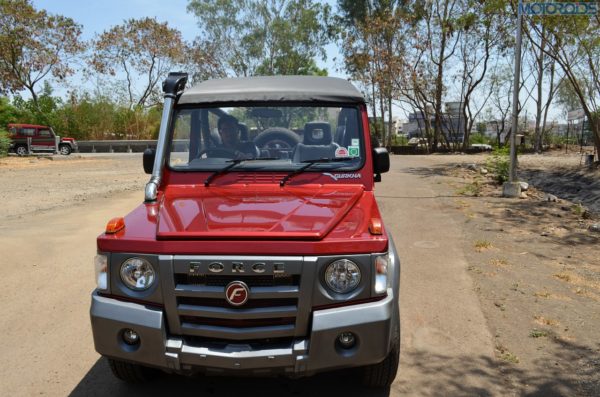 The end product is the Gurkha facelift, which not just looks more modern than the earlier model but also gains a lot in terms of equipment and comfort.

The Force Gurkha facelift is underpinned by the older model’s chassis and comes with the same body shell, along with retaining the Mercedes-licensed OM616 four cylinder diesel engine. Talking about the powerplant, the motor has been tweaked to produce a higher power output of 80PS@3200 RPM and a healthier torque figure of 230Nm@1800 RPM. A quick look at the torque curve reveals that the engine has got a significantly more linear torque curve, with enough low end grunt to help the Gurkha tackle the obstacles. 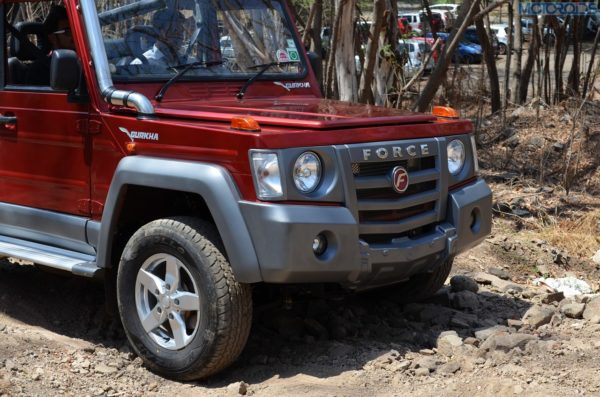 The SUV gets a revised front fascia that sports a new bumper, new grille, clear lens headlamps and fog lamps. Other changes are inclusion of a foot board, addition of a snorkel (yeah, you read it right) and a set of five spoke alloy wheels that have been borrowed from the Force One. Changes to the interiors include a new two tone black beige dashboard, new bucket seats with armrest for the driver and front passenger and a four spoke steering wheel. New features include an air con and power steering.

Genuine off roader credentials such as having a four wheel drive system, differential lock on both axles, 210mm of ground clearance, 37 degree approach angle, 34 degree departure angle and 550mm water wading capacity meant that Force Motors’ claim suddenly seemed to be a lot lesser far-fetched to us. 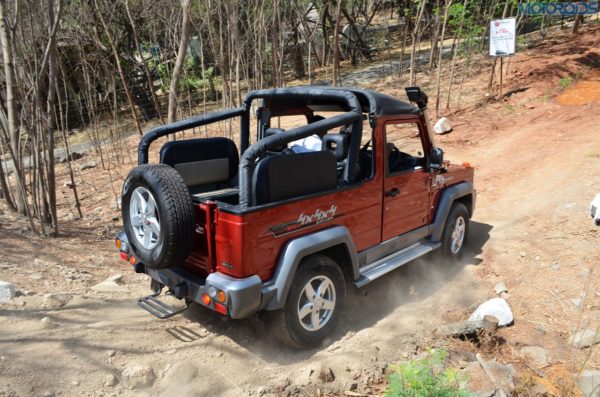 We tested the Force Gurkha on the same off-road track that helped engineers at Force Motors fine tune the Gurkha facelift. With the kind of excitement that a kid experiences just before his first-ever roller-coaster ride, I got into the refreshed SUV and turned on the ignition. The engine came into life with the kind of soundtrack that you would expect to come from an old school diesel engine. The Gurkha’s diesel engine comes mated to a 5 speed manual gearbox that has an unconventional shift pattern. With the first cog selected, I nervously but eagerly floored the gas. The reassuring smile from the co-driver, an official from Force Motors, did help with getting rid of the slight nervousness. 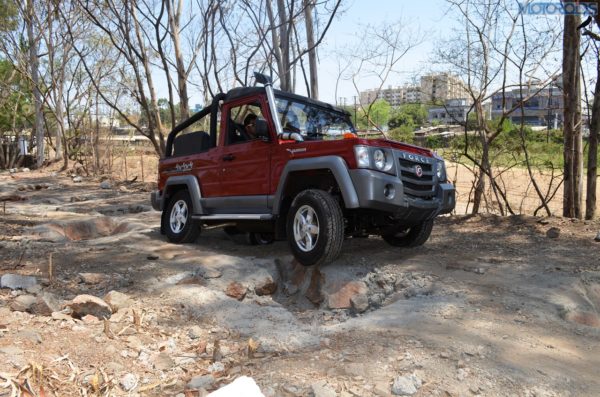 At speed of about 20 kmph, with me holding the large ‘bus-like’ steering wheel tight, the Gurkha approached the first section of the off-road track. This section consisted of some craters that looked deep enough to swallow a Maruti 800, entirely. A couple of craters later, the front right of the Gurkha kissed the land with a big thud and regardless of increased throttle inputs and slipping the clutch, the SUV won’t budge. The nice fellow from Force Motors asked me to shift into 4H and try again. Seconds later, his advice worked and the SUV sailed through the next few craters. However, putting a brief pause to the Gurkha’s outing was the last of the craters, which looked deep and wide enough to scare the meanest of all off roaders ever. Again, the well knowing co-driver requested me, a noob at off roading, to shift into 4L and retry. Needless to say, we were soon seen successfully fighting off all the obstacles that came our way and suddenly, I found myself murmuring a “not bad” to myself. 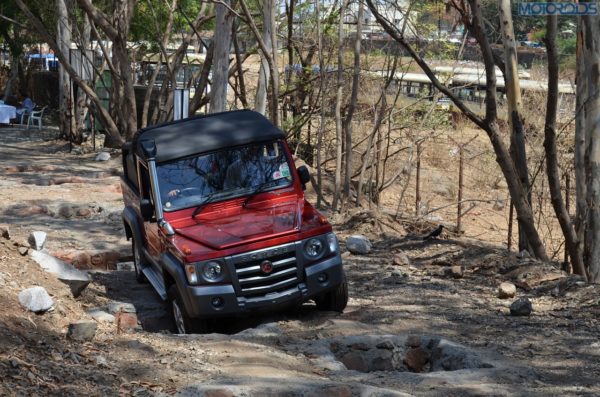 A few metres ahead of the craters, we approached a 25 degree incline that ensured that I had to again look at my dear co-driver for some more help. This was when he decided to pull off a magic trick and asked me to lock the rear differential. With enough enthusiasm, I did as asked and got ready to floor the pedal and scale all that height with assistance from the momentum that I planned to build. My plans were however soon cut short and I was told to simply slot into the first gear and just sit back and control the steering. This is precisely how I got to know of the new Gurkha’s crawl feature, which helps you relax by leaving the task of giving the engine the required throttle inputs to the ECU. 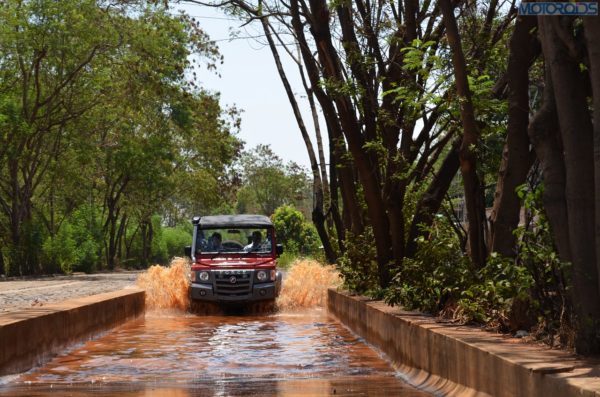 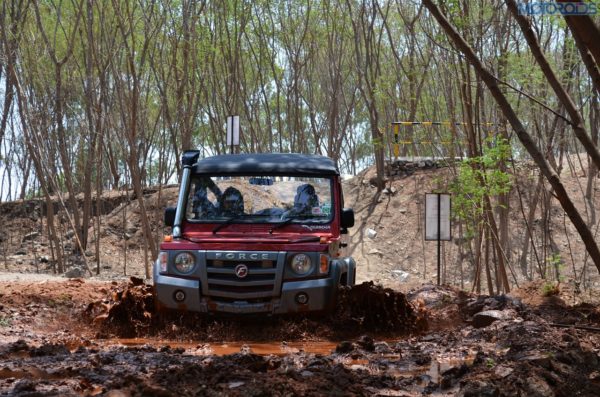 As was pretty obvious to me by then, the Gurkha is capable of dealing with all such obstacles with quite aplomb. The Gurkha ‘sailed’ through most of the hurdles that we met on the track and got stuck just once more. By then, I knew what to do and locked both the differentials and marched ahead with more confidence and reassurance. The lap also saw our Gurkha indulging in some water wading and making its way through the slush. 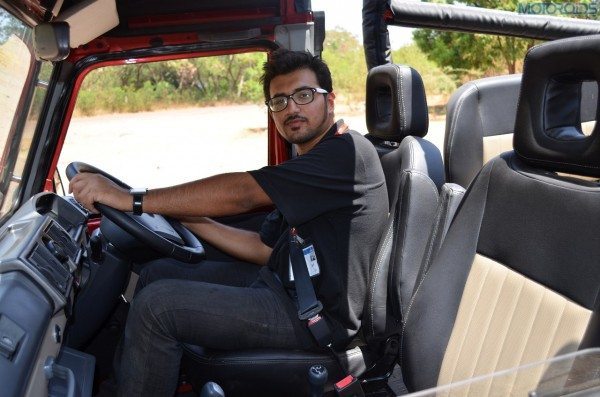 The fact that I was grinning from ear to ear at the end of the fun filled-lap was testimony to the fact that I had one of the best drives of recent times. This is saying a lot, especially if you consider I recently drove a really fast German car and a very quick Japanese bike.

The remaining part of the afternoon was spent doing at least a dozen more laps in the Gurkha and each time, the SUV seemed to mock at us for ridiculing the manufacturer’s claim, about which we talked in the initial part of this story. 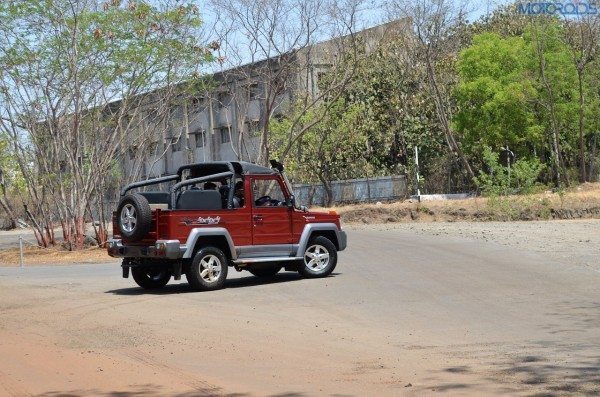 We did drive the Force Gurkha on tarmac but honestly speaking, the Gurkha is in its prime only as long as it is off the road.  On road, things like a ‘not-so-smooth’ engine and hard gearshifts get highlighted. As expected from a SUV in this segment, the Gurkha doesn’t have the road manners of a German sedan and suffers from quite a bit of body roll. As is obvious though, the Gurkha can easily deal with most undulations that our roads have on offer.  We also managed to see close to 100kmph on the speedo and the Gurkha can surely be used as a second or third car in the family. 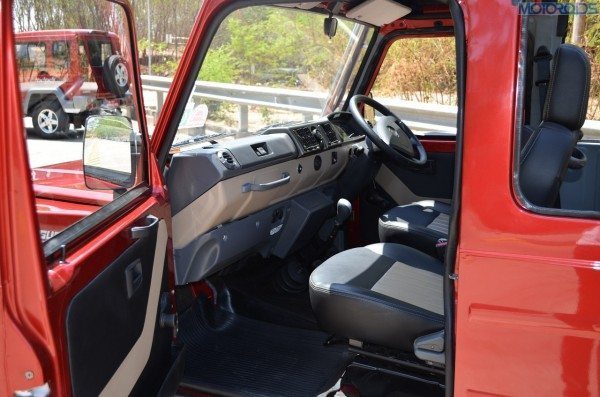 Talking about things inside the cabin, the black and beige theme for the dashboard looks quite good and the quality of plastics and materials is good bordering average. The AC is pretty powerful and can cool the cabin quite quickly. No CD or USB player on offer but when was the last time you heard to Justin Timberlake when off-roading?

We won’t talk much about the on-road behaviour of the SUV. Force Gurkha definitely delivers what it promises. If there is any Indian SUV that enables you to “make your own road”, the Force Gurkha it is. 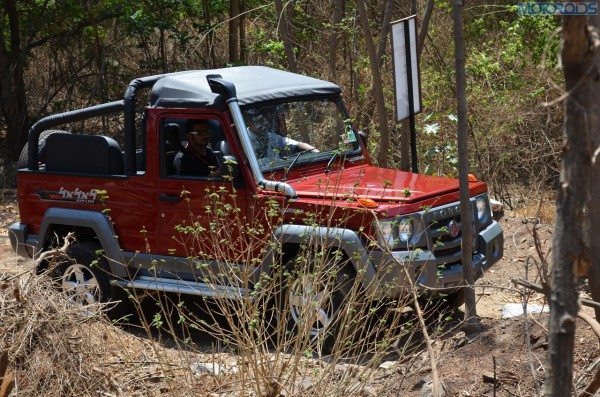 The Force Gurkha is surely an underrated vehicle. In a world of off roaders where the Gypsy and the Thar rule the roost, the Gurkha comes across as a dark horse that is confident of its capabilities but needs not be in the limelight to prove a point to anyone. The Gurkha sticks out its tongue at all the pretentious SUVs out there and doesn’t give two hoots about not offering a refined engine and slick gear shifts, for it knows that what it offers is conspicuous by its absence on the most polished of SUVs of all times.

The Gurkha is available in three paint options- Copper Red, Dragon Green and Matt Black. The Gurkha also offers two body styles- 3 door hard top and 3 door soft top. While the hard top gets front facing rear seats, the soft top gets benches facing each other at the rear.

The fully loaded Force Gurkha, which comes with all the off-roading equipment and AC+Power Steering, goes on sale for about INR 8.3 lakhs. There is also a base variant, which is stripped off the off-road credentials and has a 4×2 layout, and can be yours for about INR 6.3 lakhs. This variant looks almost the same as the fully loaded model and could appeal to the proverbial ‘poseurs’. Force is pretty confident about the reliability and ruggedness of its new baby and is offering a segment leading three-year / 3,00,000 kms warranty on the Gurkha. Deliveries of Gurkha is expected to begin next month and the vehicles have already started reaching the dealerships.

New Force Gurkha at a glance —

— 4WD with differential locks on both axles

— Side steps and fog lamps