On a joy ride to Pune, our boy, Deepak Dongre, got a chance to see a long line of upcoming Bajaj test mules on the test runs and his wit of buying a DSLR, after misplacing two already, really came handy! Now what appears to be a set of regular spy images, reveal something pleasantly surprising. The Bajaj Pulsar 200AS is no secret and we already have reported sightings of the motorcycle. But these latest set of spy images reveal that Bajaj might be working on a lower capacity (most probably a 150cc) motorcycle to don the Adventure Sport nomenclature. As we reported earlier, Bajaj plans to introduce as many as six new products and we can slowly see the list completing. 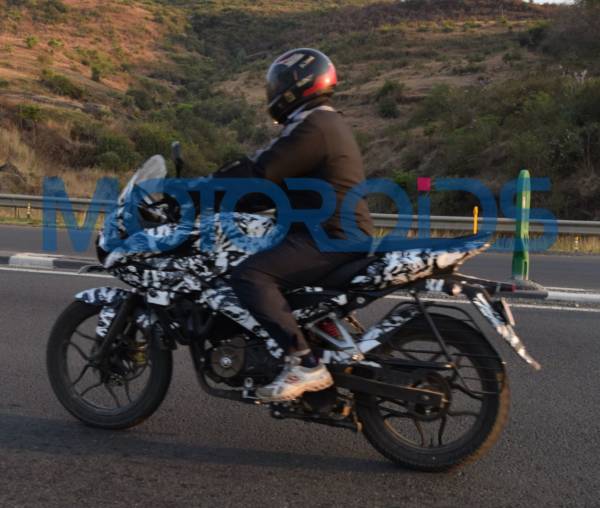 So what makes us believe that it is a Bajaj Pulsar 150AS Adventure Sport series motorcycle? Unlike the Pulsar 200AS, the motorcycle in the photographs reveals a few mechanical changes. The rear brake, for example, on this test mule is a drum unit instead of a disc that we have seen in the earlier spy images of the Bajaj Pulsar 200AS. The front disc brake too appears to be smaller than the Pulsar 200AS. Moreover, this motorcycle did not have a liquid cooled engine which further makes us believe that this is indeed a lower capacity Adventure Sport series motorcycle. Other changes include smaller profile tyres, a slightly smaller swingarm, different rear chain sprocket, a different saree guard and the addition of a centre stand. And although it is not visible in the photographs, Dongre also saw a Pulsar 200AS like projector setup on this motorcycle. 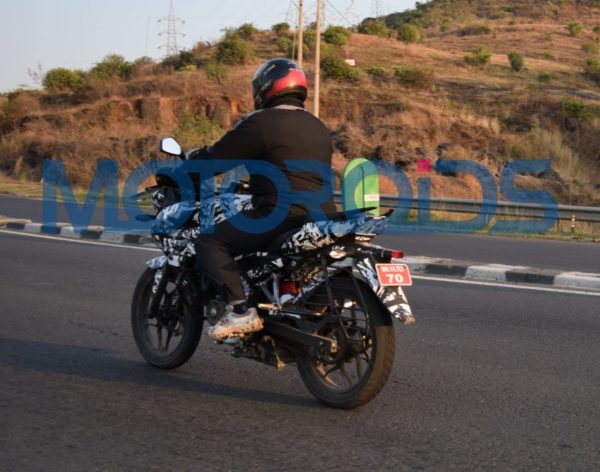 Leaked specifications from a Turkish website reveal the technical specifications of the 150cc variant of Bajaj’s Naked Sports (NS) series and we expect to see the same motor on this smaller capacity Adventure Sport series motorcycle as well. The 2015 Bajaj Pulsar 150NS and the AS150 will be equipped by a 4 valve 149.5cc single cylinder air cooled engine churning out 17 ps  of power at 9000 rpm and 13 Nm of maximum torque at 7500 rpm. The new Pulsar 150NS will receive a 5 speed gearbox. 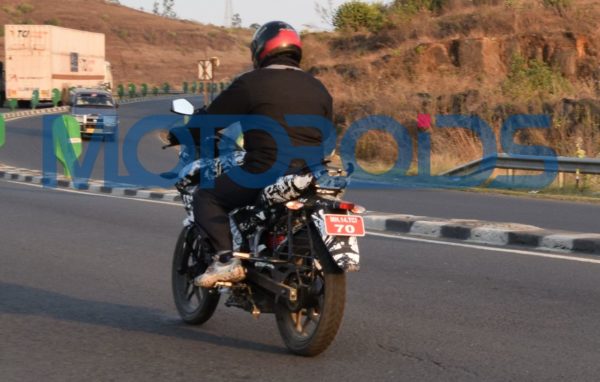 We really cannot pinpoint on the expected price range but we hope Bajaj manages to keep final price between the Rs 80,000-90,000 zone which would really help the Indian two-wheeler major clock good sales.  We are really happy to see this smaller capacity and more affordable Bajaj Pulsar Adventure Sport motorcycle and we hope to get our hands on the machine soon! What do you have to say about this lower capacity Bajaj Pulsar Adventure Sport series motorcycle? Do let us know your thoughts and opinions through the comments section below.