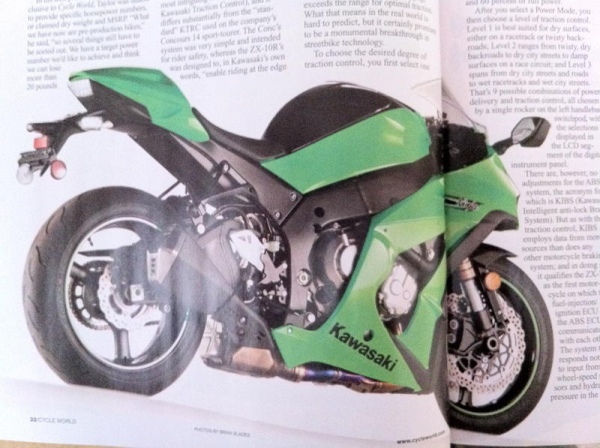 The official images and rough details on the eagerly awaited 2011 Kawasaki Ninja ZX-10R have leaked on the internet (Gosh, we don’t like calling these incidents accidental anymore). Cycle World, one of the better known bike publications in the world seems to have published information that Kawasaki didn’t want out in the open. The model will be unveiled officially on October 5, but CW’s latest edition already has a fair bit of info about the new Kwacker which is branded as a potential BMW S1000RR basher, and put the ball back in the German court.

Although Cycle World is claiming a 200bhp peak power output, other sources on the internet claim to have talked with Kawsaki who have clarified that the figure is just an estimate. The company hasn’t apparently arrived at any specific peak power output figure and will do so only once the exhaust meets noise regulations. However, the new bike beating the BMW S1000RR in peak power is almost certain.
The Cycle World issue that carried the pictures of the new bike is apparently a pre-relase copy of the magazine which reached the newsstands in LA ‘accidently’ (too many accidents). Stay tuned for more updates! Find more images of the new bike below..