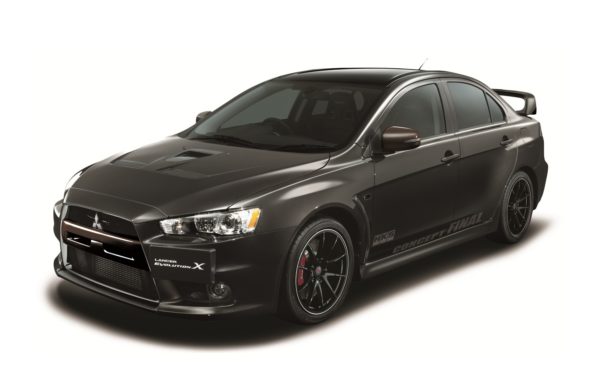 The Evolution suffix to the ho-hum Lancer sedan has been making knees weak and palms sweaty ever since it’s first iteration came out in 1992. The current Evolution, the tenth in line (X), will cease to exist by the end of next year, and in a move that’ll make fans’ and purists’ eyes well up with tears , Mistubishi has confirmed that the iconic, rally-bred, AWD sports sedan will be replaced with a hybrid crossover, marking the end of an era.

In a fitting goodbye to the legend, Mitsubishi will be launching the Lancer Evolution X Final Concept at the 2015 Tokyo Auto Salon in January.  Armed with 473 hp, it’ll be the most powerful Evo to ever roll off the assembly line. Based on the already hotted up Evolution GSR, Mitsubishi added a HKS-upgraded turbo, intake, exhaust, fuel management, and ECU software to squeeze 182 extra horsepower out of the 2.0-liter four pot unit. HKS’s Hipermax Max4 SP adjustable suspension controls body motions, while sticky Yokohama Advan Neova AD08R tires wrapped around 19-inch Volk Racing RAYS G25 wheels send the power to the ground.

The body-work has been treated in matte black, highlighted by dark chrome accents, while the door sills scream “Concept FINAL” in big, apart from a HKS logo on the front fenders. The all-black interiors get racy red stitching on the seats. Goodbye Evo! You’ll be sorely missed!