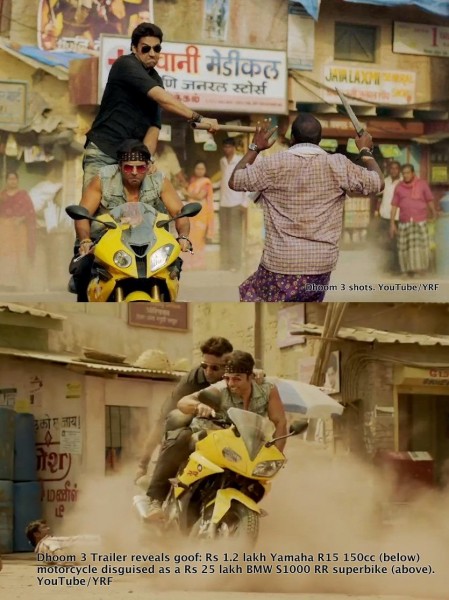 Bored with the way your R15 looks? Want to ‘modify’ it to make it look like something more exclusive but don’t have enough dough? Don’t mind a ‘jugaad’ of a mod-job?

The latest Dhoom 3 Trailer comes to your rescue if you replied in affirmative to all the above! 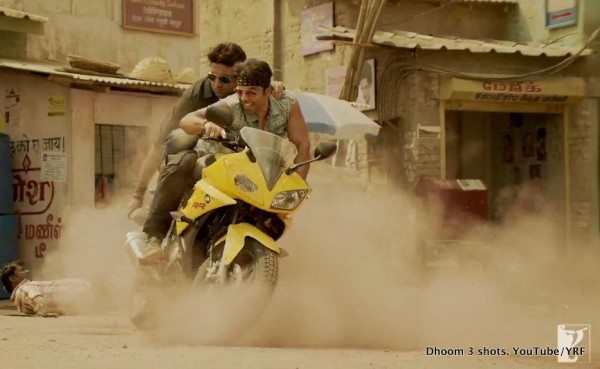 The latest trailer of Dhoom 3 is suddenly all over the cyber space and gives us a glimpse of the action that the upcoming Dhoom 3 promises to bring along. It also gives us a glimpse of a R15, which is trying a tad too hard to pass off as a BMW S1000RR! Yes, if you have a good look at the lead image (courtesy: Rushlane), it can be seen that while Abhishek and Uday have been shown riding a BMW S1000RR in the upper half of the image, they are seen perched upon a Yamaha YZF-R15 in the lower image. It is interesting to note the way the movie makers have tried to ‘camouflage’ the R15 to make it look like a S1000RR. Little do they seem to know that we know better than to fall for some really ‘cheap tricks’.

Taking into account that the Dhoom 3 is an ‘action packed’ movie, the producers probably resorted to using a R15 (Costs approx INR 1.2 lakhs) instead of the BMW S1000RR (Costs approx INR 20 lakhs) during some of the ‘more dramatic’ action shots, probably in a bid to keep the Beamer away from potential damage. 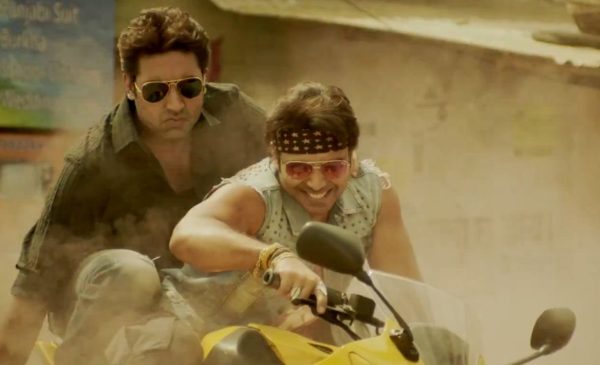 “Because we are too cool to wear a helmet”

And the fact that both the riders have been shown WITHOUT a helmet means that the movie makers receive some more flak from us. There is no denying the fact that youngsters look up to these actors (and movies like Dhoom) and often resort to similarly crazy antics in a bid to mimic them.

Finally, before you may decide to try and advocate the stupid antics shown in the trailer, please relax, calm yourself a little and ask yourself- Is this what you really want a Made in Bollywood bike flick to be like?

Special thanks to our friends at Rushlane for the pics