Home News Chevrolet might put the Sail on sale in India 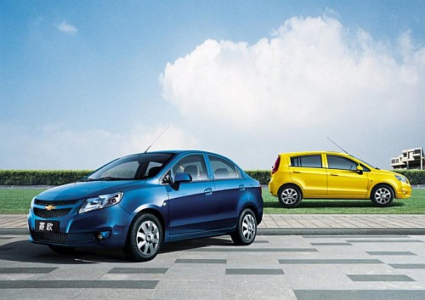 Chevy, er, Chevrolet India has a good amout of experience of the Indian market. And they know what suits the customer and the market here. And now Chevrolet India has something special lined up for us. No they aren’t bringing the Bumblebee. Instead a small car and a sedan combo, Sail as it is known in the Chinese market where it was launched recently was made keeping the developing countries(including ours) in mind could be finding its way to the Indian market. Rumours suggest that the car will be available by 2011.

The car has a clean design which looks pleasant, it wont attract hotties at the night club though. The bonnet has a muscular crease running across it which looks good and adds character to the car’s styling. It looks good with the wheel arches and a slightly big bumper up front. The car bears a resemblance to the bigger Cruze as well as the Beat, and you wont mistake it for anything other than a Chevrolet. Engine options arent final yet though the 1.2L engine doing duty in the Beat could be one of the options. Interior and creature comforts will be adequate enough to get this car a share of the market, if not stir the market. From the pics the car looks quite spacious, which will be appreciated by the market here.

Whether this car has the potential to increase Chevrolet’s market share in India is yet to be seen. Lets wait till the car makes its Indian debut to have a clearer picture.