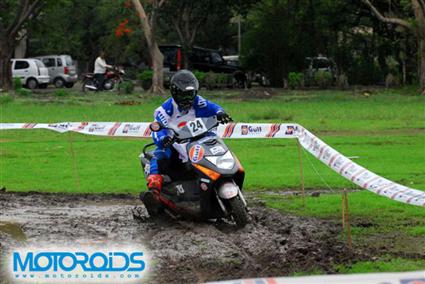 Pictures by Ronak Mistry & Sportscraft
It had been a shock and a rough time for Gulf Oil and Sportscraft owing to the all of a sudden denial of permission to organize the Gulf Monsoon Rally in its regular location in Navi Mumbai. But somehow, the Motorsports God seems to be in a good mood and sent Mr. Jamshed Godrej to the rescue. Thus, the Rally was held on the Godrej Ground at Vikhroli on the 13th of June, 2010. The event was flagged off by Ravi Chawla, President of Gulf Oils Lubricants.
Shamim Khan from Nashik bagged the title of ‘Winner’ for this year’s Monsoon Rally by competing on a Mahindra Rodeo. On the second place was defending champion Rustom Patel. The third, fourth and fifth places were grabbed by Mansingh Thakur, Ganesh Lokhande and Vineet Kurup who also hailed from Nashik. Pune based Aloke Bhangre was selected as the best first timer owing to his spirited riding.
The first stage resembled autocross where the riders tackled a serpentine course and were timed to the hundredth of a second. Shamim’s talents emerged in the second stage as he ran into the face of victory. Shamim had received the support and sponsorship of Mahindra which in all supported 3 riders for the event.
The course was not a piece of cake and demanded utmost care at various hair pins and steep inclines. Almost all riders had to tumble down at least once bringing damage to a few scooters.

POSITION COMP NO NAME OF THE RIDER MAKE TIME Origin