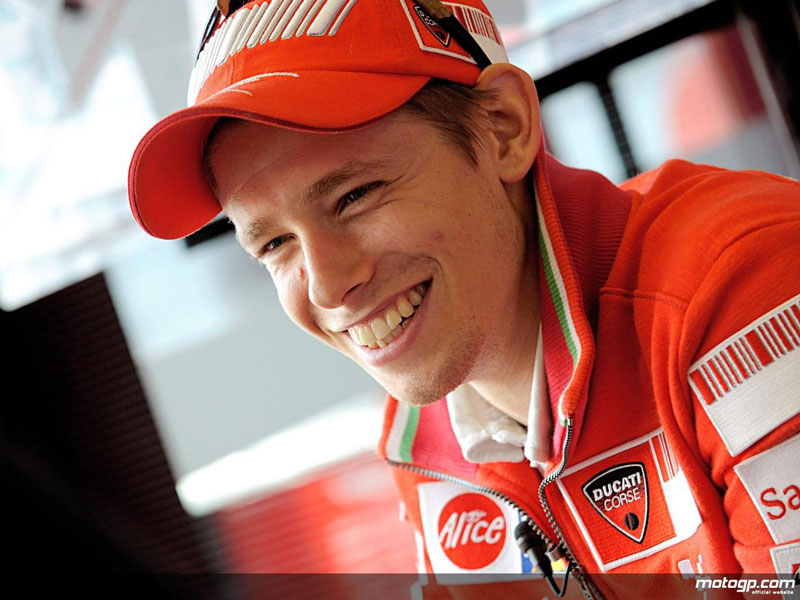 Rumours galore. First it was Rossi shifting to Ferrari and now its Casey Stoner’s shift to Honda that is making everyone jump in their seats. Well quite literally! The Aussie has been doing great in Ducati. Though there have been bad moments where he used to lose his lead by falling off, he was happy with the bike. He is the only rider for Ducati who has such a nice chemistry with the bike which is quite evident from the results. His team-mate Nicky Hayden wasnt comfortable with the bike till this year when he shocked us all with unbelievable performance of his on the Italian bike. But it was Casey who was in the spotlight everytime. Be it because of his championship win or his coordinaiton with the bike.

Italian website Sportsmediaset’s report suggests that the Aussie will move to Honda the next season replacing Dani Pedrosa. It also suggests that Ducati’s former manager, Livio Suppo behind Stoner’s move. There have been rumours about Stoner signing with Honda, but another magazine gpone.com contacted Suppo regarding this but he denied the reports.

There are reasons for the shift though. First is Stoner’s bad performance last year because of his illness. Secondly Honda doesnt seem to be very happy with Pedrosa, courtesy his 2nd place in Jerez this year. But Dani’s performance report is good enough for any GOOD team to fetch him from Honda. And for Ducati, there are many contenders who could fill the void. Rossi was offered to join Ducati as soon as they came to know about Stoner’s plan, and how can we forget Lorenzo who was once offered twice the money what Stoner gets for the same job, which in fact is one of the reasons  why Stoner is unhappy with Ducati. Or there might be someone new coming from WSBK or similar sports to occupy a berth in one of the teams.

But its too early to say anything and as we all know rumours will keep on coming till we get a concrete statement from either of the teams. Till then it we can enjoy Stoner driving fof Ducati, maybe for his last season in Ducati.