The 13-member Bombay Sappers Bicentenary Motorcycle Expedition was flagged off by senior military officers at Dras on Kargil Vijay Diwas. This motorcycling expedition is being organised to commemorate 200 years of the Bombay Sappers and the flag-off today also marks the 20th year of the Kargil Vijay Diwas. The expedition honours the elite units of the Bombay Engineering Group who participated in this successful operation in 1999. 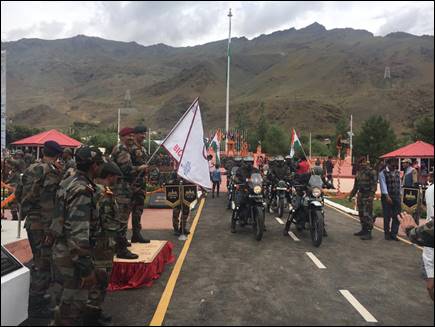 To inculcate a sense of adventure, pride and achievement amongst the fraternity of the Bombay Sappers, the 13 member motorcycling expedition will traverse through challenging terrains covering a distance of 3800 km from Dras to Pune over a period of 22 days. Through the course of the ride, the expedition members will be interacting with various field units and war veterans with an endeavour to honour and complement their contribution to Bombay Sappers and the Nation. This expedition is being done on Royal Enfield motorcycles. The challenging expedition and the outreach with the war veterans and Veer Naris at designated centres is a remarkable tribute to the immortal courage and bravery of the Bombay Sappers and the Indian Army.

The Bombay Sappers officially known as the Bombay Engineer Group has its headquarters at Pune, Maharashtra. The Bombay Sappers have been conferred with many honours such as the Victoria Cross, Param Vir Chakra, Ashok Chakra and French Legion of Honour. The Bombay Engineer Group, or the Bombay Sappers as they are informally known, are a regiment of the Corps of Engineers of the Indian Army. The group has its centre in Khadki, Pune. The Bombay Sappers have gone on to win many honours and awards, both in battle and in peacetime, throughout the 19th and 20th centuries, both before and after Independence. The gallantry awards won include the British Victoria Cross and the French Legion of Honour before independence, as well as the Param Vir Chakra and Ashok Chakra as part of Independent India. The Group has also made its mark in peacetime activities such as sport, adventure, disaster relief, aid to civil authority and prestigious construction projects.