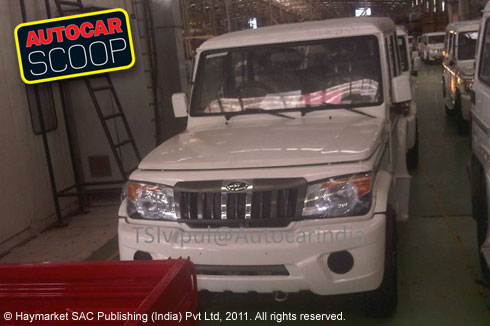 There is a reason why Mahindra is king when it comes to sales in rural India. The company produces vehicles which are built to last, and brave the harshest punishments year on year, without complaining. Only Mahindra Commanders can survive after carrying as many as 20 people for short distance trips in far flung villages. No wonder then, that the Bolero is India’s bestselling SUV (it barely qualifies as one though) for years together.

However, the demands and expectations of the rural market are evolving with time. With the advent of so many international car companies and increased awareness among the B-town motorists, it’s important that even utilitarian vehicles are refreshed from time to time and offered with more features. It’s exactly with that thought in mind Mahindra have refreshed their Bolero. One of the readers at Autocar India have managed to take some spy pictures of this new model in great details. The reader, named T S Vipul took the pictures at Mahindra’s Haridwar facility.

In its latest iteration, the Mahindra Bolero gets some minor tweaks on the exterior, including a revised grille which is now done in a grey shade. The current version has the grille painted in body colour. The front bumper also gets a slightly tweaked look.

Apart from the visual changes, the new Bolero also gets a rear viper and defroster in a bid to comply with upcoming motor regulations (CMVR). The car is still devoid of a foglamp and alloy wheels though. With the upgrade, the Bolero will also add a new, ZLX version to the list of the model’s variants.

The interiors too have witnessed their share of tweaks. In a rather unexpected way, the interiors now sport a digital instrument console – something manufacturers usually don’t employ in such vehicles. The new digital readout shows speed, trip, odo and fuel gauge.

The colour of the plastics has been turned to beige for a more airy and spacious feel within the cabin. The steering wheel too is new, and is now wrapped in leather, with a new aluminium finish bottom spoke. The overall quality of plastics within the cabin remains similar to the current version although the center console now sports a wood finish panel.

Technical specifications of the new Bolero will remain unchanged and it will continue to be powered by the 75bhp diesel mill that current powers it. Expect the prices to remain unchanged too for the current variants. The new ZLX version with a few more features may sell for a few thousand rupees more.