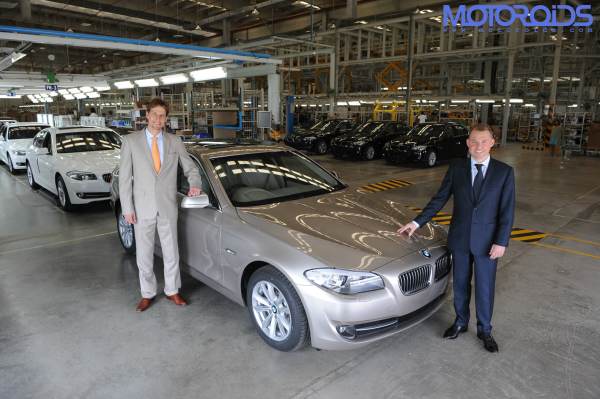 BMW’s Chennai plant rolled out the 10000th car from its assembly line yesterday. It was a major landmark for the facility which started its operations on 29th March 2007. The Chennai plant produces the German company’s 3 Series and 5 Series sedans in petrol and diesel versions. The plant will also start producing the X1 compact SUV by the end of 2010. The plant has an annual capacity of producing 5400 vehicles on a single shift basis.

BMW India has shown really impressive growth in the premium car market for the relatively short period it has been around and has sold cars in very good numbers. In 2011, BMW plans to expand its dealer network by increasing the number of outlets to 22from the current 18. Up to 1200 jobs will be created in the dealer and service network, the company believes.

Speaking on this occasion, Dr. Andreas Schaaf, President, BMW India said “Having taken the lead in the premium segment for the first time last year, we aim to maintain our leading position in the Indian market by now embarking on the second wave of our India strategy. We are confident that we will be able to increase sales substantially over the coming years with exciting new products, now produced in India and the ongoing expansion of our dealer network to reach out to more of our potential buyers.”

“I am convinced that our employees here at BMW Plant Chennai will make a great contribution in strengthening our company’s long-term success in India”, said Mr. Juergen Eder, Managing Director, BMW Plant Chennai.
Globally the BMW group owns the BMW, Rolls-Royce and MINI brands. While the former two are already present in India, the third brand is coming soon to India. The company also manufactures motorcycles and will be bringing some of its two0-wheeled models to the country soon. The company has 24 production facilities in 13 countries and has a global sales network in more than 140 countries.