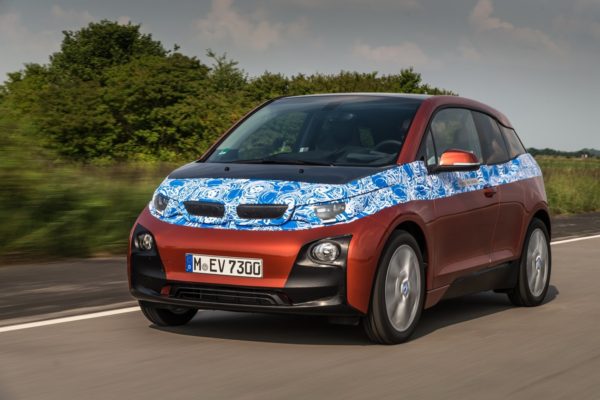 Seen here on these pages is a set of images of the production spec BMW i3 that have been revealed by the Bavarian carmaker. The images show the car without most of the camouflage that we have seen on the car until now.

BMW says that the i3 will deserves the carmaker’s tagline of “Sheer Driving Pleasure” and this would be courtesy the 50:50 weight distribution and a rear-wheel drive layout. As per BMW, the electric engine’s placement on the rear axle is responsible for offering “unbeatable traction” and optimum maneuverability. The upcoming BMW i3 has a turning circle of just 9.86 meters.

The i3 comes with a single-pedal control system, which means recuperation mode is activated as the the accelerator is pressed. The 168hp electric motor gets into generator mode (from drive mode) and starts pumping power into the lithium-ion battery, along with producing a “precisely controllable braking effect”.

The BMW i3 comes equipped with systems such as the Driving Assistant Plus, Parking Assistant, a rear view camera and Speed Limit Info. The car’s battery can be replenished using either a BMW-supplied wall-box or a conventional domestic power socket.

Stay tuned to Motoroids for more info and pics on the upcoming 2014 BMW i3 electric hatchback.

Images and details via Carscoops