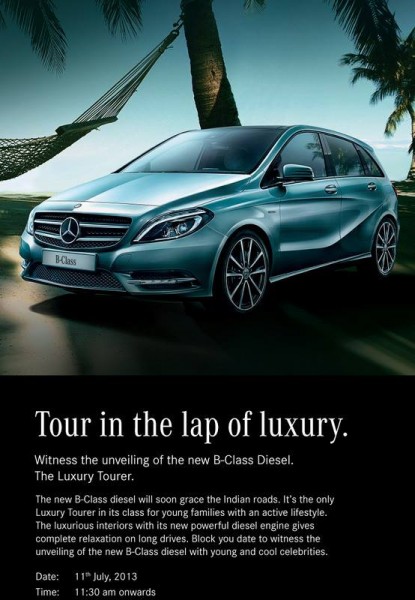 After dozens of launch-date related speculations and months of waiting, Mercedes India, the Indian subsidiary of the famed German luxury car manufacturer, will launch the diesel variant of its B Class in Indian premium car market few hours later today.

Powering the new, diesel variant of the B Class will be the same 2.2-liter four pot oil burner that can be found under the hood of the recently launched Mercedes A Class premium hatchback. This means that the motor will have a max power output of 107.3bhp@3,200rpm and a peak torque figure of 25.5kgm@ 1,400rpm-2,800rpm. The engine will come mated to a 7-speed dual-clutch transmission that will send power to the front wheels of the car.

Worth mentioning here is that the Mercedes B Class, which was launched in our country last year, has been on sale with only a petrol engine variant and the lack of a diesel engine means that the car is falling short of exploiting all the sales potential that lies in the fast emerging diesel premium car segment of our car market. Now, it seems like Mercedes India has realized that there definitely is a large part of the segment which is left to be exploited and has finally decided to do something about it.

In all likelihood, the B180 CDI will be launched in a lower spec ‘Style’ trim that misses out on panoramic sunroof and 17-inch alloy wheels.

Engine sharing with the A Class, along with the omission of some “premium” features should see B180 CDI priced as much as INR 70-90k lower than the petrol variant.

Stay tuned to Motoroids for more details on the “soon-to-be-launched” Mercedes B180 CDI.