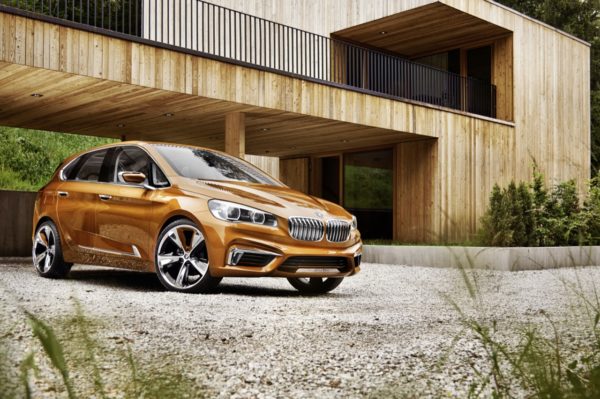 The car that you see here in the images is the new BMW Concept Active Tourer that was recently unveiled at the OutDoor Friedrichshafen trade fair in Germany.
Powering the Concept Active Tourer is the same plug-in hybrid drive system that was unveiled in 2012. This system features a transverse, 1.5-liter turbocharged three-cylinder engine that comes coupled to an electric motor. The electric motor gets its juice from a battery pack that is located under the rear compartment floor.

The bike has a combined max power output of 190 hp and has a peak torque of 147 lb-ft. The car has a claimed zero to 62 mph acceleration run of less than eight seconds. The car has an all electric range of 19 miles and a top whack of 124 mph. The car boasts of a claimed fuel economy of 95 US miles per gallon.
Stowed behind the rear seats can be found two bikes on built-in, retractable carriers. The frames can be locked into place using two rails and brackets on removal of seats and wheels. The wheels can be stored in a holder attached to the right rear seat.

The interiors of the new BMW Concept Tourer Outdoor come draped in a shade of MoonRock Gray and MoonWhite to keep the dirt away.
The ConnectedDrive has a “Heart of the Alps” route guide feature, jointly developed by BMW and the Austrian Tyrol tourist board. This feature provides “exclusive premium routes in the Seefeld, Ötztal and Zillertal regions.”