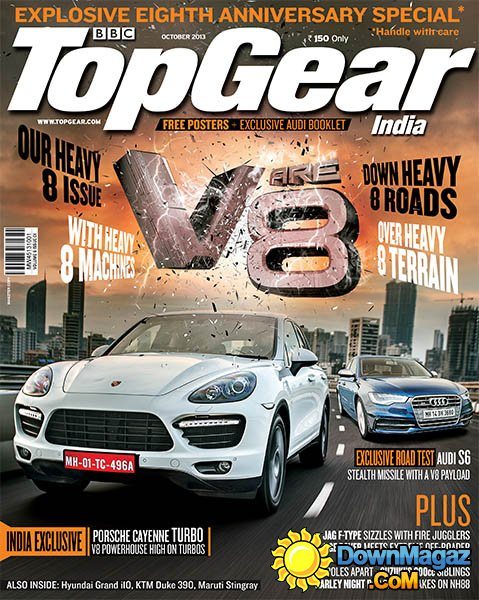 BBC TopGear India Magazine celebrated its eight anniversary with the launch of a special October issue, bringing together the best symbol of the number 8 – the V8 engine.

BBC TopGear India magazine’s eight-anniversary issue gives its readers a feel of new Porshe Cayenne, Audi S6, the Chevrolet Corvette Stingray and amazing machines, all in the same issue. The magazine also features some of the Indian icons like Maruti’s 800cc engine in the Alto 800 and the same engine in a bike, Suzuki Intruder. A special feature on Harley Davidson Night Rod ride in the NH 88 makes for an interesting read.

The magic continues with the Range Rover V8 and the most purpose-built off-roader, the Polaris RZR 800 All Terrain Vehicle.
In a typical TopGear style, the eighth anniversary is rounded off in a flurry of fire and flames as the sizzling hot Jaguar F-Type V8 takes on a bunch of bright and fiery fire jugglers.