Audi India concluded the Indian leg of the Audi quattro Cup 2017 in a closely contested final held at The Els Club in Dubai. In the India final, the pair of Srinivasan Namala and Srinivas Vallabhaneni representing Audi Hyderabad garnered 37 points on a countback of the last six holes to qualify for the World Final to be held from December 1st  to 5th at the Quivira Golf Club in Los Cabos, Mexico. 51 teams will be participating in the World finals after a competitive tournament being held across 47 countries with over 700 tournaments in which 90,000 players participated. 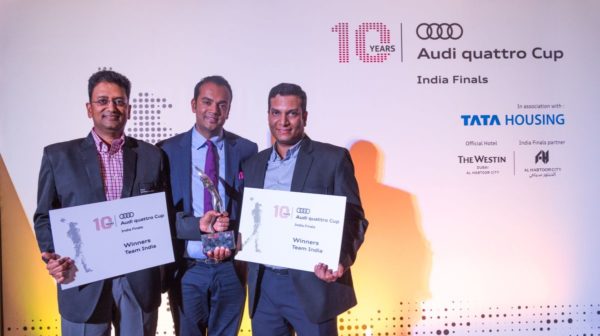 The team representing Audi Bengaluru comprising of Iqbal Sait and Mohan Kumar Venkatappa were pipped to the runners up spot on a countback of last six holes after also finishing with a total of 37 points while the team from Audi Bhubaneswar consisting of Dalbir Singh Arora and Rajnish Das secured the third place with 36 points, beating seven other teams for a podium finish.

The India final of the Audi quattro Cup, in association with Tata Housing and Al-Habtoor City, was a culmination of a nationwide event held across ten cities. Played on the Greensome ‘Stableford’ format, two players of varying handicaps were randomly drawn to form a team.

The winning team from each of the qualifying round played on the ‘Team Stableford on Individual Peoria’
format to earn a spot in the India final. The Indian leg of the Audi quattro Cup is held across the length and the breadth of the country and sees more than 1200 golfers vying for honors each year. Globally, an expected number of over 90,000 golfers will be competing in teams of two across more than 700 tournaments in the Audi quattro Cup in 2017.

Speaking on the occasion, Rahil Ansari, Head, Audi India, said, “For more than two decades, the Audi quattro Cup has been actively promoting golf and has been able to perfectly resonate with the enthusiasm for superlative Audi automobiles. I am happy to share that the Indian Edition of the tournament is celebrating its tenth year in India which also coincides with the completion of Audi’s ten years in India. Audi quattro Cup continues to celebrate the growing fascination for the amateur golf sporting events in India over the years. It was exciting to see the enthusiastic performance of all the participants which complements Audi’s passion for sports and drive for innovation. I wish Srinivasan and Srinivas the best of success in the world finals.”