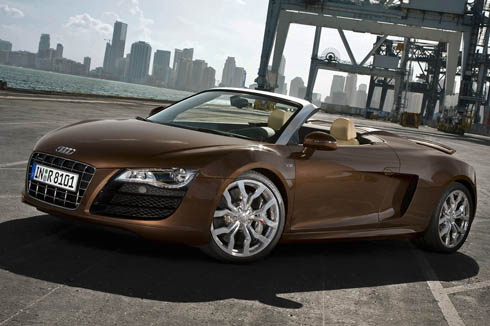 25th March 2011 is going to witness a lot of action in the sports convertible market. BMW India has already announced that it is launching the 6-series convertible in India on the aforementioned date. Now Audi India has also announced the launch of its R8 Spyder convertible. The sports car will be available only with the high-end V10 engine. R8 is already available in the hard-top version with both V8 and V10 engines.

The R8 V10 Spyder is powered by the same 5.2-litre 518bhp engine that powers the hard top V10 coupe. The engine is sourced from Lamborghini, which, like Audi is again a VW Group company.

The topless version has strengthened pillars and chassis to make up for stiffness lost due to the lack of a roof. The soft fabric roof of the car weighs a light 30 kg and takes 19 seconds to be put up and taken off. The roof can be put up at speeds up to 50km/h.

The new car will be imported as a CBU and will command a premium over the hard top R8 V10.