Another day and we’re graced with another game specific car. This time around, it’s an Aston Martin and it’s destined for Gran Turismo 6. To be called the Design Prototype 100 Vision Gran Turismo, this virtual offering from the British manufacturer was developed in-house over a period of six months.

As with all game/movie specific, virtual prototypes, manufacturers give a free reign to the designers who make sure that the exuberance flows. The DP100 is no different. Its styling is a radical departure from the traditional Aston Martin scheme of things. While it is an evolution of familiar elements, it also envisions an Aston Martin supercar of the future with a mid engine layout.

Design director Marek Reichman says it’s more than a mere design exercise and some of the visual cues “could also feed through into future sports cars that we’ll launch in the offline world so the importance of this project should not be underestimated.” 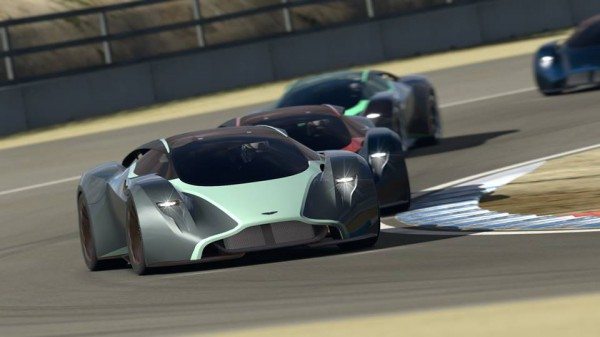 Virtual performance comes from a V12 twin-turbo engine delivering 800 bhp (597 kW). Aston Martin says that the DP 100 manages to offer “an exceptional level of detail with fully functioning suspension system and state-of-the-art electronics” along with “active aerodynamics” which supports the car’s function within the game.

The Aston Martin DP-100 Vision Gran Turismo was revealed at the ongoing Goodwood Festival of Speed and will be available as a free download in Gran Turismo 6 starting next month.

Check the gallery below for more images!