It’s been just a month since 2018 began and its already raining sports cars in India. The first sports car to arrive in India this year was the 2018 Porsche 911 GT3 with a manual transmission, followed by the country’s first all new Rolls-Royce Phantom VIII. Now, India’s second Mercedes-AMG GT-R landed in India and was recently delivered to its owner in Bengaluru. 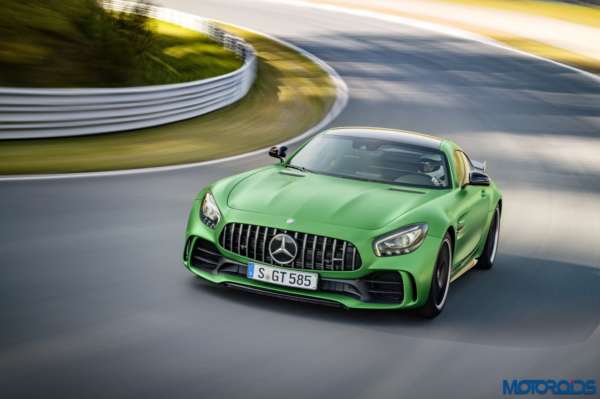 In case you missed it, the country’s first Mercedes-AMG GT-R too was delivered in Bengaluru itself, a region which has arguably become the supercar capital of the country. Coming back to the model, this AMG GT-R, finished in the signature AMG Green Gell Magno paint job, shares the garage with a number of other exotics including India’s only Porsche 911 R, a Porsche Cayman GT4, Porsche Turbo S,  Porsche 911 Carrera S, Ferrari 458 Speciale, Aston Martin DBS, Vorsteiner Novara Lamborghini Huracan and an Audi R8 V10+.

At the heart of the Mercedes-AMG GT-R is a 4.0-litre twin-turbocharged V8 engine that develops 577 hp and 700 Nm of torque. This engine is paired to a seven speed dual dual clutch automatic transmission that propels the model from 0-100 kmph in a mere 3.6 seconds, all the way up to a top speed 318 kmph. The AMG GT-R was launched in India last year, with prices starting at INR 2.23 crore (ex-showroom).