Audi has unveiled the all new 2018 A8 luxury sedan at the Audi Summit in Barcelona. In its fourth generation, the flagship model features new design language, innovative touchscreen operating concept and a systematically electrified drive. The Audi A8 is also the first production automobile in the world to have been developed for highly automated driving. From 2018, Audi will gradually be taking piloted driving functions such as parking pilot, garage pilot and traffic jam pilot into production. 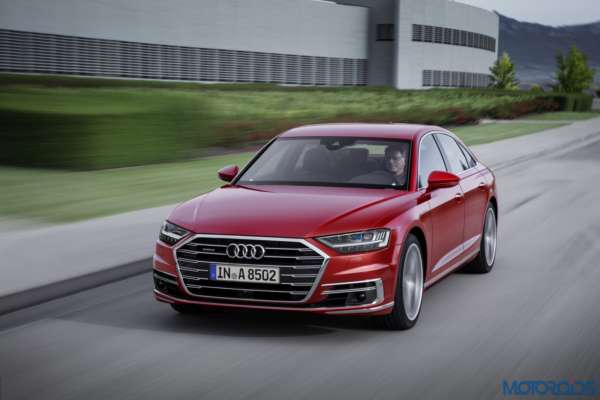 Visually, the Audi A8 signals the dawning of a new design era for the entire brand. Upfront is the wide, upright Singleframe grille and the fluid, muscular body which is aimed to symbolize sporty elegance, sophistication and progressive status. The luxury sedan is 5.17 meter (17.0 ft) long in the standard form while the A8 L sports a 13 centimeter (5.1 in) longer wheelbase. The flagship model proclaims its identity both day and night, drawing on both the HD Matrix LED headlights with Audi laser lighting, and the LED light strip combined with OLED technology rear lights.

You May Like – Spidey Arrives To The Red Carpet In The New Audi A8 At The World Premier Of Spider-Man: Homecoming 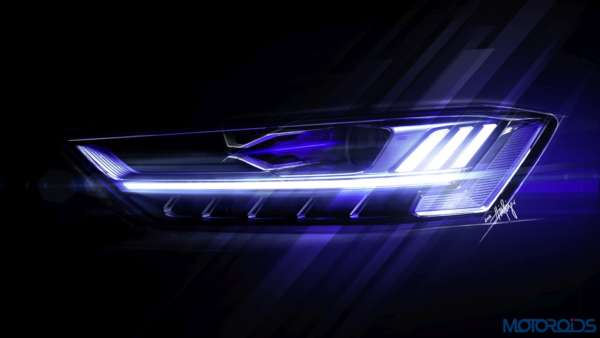 On the inside, compared to the predecessor model, it has grown substantially in length in both body versions. The range of equipment and materials is extensive, with every detail radiating superlative bespoke quality – from the perforation in the seat upholstery to the electrically opened and closed shutters on the air vents. 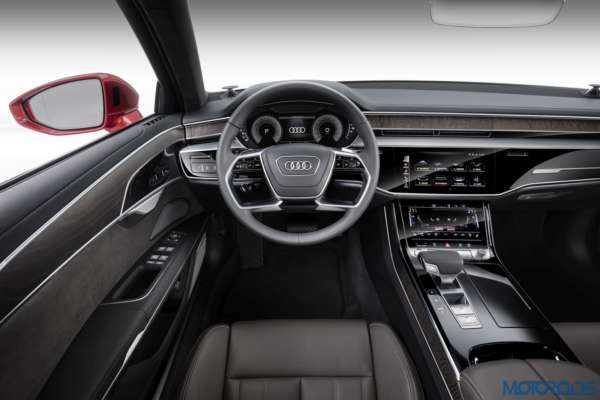 The optional relaxation seat on the rear right (rear left for right hand drive cars) in the A8 L comes with four different adjustment options and a footrest. In this seat, the passenger can warm and massage the soles of their feet on a unit with multiple settings incorporated into the back of the front-passenger seat. The rear passengers can also control an array of functions such as ambient lighting, the new HD Matrix reading lights and seat massage, plus make private phone calls, via a separate operating unit. The rear seat remote, with its OLED display as large as a smartphone, is a removable unit housed in the center armrest. 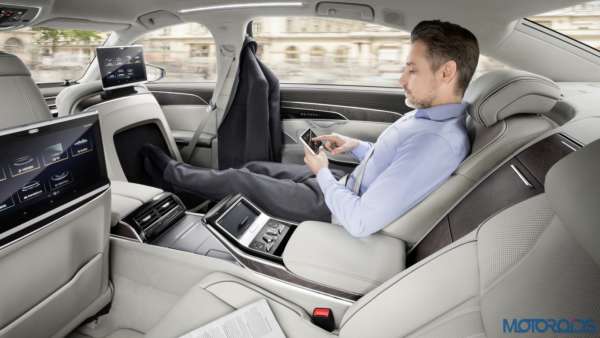 The new Audi A8 does away with the rotary pushbutton and touchpad of the predecessor model. The instrument panel is kept largely clear of buttons and switches. At its center is a 10.1-inch touchscreen display which, when off, blends almost invisibly into the gloss black surround. 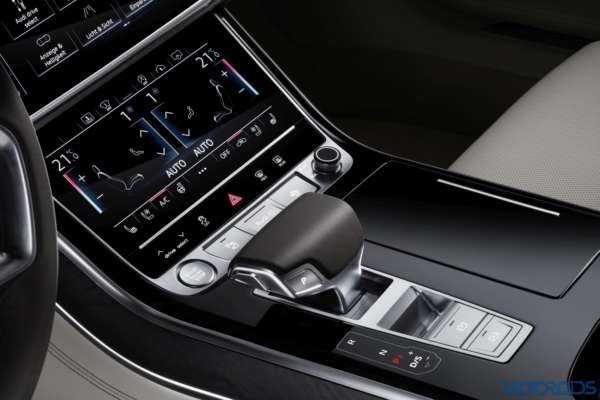 The user interface appears as soon as the car is opened. The driver controls the Infotainment system with fingertip control on the large display. They can use a second touchscreen display on the center tunnel console to access the air conditioning and comfort functions as well as make text inputs. The driver can activate an array of functions in the automobile using a new, natural form of voice control. Information on destinations and media is either available on board or is delivered from the cloud at LTE speed. 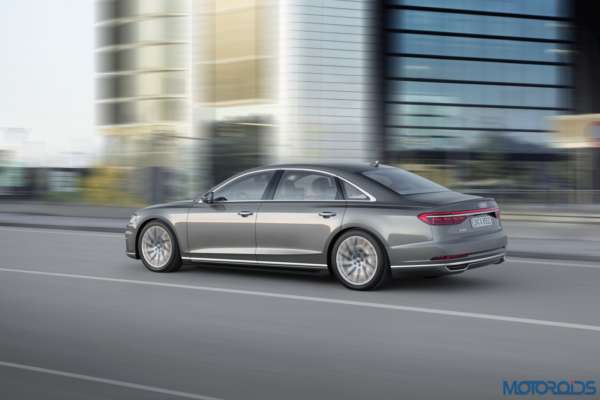 Apart from the new design and interiors, the new Audi A8 also features pilot-driving. The new A8 is the first production automobile to have been developed specially for highly automated driving. The Audi AI traffic jam pilot takes charge of driving in slow-moving traffic at up to 60 km/h (37.3 mph) on freeways and highways where a physical barrier separates the two carriageways. 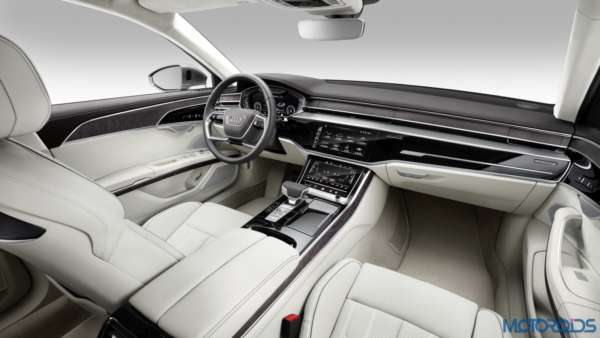 The traffic jam pilot manages starting, accelerating, steering and braking. The driver no longer needs to monitor the car permanently. As soon as the system reaches its limits, it calls on the driver to take back control of the task of driving. As well as the radar sensors, a front camera and the ultrasonic sensors, Audi is the first car manufacturer also to use a laser scanner. 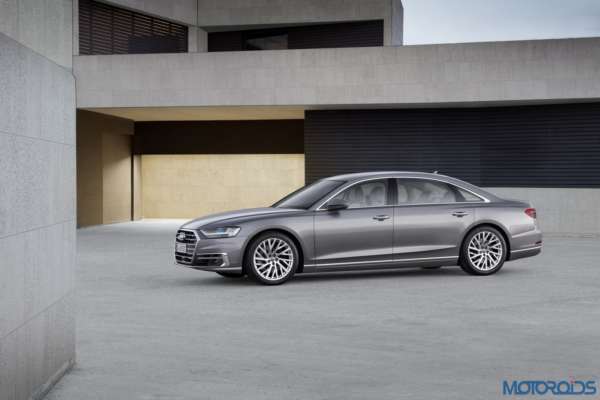 The Audi AI remote parking pilot and the Audi AI remote garage pilot autonomously steer the A8 into and out of a parking space or a garage, while the maneuver is monitored by the driver. The driver need not be sitting in the car. They start the appropriate system from their smartphone using the new myAudi app. To monitor the parking maneuver, they hold the Audi AI button pressed to watch a live display from the car’s 360 degree cameras on their device. 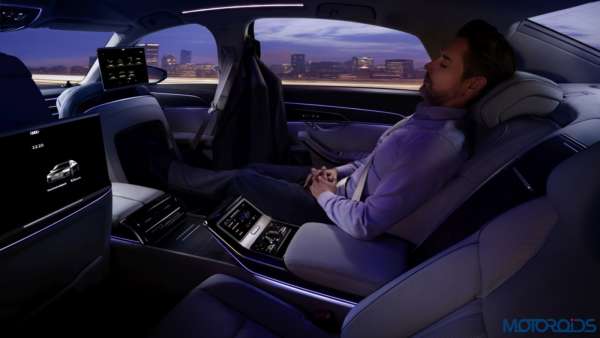 The suspension on the new A8 too revisits the limits. One such innovation is dynamic all-wheel steering, which combines direct, sporty steering with unshakable stability. The steering ratio for the front wheels varies as a function of speed; the rear wheels are turned in or against the direction of steering depending on the speed range. This actively distributes the drive torque between the rear wheels, complementing the quattro permanent all-wheel drive that is now standard in the new A8. 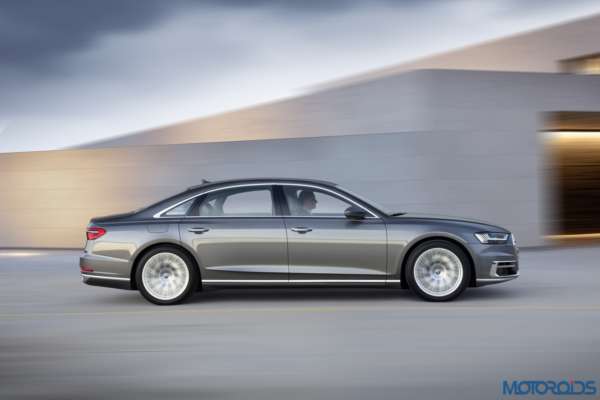 The new A8 also features Audi AI active suspension, a fully active suspension system. The system is capable of raising or lowering each wheel separately with electric actuators. In combination with pre sense 360-degree, the car is raised with lighting speed if there is an impending lateral collision, reducing the potential consequences of the accident for all occupants. This suspension system obtains the energy it requires from a 48-volt electrical system. 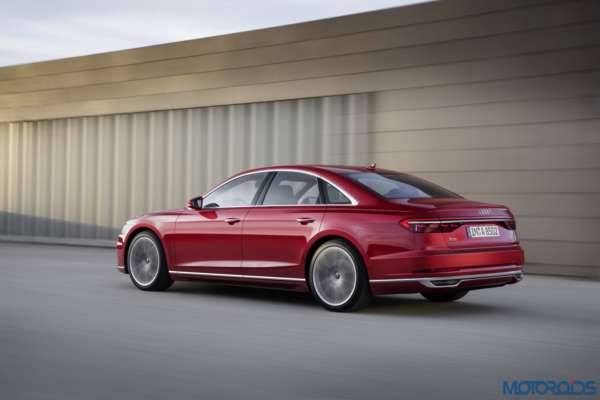 The new A8 starts out in the German market with two re-engineered V6 turbo engines: a 3.0 TDI and a 3.0 TFSI. The diesel develops 286 hp of power while the petrol version churns out 340 hp. Two eight-cylinder versions – a 4.0 TDI with 435 hp and a 4.0 TFSI with 460 hp – will follow slightly later. The exclusive top engine version is the W12 with a displacement of 6.0 liters. 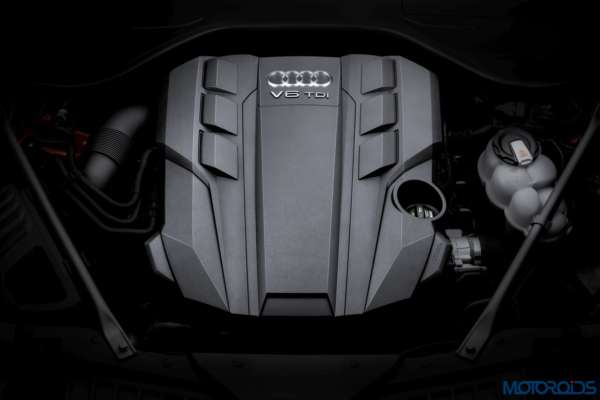 All five engines operate in conjunction with a belt alternator starter (BAS), which is the nerve center of the 48-volt electrical system. This mild hybrid electric vehicle (MHEV ) technology enables the car to coast with the engine switched off, and to restart smoothly. It also has an extended start/stop function and an energy recovery output of up to 12 kW. 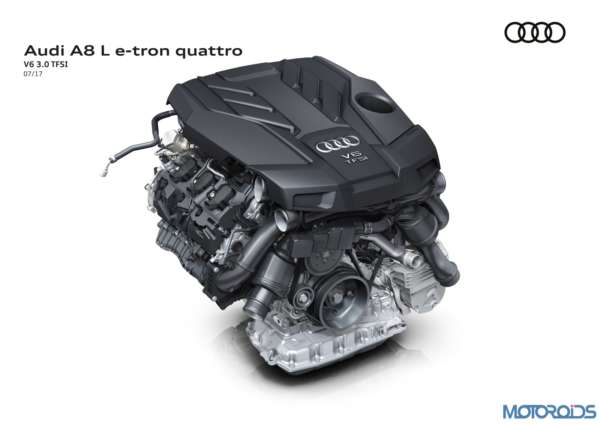 The A8 L e-tron quattro with its plug-in hybrid drive will follow at a later date. Its 3.0 TFSI and the powerful electric motor achieve 449 hp of system power and 700 Nm (516.3 lb-ft) of system torque. The lithium-ion battery stores enough power for about 50 kilometers (31.1 mi) of electric driving. 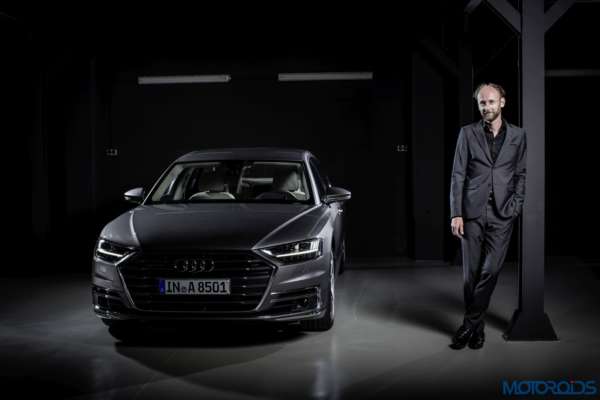