Not very long ago, patented images of the all-new Mitsubishi 2016 Pajero Sport had been revealed. This time around, a more realistic image of the upcoming SUV has surfaced via a computer rendering. The rendering clearly showcases the Japanese carmaker’s latest ‘Dynamic’ design language and similar to most carmakers, the new design language will eventually make it onto more Mitsubishi cars. 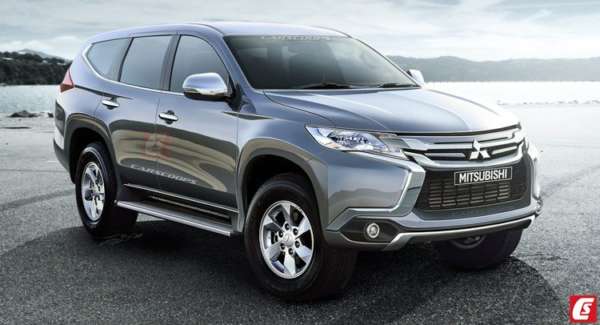 Up front, the 2016 Mitsubishi Pajero Sport wears a completely revised fascia, something the carmaker refers to as – “Dynamic Shield”. This design language has been previewed before on the company’s PHEV Concept, lending the new Pajero a contemporary yet muscular appeal. The front wears chrome garnishing and the grille extends right to the sleek headlamps; right below the thick grille is a large opening for the air dam and underneath that is a skid plate; flanking which on both the sides are rounded fog lamps.

Mitsubishi’s 2016 model of the Pajero Sport shares the basic design of its bonnet, front doors and windshield with the latest Triton pickup, and both the new models share a similar body-on-frame platform. The interior design of the all-new Pajero Sport shares certain resemblance to the new Triton, but it is likely that the Mitsubishi will make a few changes to the cabin of the 2016 Pajero Sport to set it apart from the Triton pickup. The boffins at Mitsubishi have also tweaked the SUV’s cabin, so now there will be more interior room for the occupants. The new model will be loaded with features such as automatic climate control, rain-sensing wipers and automatic headlights, electric push-button start, powered front seats, a new multifunction 3-spoke steering wheel, 6-inch colour touchscreen, reverse parking camera and a navigation system.

Powering the 2016 Pajero Sport will be Mitsubishi’s all-new MIVEC engine that displaces 2.4 litres. This 4-cylinder turbo diesel engine will produce 178bhp and 430 Nm of twist, and will be married to a new 6-speed manual or 5-speed automatic transmission. Depending on the market, Mitsubishi will offer the 2016 Pajero Sport in RWD and 4WD versions – the latter featuring the latest ‘Super Select 4WD II’ system. The 2016 Mitsubishi Pajero Sport is set for launch in Thailand towards the end of 2015, with an Indian launch expected to happen somewhere in late 2016 or early 2017. Do you like this all-new SUV by Mitsubishi? Let us know of your thoughts and opinions in the comments section below.