Some spy images of an upcoming dual sport bike were captured not too long back. Believed to be the UM DSR, this bike resembles the Romet 125 to the T. Confused? So were we. It is very likely that the two brands have partnered up to bring new products in the Indian market, where UM could use their motors to power Romet’s chassis. Called the UM DSR Adventure 200 ABS, the bike you see in these leaked images will be made available in 4 colour options – Olive Green, Midnight Black, Brick Red and Octane Blue. These leaked images also reveal the pricing of the bike which has been set at INR 1.39 Lakh, ex-showroom, Delhi. Powered by a 200 cc engine, this motorcycle will go against the Hero Xpulse 200. 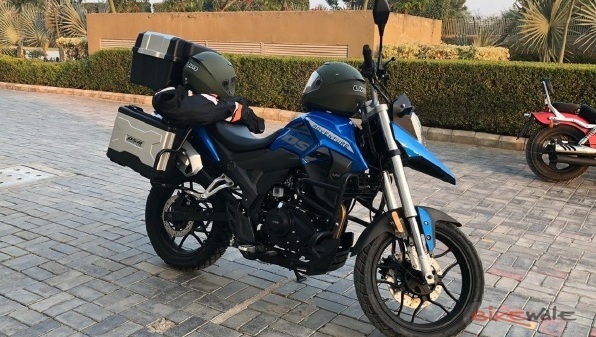 The 200 cc motor on this bike uses a carburettor to send the air-fuel mixture to the cylinder and can churn out 16 hp at 8,500 rpm and 16 Nm of torque at 6,500 rpm. The power would be sent to the rear wheel via a six-speed transmission. Tipping the scales at 148 kilograms(dry) this bike is light and most probably nimble enough to manoeuvre around. It gets a 290 mm disc up front with a single-channel ABS system and a disc is present at the rear. Both the wheels on the bike measure 17-inches in diameter and are wrapped in tubeless tyres. We believe those panniers could be optional, however, those USD front forks should be standard. 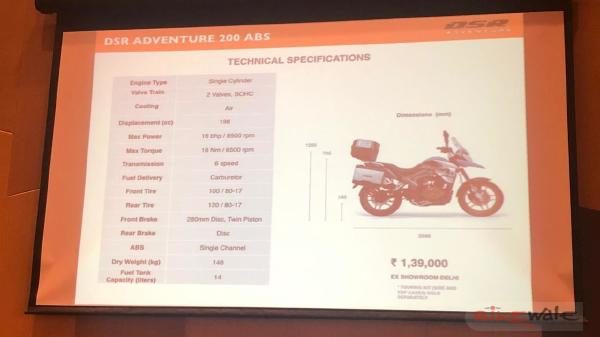 With the demand for smaller capacity adventure bikes on the rise, this seems to be the right time to launch such a product. Hero is yet to announce the pricing for the Xpulse 200, but it is rumoured to be near the INR 1 Lakh mark. Sharing space with the soon to be launched Xpulse 200, this UM will have its work cut out when it goes on sale officially. We’ll bring you more updates as and when they arrive. Stay tuned!