The much awaited 2020 Triumph Street Triple RS is almost here as it’s slated to launch in India on 25th March, 2020. This news is surely going to cheer the motorcyclists trapped in their homes because of the Coronavirus outbreak. 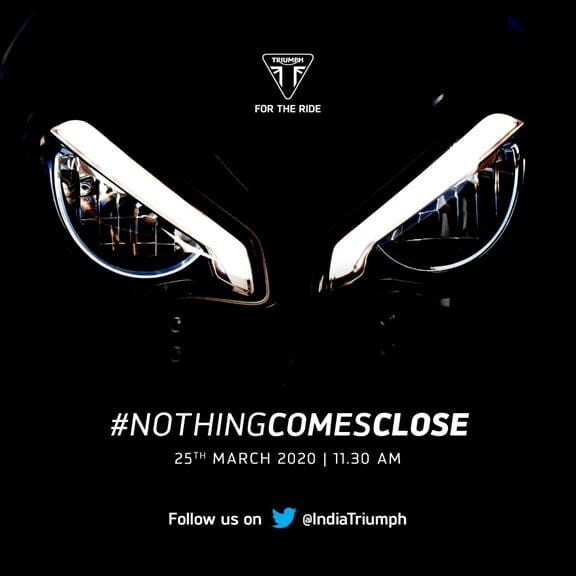 Triumph has teased the launch of the new Street Triple RS by dropping a video on the internet which features a deep growl from their widely acclaimed triple cylinder engine and a pair of sharp headlamps highlighted by LED DRLs. The Street Triple RS will continue to get powered by Moto2 derived engine but in a different state of tune. The new tweaked engine is expected to deliver more power and torque than before and Triumph claims that the rideability has improved as well.

The Street Triple RS has received some cosmetic upgrades too, in the form of newly designed sharper headlamps. The changes don’t end here as there’s also new bodywork, new graphics and to improve the overall aerodynamics, the 2020 Street Triple RS is going to get a new flyscreen too.

One of the key highlights of the Street Triple RS has always been its 765 cc triple cylinder engine which also does the job in the Moto2 machines. In the street legal version though, it comes with a different set of tune.  The new updated engine now makes 9 percent more power but the peak power output remains the same at 121 bhp at 11,750 rpm and 79 Nm of peak torque at 9,350 rpm. More power in the mid-range will improve the riding experience which was already good before. Street Triple RS is critically acclaimed for its day to day practicality and now with more power in the mid-range, it gets even more desirable. The throttle response is said to be better than before too.

Triumph is particularly famous for using top of the line components while developing their motorcycles and that doesn’t seem to change with the new 2020 Street Triple RS as well. It will continue to use the top spec M50 four-piston radial Monobloc front callipers so braking department is well sorted. It will also come with a quickshifter as standard while there will be driving modes on offer too which can be switched on fly.

The 2020 Street Triple RS will be available in two colour schemes, namely matte jet black with aluminium silver and yellow decals, and silver ice with diablo red and aluminium silver decals. The outgoing iteration of the Street Triple RS is priced at Rs 11.13 Lakh (ex-showroom, Delhi) and we can expect a hike in the price when the new model comes.