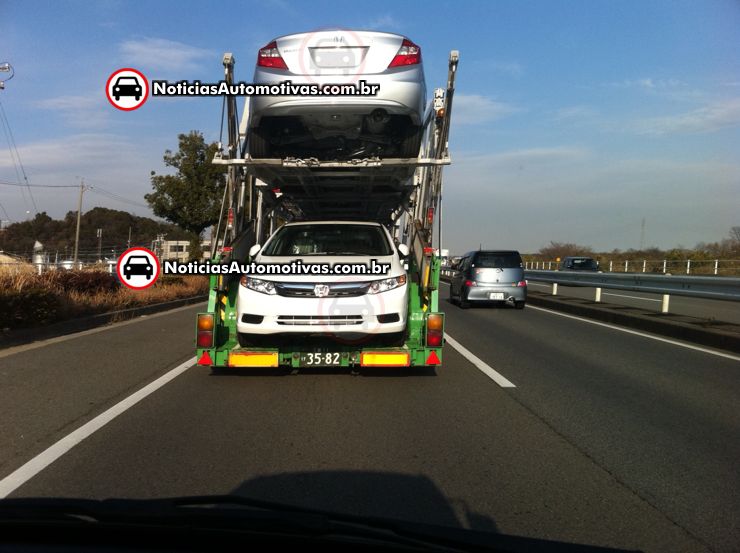 We were one of the first to report when Honda unveiled their 2012 Civic sedan concept and Civic Si Coupe. Although the 2012 Civic concept gave a good idea about the lines and shape of the next-generation Civic the design details were still not very clear from the pictures. Now Noticias Automotivas of Brazil have managed to click pictures of what looks like the production ready version of the next-generation 2012 Civic.

As was evident from the pictures of the Civic sedan concept, the 2012 version is not very different from its current iteration. Except for the more tapered headlamp, a slightly modified grille and a wee bit more aggressive bumper, 2012 Civic somehow doesn’t look like a new car. The rear end has gone under the scalpel of the cosmetic surgeon as well, but with those roundish tail-lamps now replaced with angular ones.

The interior of the car too has been spied before, and in its newest avatar the Civic will have an entirely new, driver-oriented dashboard. There is no word on the power-train either, and we honestly don’t expect anything to take us by surprise.

The new car, since it’s in production now, should be in India very soon. Honda needs some new products in its stagnant lineup to boost sales. We expect a Mid-2011 launch, and an unaltered price when compared with the current generation Civic.

The current Civic was lauded the world over for its radical styling. And it would be a shame if its successor doesn’t carry forward its predecessor’s tradition. Here’s the Image Gallery of the 2012 Civic spy pictures
[nggallery id=43]
Image Source : Noticias Automotivas