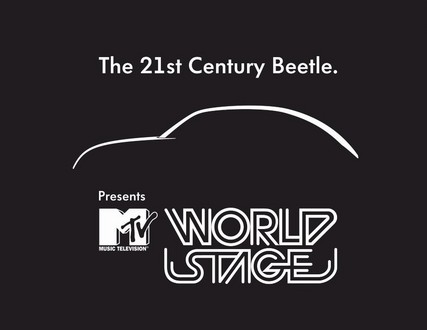 The Iconic design car the VW Beetle will be coming in its new avatar on April 18th at the Shanghai Motor Show. What is amazing is  the way it will be launched, it will be launched in three continents at the same time, followed by world stage events at New York and Berlin in collaboration with MTV.

The show at NY will have the Black Eyed Peas performing songs from their old as well as latest albums. Later on you can find these events broadcasted on MTV worldwide. The Berlin show will feature the famous Belgian duo 2manydjs.

There is no information given by VW on the new car, it’s all a surprise, but we have two spy snaps for you to see the car much before its launch. It looks similar to the old beetle that is on a protein diet. This is what VW had to say ‘The Beetle is an icon of the automotive world, just like MTV is an icon of the music world.  In the context of this marketing alliance, we are taking the new Volkswagen directly to our customers and fans of the Volkswagen brand – and we are doing it globally.  We are certain that the car’s one-of-a-kind styling combined with the latest technology will be very well received by customers,’ said Luca de Meo, Director of Marketing for the Volkswagen Group and for theVolkswagen Passenger Cars Brand.”

What do you think about the new Bettle?