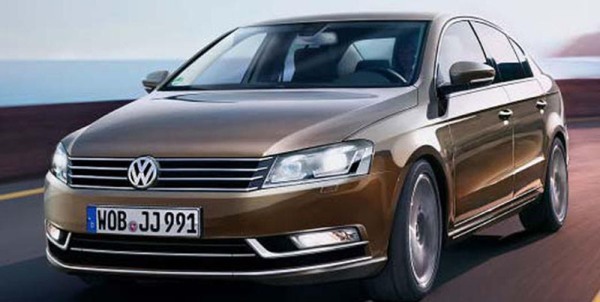 A Norwegian website dagbladet.no claims that they have managed to sget hold of some leaked images of the 2011 VW Passat.  If the newspaper is to be believed, the source of the photograph is VW, and the image is allegedly leaked by one of the VW dealers. We have our doubt on the claim though, as the picture looks more like a computer generated rendering than a real life photograph. Although the picture is very similar to the leaked pictures that once emerged on the German auto magazine AutoBild’s site, it doesn’t really seem to be the real deal.

Once glance at the car, and one can make out that the design has a strong relation with the Polo and the Vento. The image shows a new set of headlights, and chiseled body panels which make the new Passat look more angular and sculpted than its earlier iteration. Even the fog lamps, the grille and the lines on the side are totally different from the current generation car.
From the inside, the car is said to incorporate changes like a new instrument set, a new dash, better materials and a multi-function steering wheel. The final production version of the car will be revealed in the Paris Motors Show, where a slew of other interesting cars are waiting to make a show debut.
The 2011 Volkswagen Passat will first make an appearance in the showrooms in Europe, and will be sold in sedan and station wagon variants.
Engine options, when the car debuts in Europe will include two petrols and an array of diesels. The petrol engines will be a 2.0-litre 4-cylinder turbo and a new 300-horsepower 3.0-liter V6. A hybrid model has also been confirmed by VW.
The 2011 Volkswagen Passat will arrive in India in the first quarter of 2011 and will retail for a price of Rs 20Lakh
Images: Autobild and Dagladet.no