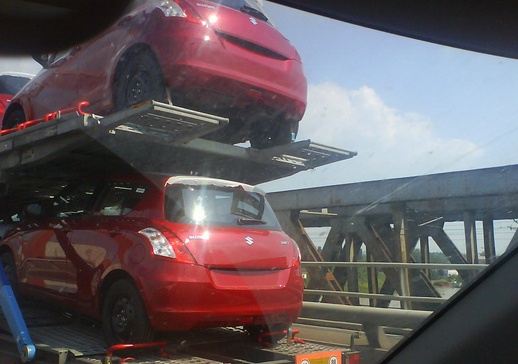 It’s turning out to be a ‘Swift’ Tuesday. A little while ago we showed you the 2011 Swift doing the rounds around the racetrack and showing its handling prowess. Now, a tolacar.hu, a Hungary based auto website had managed to click the totally undisguised pictures of the new car. This is the first time anyone has been able to get the pictures of the new car without any cladding. The pictures were taken when one of the eagle-eyed readers of the website shot some pictures of the cars while it was transported on a tractor trailer.

As most of us had anticipated, the new car isn’t very different from its current sibling. No undisguised shots from the front end are available yet, but from the rear, only a few subtle changes are visible. There is a recess at the point where the lower end of the rear door and the rear bumper meet. The tail-lamps too are slightly different in design with a bigger patch of clear-lens. More significant changed are expect at the front end of the car, but unfortunately no pictures are available from that angle yet. Expect some changed to the front headlamps, bumper and grille. The car looks slightly bigger than its current version and as we saw from the video, can be expected to be a better handler.
According to the Hungarian website, the car is slated to be officially unveiled on the 10th of June (yes, that’s just two days from today), but the pictures having been leaked already, we can expect some more action happening on the web before the actual launch.
According to the website, the new car will be shown in Esztergom, for which they already have the invitation. We are keeping an eye on the site now, and since it’s in Hungarian language, you know exactly where to come to on June 10th for all the details of brand new Swift.
Source : totalcar.hu