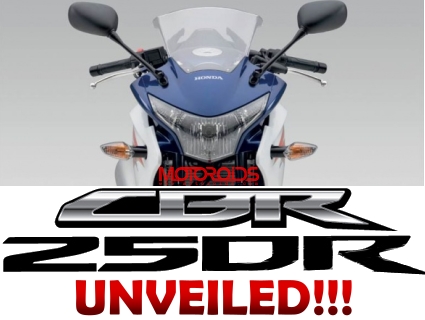 Honda Motorcycles has unveiled the 2011 CBR250R today in Thailand amongst much fanfare. As we told you yesterday, a bunch of Indian journalists were flown in to Thailand to get a foretaste of the motorcycle, clearly indicating that the CBR250R is on it way to India too. But there are no more speculations now, as the word is out from the horse’s mouth – Honda, in the Press Release issued today has confirmed that the 2011 CBR250R will indeed make its way to India in the spring of 2011 (April 2011). The folks at Thailand though, will get this bike in November itself. The bike has been developed by Honda Japan with significant involvement from Honda Motorcycles and Scooters India (HMSI) and Honda Thailand.

The bike will be powered by a 250cc single cylinder, liquid cooled four stroke four valve DOHC engine which churns out 26hp of max power at 8,500rpm and 23Nm of max torque at 7000rpm. Honda further states that the bike will source materials and components from strategic sources to keep the prices as low and competitive as possible. We hope with fingers crossed that by ‘competitive’, Honda is not implying a price tag close to that of the Kawasaki Ninja 250R.

The biggest highlight of the 2011 CBR250R comes is the Combined Anti-lock Braking System. The bike incorporates C-ABS as a bid to improve safety and is specifically designed to be cost effective at the same time. The Combined ABS makes vehicle movements more stable during braking by bringing together a Combined Brake System (CBS, a front- and rear-wheel interlocking braking system) and an Anti-lock Brake System (ABS, a braking system that prevents wheel lock during sudden braking or under unfavorable conditions). The CBR150R will be available in India in both C-ABS and non-C-ABS versions.

The Honda CBR250R, as the form appears, is more of a sport tourer than an outright track tool like the CBR150R launched last week or the Yamaha YZF-R15 sold in India. The CBR250R uses a light construction, diamond shaped, tubular frame that offers agile handling and steady maneuverability, while the areo-dynamic fairing components are designed for protection against wind. The steel frame will come with unadjustable conventional forks and a Pro- Link rear shock. Braking will be provided by a three- piston Nissin caliper. The 13 litre tank capacity will run for 346kms. That’s 26kms to a litre. Accessories includes a carbon look seat cowl, wheel rim stickers, tank pad, tail pack and a u-lock.

Technical Specifications of the 2011 Honda CBR250R:

Here’s what we posted during the launch: