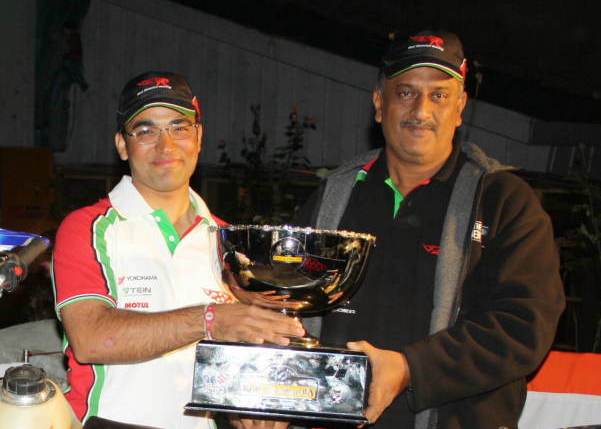 Ever since I was a kid I was fascinated with speed, I still remember twisting the throttle of my dad’s bike while he was shifting the gears as my legs hardly crossed the fuel tank Today to my surprise I am riding for the biggest racing dynasty in the country – Red Rooster Racing.

The whole year my day starts with a different approach. Sometimes 365 days are also not enough for the practice, to reach a level of performance I expect from myself.

This year in the 12th Raid de Himalaya we saw a drastic & record breaking increment in the number of participants, total 54 Bikers, 44 and four-wheelers. The best thing to see was that last year there were only 2 foreign bikes whereas this year 13 foreign bikes participated. All bikes were capable of producing more than 50 BHP.

The good highlights of this year raid for which I was happy:-

1.      I was trained by Red Rooster Racing in Bangalore.

2.      Red Rooster Racing provided me a new bike Yamaha WR 450 which is the most powerful bike I have come across producing 60 BHP.

6.      The runner-up of the world’s toughest race (The DAKAR) competed against me from team Austria.

The Bad highlights of this year raid for which I was not happy:-

This year Red Rooster Racing provided me a top of the class riding protective gear due to which I can say I am alive. For the 1st time in my life I was able to get my hands on the most powerful bike I can think of only because of Dinesh Sir ( Dinesh Reddy, MD, Red Rooster Racing ) . I can only admit that Dinesh sir is like a god to me as he was the only one to believe in me that I could perform on the bikes which can produce more than 60BHP. I have never seen such a humble & die-hard biker at heart person who truly believed in me and supported me to win one of the toughest competitions in the Raid de Himalaya.

This year it was my 8th time in Raid de Himalaya, in the last 7 events I was on podium in 6 events.

In the history of Raid de Himalaya this was the 1st time that anybody won the overall 1st prize in the extreme bikers category 4 times in a row. This year my lead over the KTM 450 in 2nd position was 1hr 49min 18 secs highest ever recorded.

This year for the 1st time biker made faster time than a 4×4 Gypsy and claimed the 1st flag-off  in the Raid de Himalaya. I was 9 min 47sec faster than the 4×4 Gypsy.

This was possible only by the help of Red Rooster Racing and the training they provide including all types of terrains such as sand, Rocky, slush, gravel, tarmac, Ice etc.

The 2 Issues I faced in Indian motorsports is :-

The total expenditure to race on a foreign bikes in an event like Raid de Himalaya goes to 13 lacs but the prize money is just Rs 50,000 which gets taxed and left is merely Rs30,000 which is peanuts for anybody.

The cost of owning a foreign bike is too high even for the rich. The only way out is possible with the support of Indian Govt. If the Govt. agrees to wave-off or reduce the import duty on the special purpose race machines only for sportsperson, than things may workout.