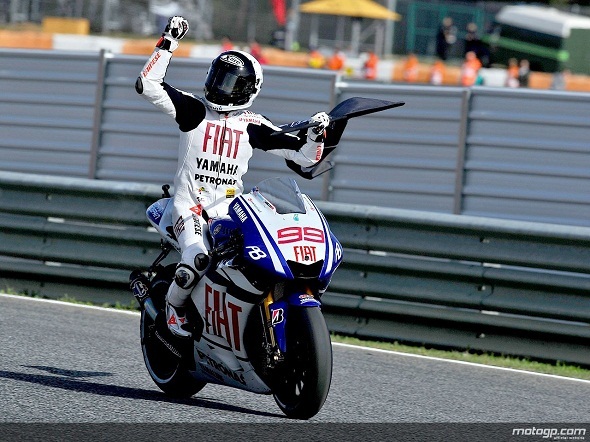 Fiat Yamaha’s Jorge Lorenzo won his third consecutive race in a spectacular way at Estoril circuit. This was the 8th win of the Spaniard in 2010 season. The race turned out to be a dramatic one as conditions were far from perfect right from the Friday practice sessions. Later on heavy rain led to the cancellation of the qualifying round. The grid slots had been decided according to the combined lap times on Friday. As usual Lorenzo was the fastest of all riders. Despite that the former World Champion Valentino Rossi was also looking strong on time sheets. He was fastest in morning warm up sessions.

Motorcycle racing is unpredictable as the race took place under dry conditions. Few riders were not happy about it as they were going into an unknown territory. They did not have any practice time in dry session the whole weekend. Jorge Lorenzo made a good start and led the race for a few laps. Due to these conditions the race was turning out to be an exciting one as the top 5 riders started battling out with each other for the top spots. Just after five laps Rossi was right on the rear wheel of Lorenzo and soon he made the move on 2010 World Champion to take the lead. At the back Andrea Dovisiozo and Marco Simoncelli were fighting it out hard for the final podium spot.

Dani Pedrosa who made a comeback after missing out three races due to fractured collarbone was running at 7th spot. Meanwhile Rossi was leading the race by 1.6 s now. On the other hand the Ducati rider Nicky Hayden was unable to keep the pace of Fiat Yamahas as he was dropping back. At one point of the race it appeared like Rossi could win the race but during halfway through the race Lorenzo suddenly upped his pace and started closing in on the Italian. He was constantly putting pressure on Rossi by setting a series of fastest laps. On Lap 17 of the 28-lap contest the Spaniard overtook his teammate, and gradually began separating himself from the action behind him.“On the warm-up lap I could see there were still a few wet parts and I knew that I was going to have to be careful at the beginning,” said Lorenzo. “I got a great start and was in the lead but eventually Valentino overtook me and then off he went. He had a better pace than me and I couldn’t go with him. As the track got drier I found my pace improving and then step-by-step I closed the gap and was able to get past him. At that point I felt really good and I am so happy to win for the third time here at Estoril.” With his most recent victory Lorenzo may still be able to manage the maximum amount of points earned during a single season, which is currently held by Rossi at 373.

Rossi finished more than eight seconds behind Lorenzo and 17 seconds ahead of Dovisiozo. He was happy after the race clinching yet another 2nd spot. “Like I said yesterday, a wet warm up and a dry race is a difficult one,” Rossi said. “I am happy about this weekend, we worked really well on the bike on the wet and this morning I was the fastest in the warm up, if it had been a wet race I could have been very competitive. For the dry we started blind so I had to try to take some risks at the beginning because the setting was ok, but it was not enough because when Jorge got into his rhythm he was faster than me, I had no way to fight with him. I tried to stay with him but he was too fast. Anyway second-place is positive for my championship because I am back in third-place and I’m not so far from Dani Pedrosa in second.”Towards the end of the race Dovisiozo and Marco Simoncelli were engaged in a serious battle for final third position but it was the Repsol Honda rider who edged out Honda Gresini rider coming through parabolica by just 0.059s. However Simoncelli was not disappointed as he scored his best result of the season. Once again Casey Stoner (Ducati Team) suffered the front end crash at turn 13 on lap five as he pushed hard while in third position, whilst Pramac Racing pair Aleix Espargaró and Carlos Checa both failed to finish too, the former crashing on lap one and the latter pitting in with an arm pump problem with 15 laps remaining. The World Superbike veteran who was replacing Mika Kallio couldn’t tame the bike as he wished. Ducati Team rider Nicky Hayden placed fifth after coming close to the podium, the American just 0.620s behind Simoncelli, whilst Randy de Puniet (LCR Honda) and Colin Edwards (Monster Yamaha Tech 3) completed the top seven, both within three seconds of Hayden. Dani Pedrosa (Repsol Honda) came in eighth, with Marco Melandri (San Carlo Honda Gresini) and Hector Barbera (Paginas Amarillas Aspar) inside the top ten. Alvaro Bautista (Rizla Suzuki), Hiroshi Aoyama (Interwetten Honda MotoGP) and Loris Capirossi (Rizla Suzuki) were the final three riders to finish the race. It was a very unfortunate day for Ben Spies as he was unable to take his starting grid position of fifth after crashing on the sighting lap and dislocating his left ankle. The American is hopeful of being fit to race in the final round of the season at Valencia next weekend.