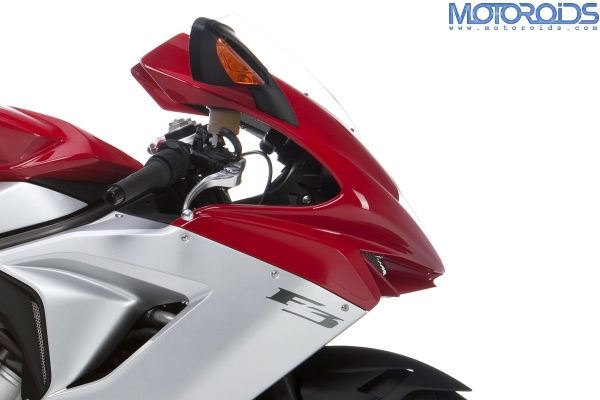 MV Agusta has taken the satin sheets off its F3 middleweight sports bike a day prior to its official debut at the 2010 EICMA. However, like the spy shots / teasers MV Agusta showed earlier, these photos too reveal only the side profile of the bike. To know how it would look in the rear view mirror of your favorite super sport bike, we’ll have to wait until tomorrow. The MV Agusta F3 still uses most of the lines that Massimo Tamburini penned for the original F4, but it still lacks the grace of the original just the way the new F4 does. At the same time, we must admit that the three pipes sticking out from the side have been wonderfully designed incorporated and shout out the MV Agusta design philosophy no matter which angle you look at it from. We’ll have to wait until tomorrow if the overall package looks good or not, boiling down solely to the head and taillights.

Like we mentioned earlier the MV Agusta F3 is powered by a 3-cylinder 600cc mill. Quite surprising, considering the FIM allows up to 675cc for a 3-cylinder motor for competitive purposes. Nevertheless, after buying MV Agusta back from Harley Davidson, Claudio Castiglioni is betting high on the F3 to turn fortunes in the company’s favor. The bike is expected to start at €9,000 (approx Rs. 5.4-lakh at current exchange rates, without duties) and extend all the way up to €11,000 for the top of the line version. The base model seems to incorporate the entry level monobloc calipers from Brembo and suspension from Sachs. The top of the line versions are expected to get better equipment, closer to a race spec machine.

The MV Agusta F3 is also expected to spawn a street bike that will play second fiddle to the MV Agusta Brutale. It could used a detuned version of the F3’s 3-cylinder motor while replicating the Brutale styling to an extent. Whether that too will be shown tomorrow at the EICMA, remains to be seen. Stay tuned to Motoroids as we try out best to bring you coverage of the most significant machines that will make their appearance at the 2010 EICMA.