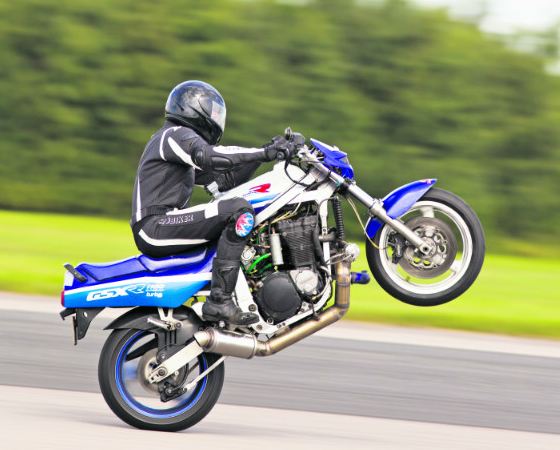 Now this is some news! A 22 year old Suzuki GSX-R1100 has won the World Wheelie Champinshiop, crossing the line at a blistering average speed of 169.4mph or 272.6km/h. the interesting thing is that the old bike was competing with modern equipment such as BMW S1000RR and the latest gen Suzukis.

The winning rider, Egbert Van Popta, originally from Germany but now in Holland took everyone by surprise with the victory. He entered the flying kilometer strip in fifth gear, thanks to the immense torque of this bike. Rivals on the other hand reared up their bikes in third or fourth gears, leading to lower average speeds as they had to change twice.

Another turbo R6 at the event clocked 180miles per hour in the top speed category. Amazing for a 600cc bike! The bike, according to the owser revs up to 16000rpm.
Source: MCN