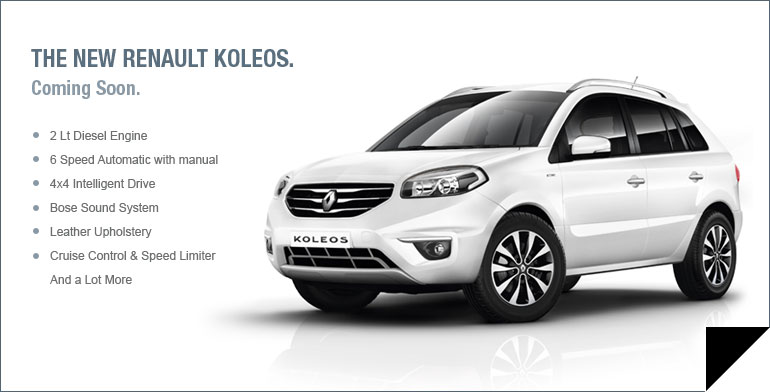 Renault India have introduced a small webpage for the Koleos crossover on its India site. The vehicle now makes it to the list of the products section on the company’s India site, along with the Fluence sedan. The webpage give the readers a glimpse of the features of the new crossover from French carmaker. A quick look at the features of the new car has really got us interested, most of all the inclusion of Bose audio system. If we are not mistaken, Koleos will be the first mainstream vehicle to feature to high end audio brand.

Other features highlighted include a six speed auto transmission, leather upholstery, 4×4, leather upholstery, Cruise Control and a 2.0-liter diesel engine. Those features really sound mouth watering, now all Renault needs to do is price that machine reasonably when it makes its India debut sometime late in September 2011

The Koleos will be powered by a 2.0-litre, 150bhp / 340Nm all-aluminum common-rail diesel engine with variable valve timing. This is the same engine that powers sister company Nissan’s X-Trail SUV as well. A 175 bhp version of the engine with 360 Nm of peak torque is also available internationally.

You click here to see the spy pictures of the Koleos SUV published on Motoroids earlier. Here’s an image gallery of the latest version of the vehicle.