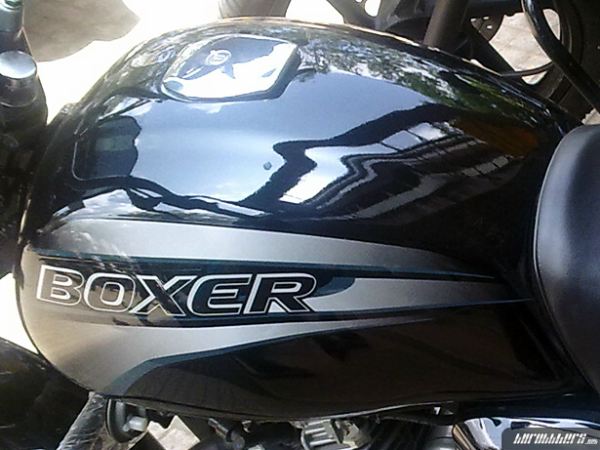 Bajaj have very softly launched their new Boxer BM150 ‘Bharat Bike’. For some strange reason, Bajaj Auto have kept the new bike away from the media’s eyes. We have been in constant touch with the good blokes at Bajaj, who have confirmed that the bike is now available in the market, and have also confirmed that no media events were carried out for the launch of the bike. We have been awaiting the official specs and images of the bike too, but seems like it’s going to take some time. Unofficial sources quote the price of the Boxer BM150 at Rs 43,000 ex-showroom Pune.

Bajaj is targeting the rual market with the new Boxer BM150 Bharat Bike. Designed and developed with load bearing capacity, low end torque, comfy ergonomics and plenty of bars to fasten luggage as its objectives, the new Boxer try to be the proverbial ‘work horse’ for the rural dwellers.

Featuring a 150cc single cylinder air cooled engine, which is a derivative of the Discover 150, tuned for lower end torque and fuel efficiency, the BM150 has several features to tackle the rigors of rural India. The bike features a single downtube chassis with a rectangular tube swing-arm. A more rugged form of twin coil spring suspension, what Bajaj prefers calling SnS suspension can be seen doing duty at the rear-end. A sizeable chrome plated steel platform for fastening luggage and other items such as milk containers has also been provided as a standard fitment. By the look of it, the BM150 Bharat Bike is trying to fill into the vacant shoes of the Rajdoot and Yezdi which used to be the hot fovourites among milkmen and farmers.

The front end features a round head-lamp with a huge wind defector which looks ungainly. However it should do a decent task of wind buffeting for rural riders who usually don’t prefer wearing helmets. Suspension duties at the front are taken care of by a twin telescopic fork setup. Spoke wheels with drum brakes and ribbed tyres complete the front look. Not a very contemporary set-up visually, but it pays to keep things simple for the rough Indian ruralscape. The tail-lamp and blinkers too are minimalistic in design and are reminiscent of the bikes of yore. Instrument cluster is simple too with a bare-basic speedo, odo, fuel gauge and turn signal combo.

As we mentioned earlier, the official specs and details on the bike are not out yet. However, e should have access to the official images, specs and more details on the bike very soon. Stay tuned as we get more dope on this rural workhorse out. Do let us know you opinion on whether this bike will meet its ambitions in the rural market. Does it look like the right product to meet a demand?