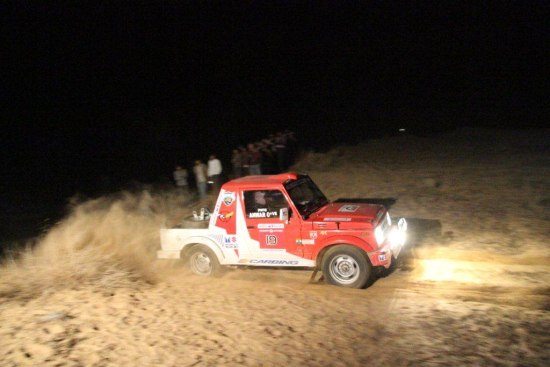 The rally completed its second leg on entering Jaisalmer at 18:00 hrs yesterday. The participants covered a total distance of 448 kms in the second leg. The rally passed through towns such as Jamsar, Siwani, Rajasar, Pilap, Bajju, Girandi and finally, Pabusar.

This year, the rally has a total of ten women participants. Last year’s champion Suresh Rana from Team Maruti emerged victorious in the first leg of the rally followed by Lohit Urs and Sunny Sidhu from Team Mahindra in the second and third place respectively. Raj Singh Rathore of Team Polaris is currently leading the Motoquad category.

The rally will cover a total distance of 2200 kms and will culminate at Jaipur on 23rd Feb 2013. The latest edition of the rally has 5 competitive legs out of which two are night stages. The Desert Storm has been divided into four categories- Xtreme, Motosquad, Ndure and Xplore.