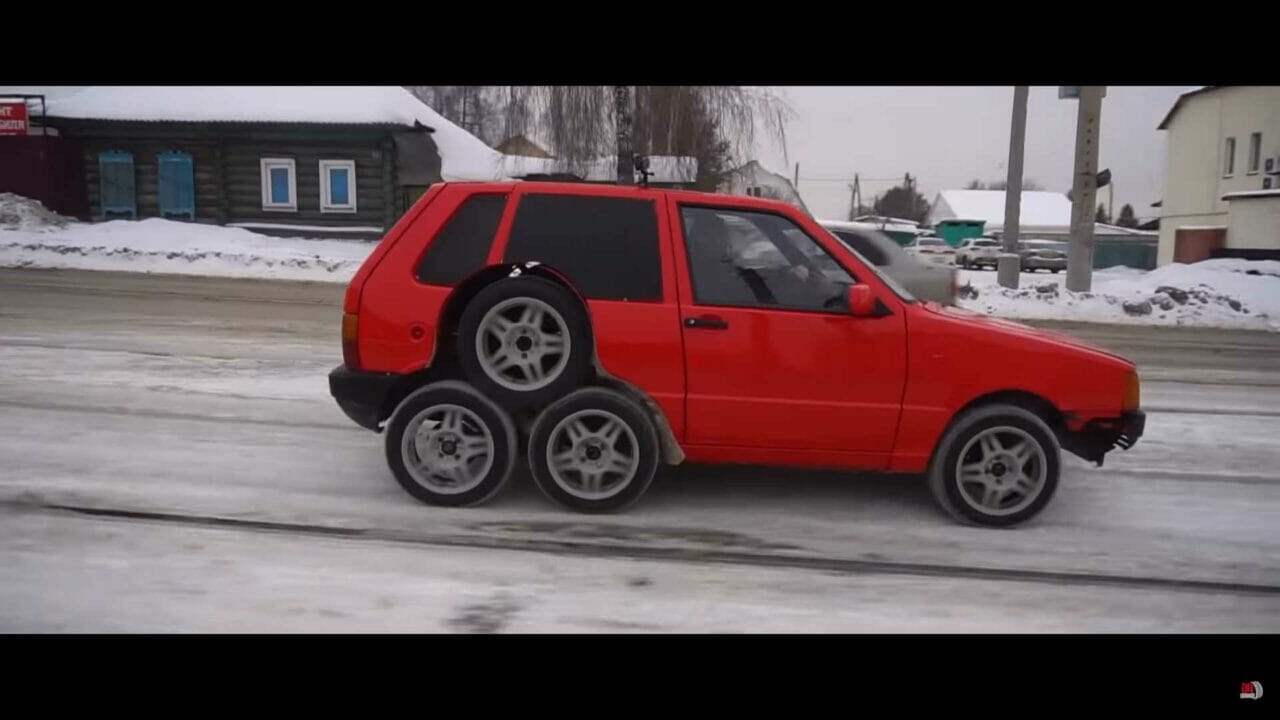 We doubt the current generation of our readers might have seen a Fiat Uno through their eyes. However, back in the days it was quite a popular hatchback worldwide and even in India. Fiat has always been known for creating fun small cars and they have been good at it.

Although they don’t retail any cars in India under their own name anymore, they still manufacture cars under the Fiat Chrysler Automobile (FCA)’s brand Jeep and continue to supply their powerful engines to other makers as well. However, here is a case where a Fiat Uno has been transformed into an eight-wheeled car and it looks quite peculiar. 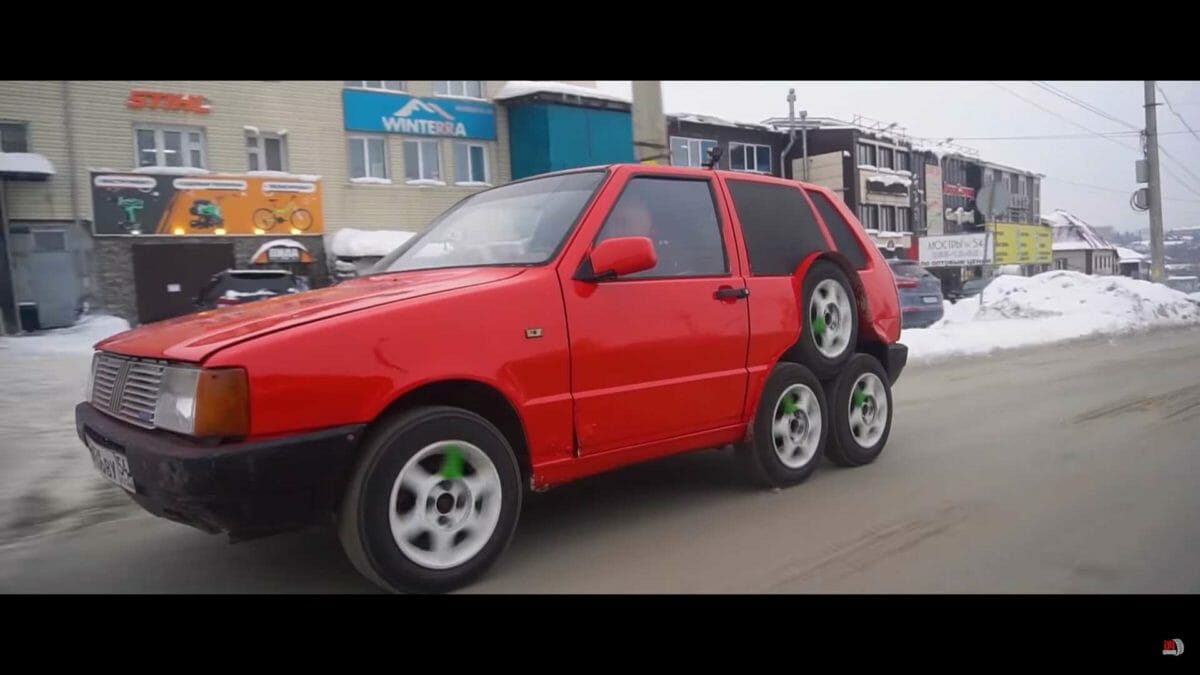 Inspired by an image sent in by a fan, Russian YouTube channel Garage54 decided it needed to give a Fiat Uno eight wheels. The channel is known for posting works that are more outlandish in nature. The video showcases the wild imagination of the creators and how they implemented it into action.

How Did The Makers Manage To Create This>

The creators have taken what was once a stock Fiat Uno 70-S – a popular hatchback in Eastern Europe and other countries – and replaced its single rear axle with a set of three axles, giving the car a total of eight wheels and tires. It required some substantial cutting, welding, and reinforcing to squeeze in the extra wheels, which sit above and to the rear of the stock back axle.

To achieve this, large chunks of the Uno’s body and floor pan were cut out to make space for the additional axle, the frame for the high-mounted hubs, and the quartet of new wheels. The funny thing, though, is that no power is being sent to any of the three rear axles and it is still essentially a front-wheel-drive car. Even the engine used is the stock engine used in Fiat Uno thus it has to carry all that extra load of the additional axles and wheels with no extra output.

Also READ: This Maruti 800 Is A True Off-Road Monster

The drive experienced was said to be less than comfortable due to many reasons. All those extra wheels appear to do nothing to improve the car’s handling. In fact, one can hear the engine and front wheels working extra hard to move all that weight and dealing with the added contact patch area from the extra tires. The petrol mill is barely able to move the vehicle and it certainly doesn’t transport anything save for mass quantities of snow since the uppermost wheels actually spin inside the interior. 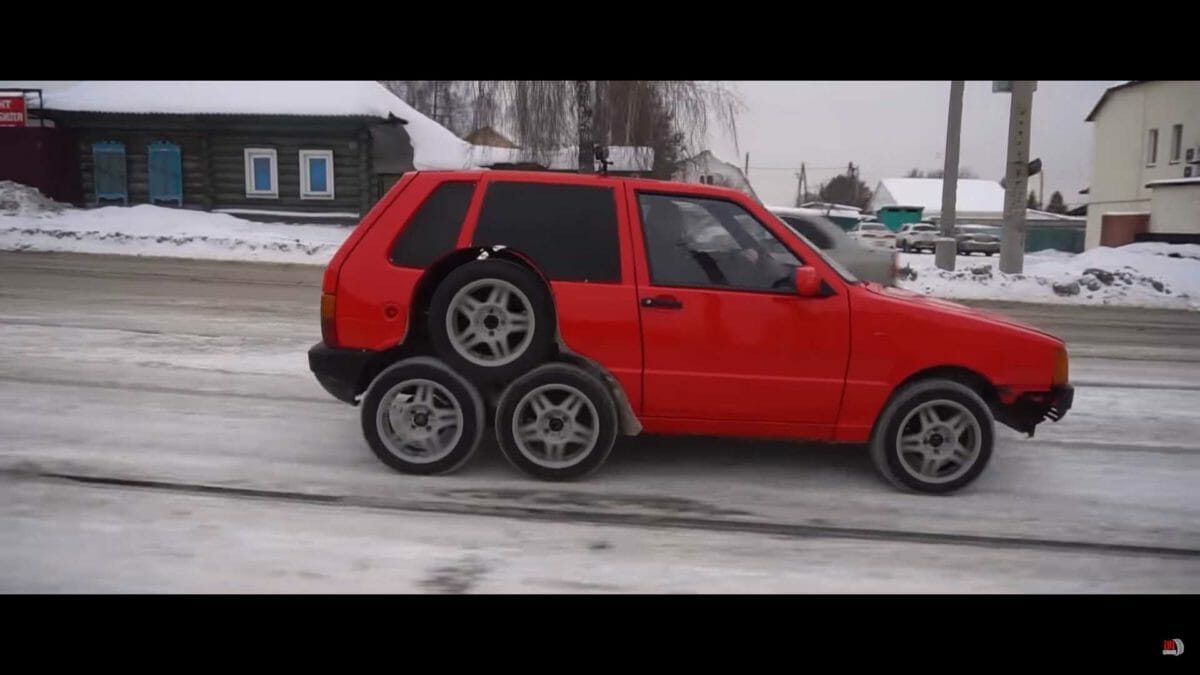 This design flaw was, however, rectified shortly after the first test drive with some makeshift splash guards, but still, it does look a bit drafty for passengers. For reasons unknown, the eight-wheeler also gets a bright red paint job and you know what? With white wheels spinning themselves like crazy, it actually doesn’t look that bad. Aside from being open to the elements, only two of those eight wheels enjoy the benefit of functional suspension. Even on smooth ground, the rear section of that Fiat bounces more than a tennis ball. 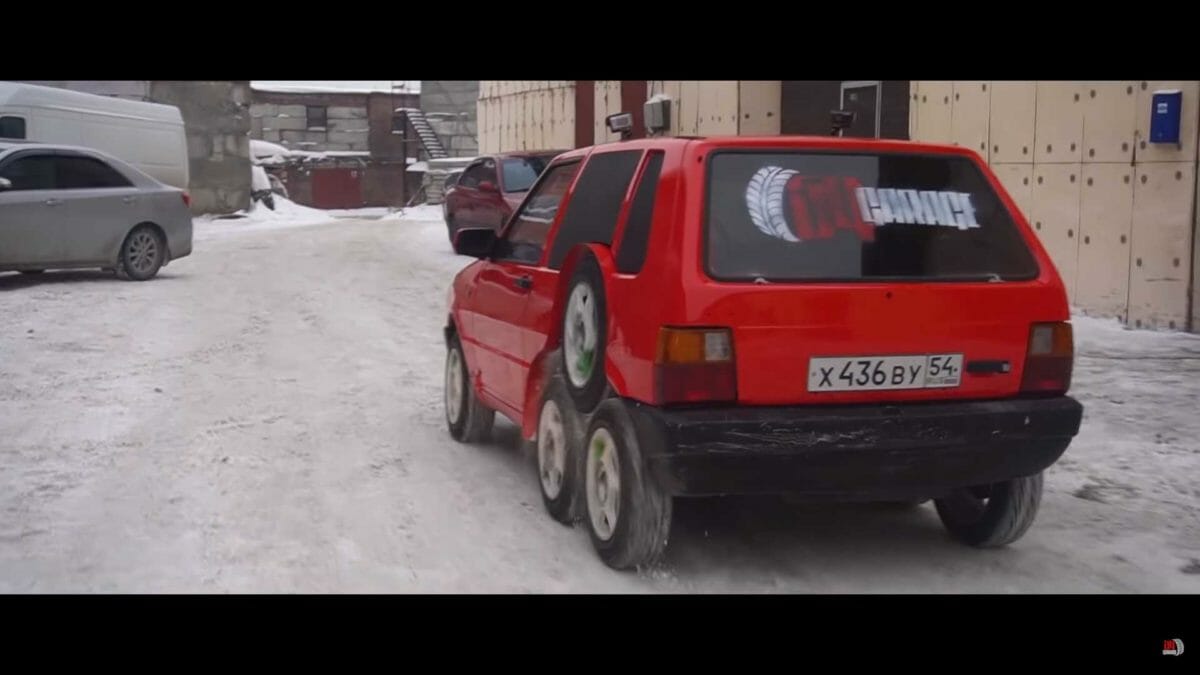 It, however, manages to function more or less as it should, but it is certainly able to garner all the attention. It’s not remotely practical, and with the Fiat being front-wheel drive there’s absolutely no traction benefit to be had. All in all, it is an innovative attempt at something very unusual yet not very useful.