Home Lists The Indian Police Force And Their Rides

For a long time after India’s independence, the police forces in the country had old school jeeps as their official rides. The old Jeep Willys once had a sure guest appearance in every other Hindi film. However, that is not the case anymore as police forces across the nation now have new and modern vehicles in their fleet.

The police have a tough job of protecting the people and their constituencies from harm. They need cars that can do the job correctly and quickly. In this article, we present a list of cars and SUVs which are currently commissioned in the various state police forces across the country. 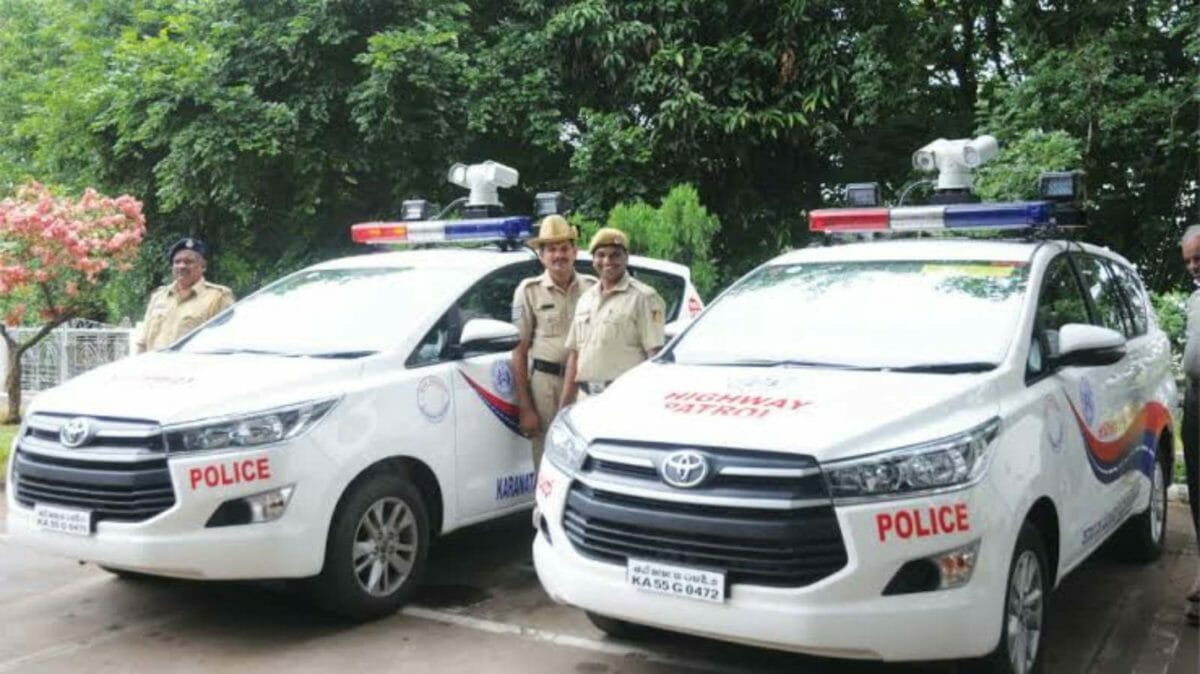 Toyota Innova is inarguably the most popular MPVs in India. It is also one of the most widely used cars by police forces across India. The Innova’s reliability combined with the amount of comfort and ability to carry 7 passengers with ease has made it one of the most common cars used by the cops in India, who can be seen inside the MPV for most of their daily patrol schedule. 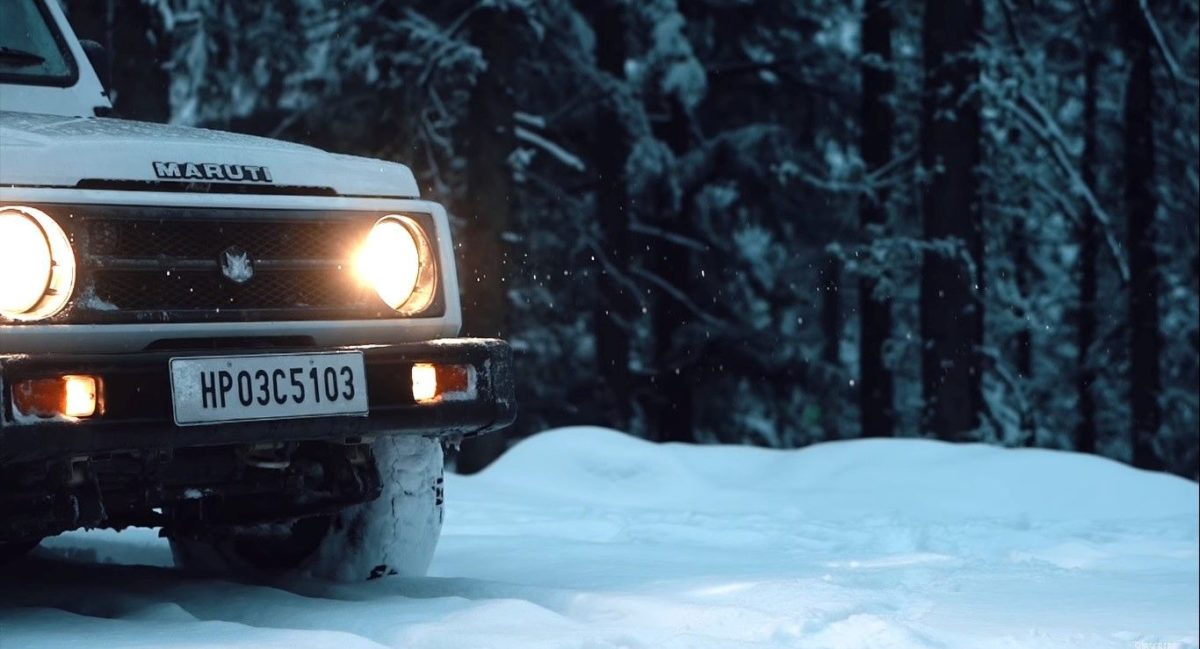 Maruti Gypsy has remained a favourite of the armed forces for decades. Maruti Suzuki Gypsy is a no-frills offroader. Its simple mechanics means that it’s super reliable and if something does go wrong, it can be repaired by any roadside mechanic. Its go-anywhere attitude combined with its reliability made it extremely popular among our nation’s cops. It is being replaced in quite a few police forces across the nation but it is still a very popular cop car in India. 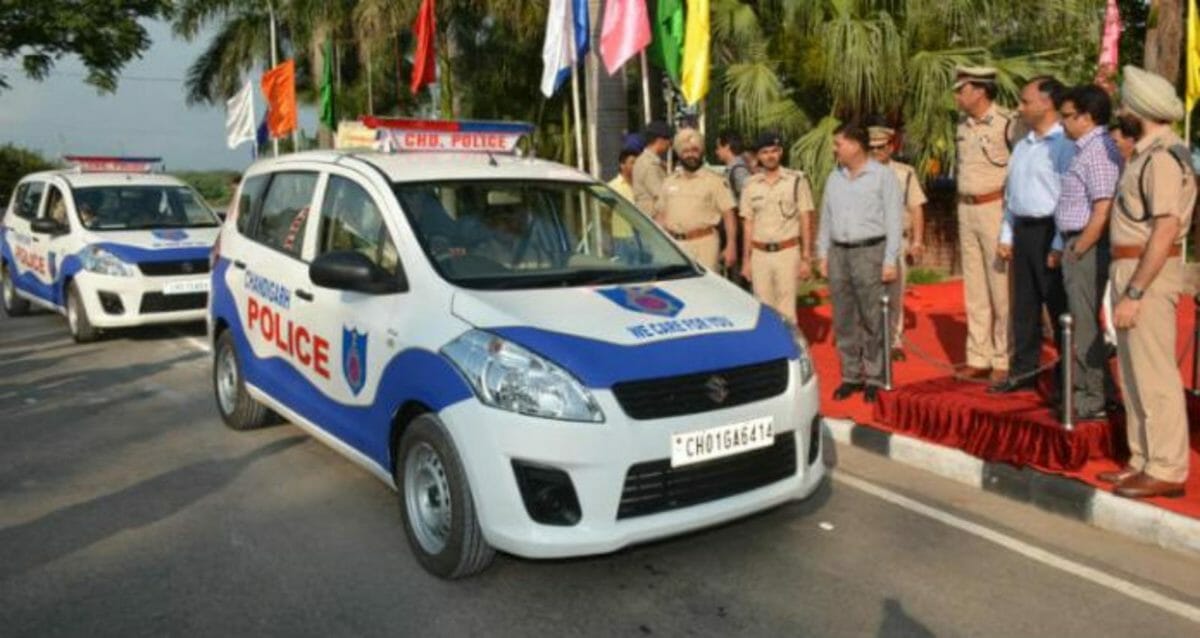 The Ertiga is the second most popular MPV after the Innova Crysta in India.  Even though it is smaller than the Toyota MP, the Ertiga offers good interior space and can carry up to 7 officers. Being a Maruti Suzuki, it has excellent service network and spare part availability. This ensures that these police vehicles don’t spend time idling in downtime. It’s less expensive than the Toyota Innova and also cheaper to run in the long run. It’s saving the state a lot of tax money without losing out on utility. 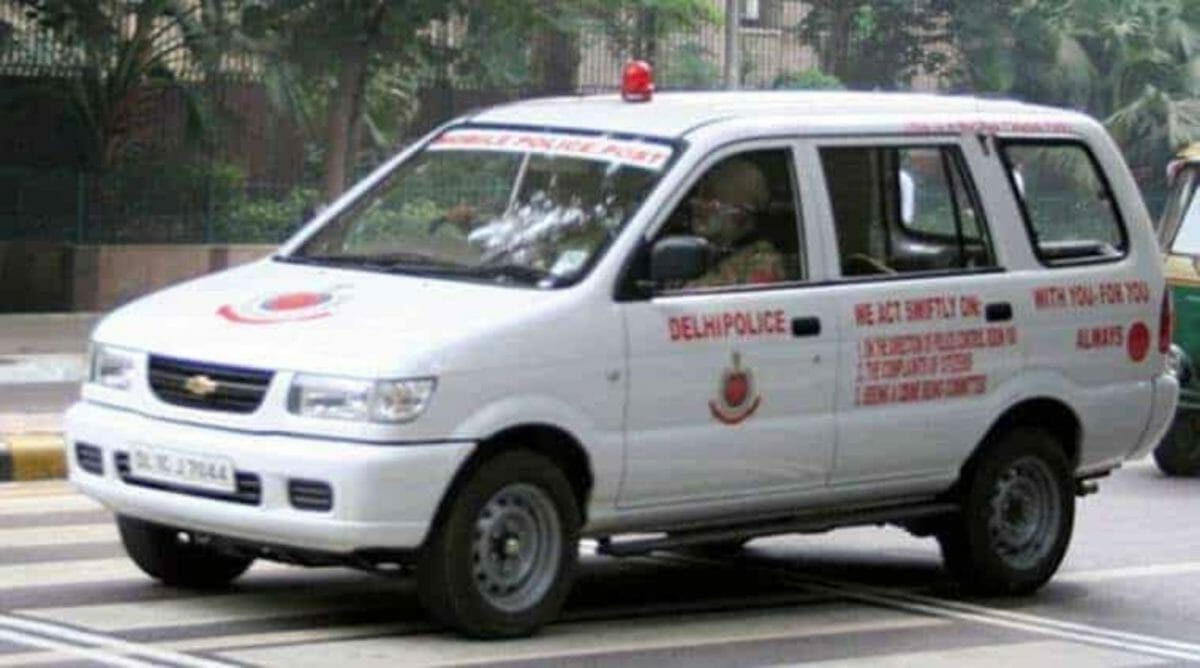 Now, Tavera has not been in sale for a long time ever since General Motors stopped its operations in India. However, a few can be spotted at some police force convoys. While the Tavera was touted to be a slightly more premium offering in comparison to other UVs like the Bolero, the lower end versions found their use as police vehicles. A lot of space inside and improved on-road dynamics made the Tavera a good choice before the police got MPVs as their urban patrol vehicles. 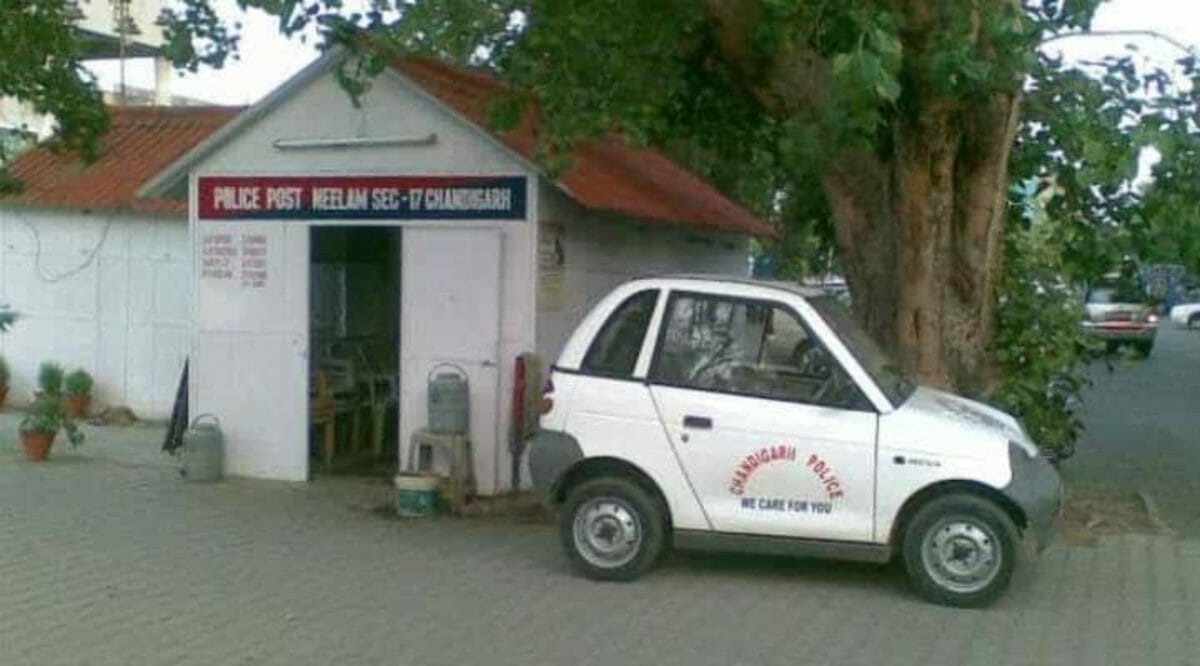 The first-generation Reva was launched in 2001 when electric cars were a novelty. Although it still is to some extent. Add its super small size to the mix and you got yourself a very radical-looking vehicle. It had a top speed of 60 kph and a battery range of 50 km. Chandigarh police department found a liking to this vehicle and purchased three Reva in 2006. These cars are stationed in sector-17, sector-34 and near Sukhna lake for patrolling duties. However, these were in news soon after for costing too much in repairs and upkeep. The Brand Reva is not owned by Mahindra and the latest model Reva e20 is significantly improved over the first-gen Reva. 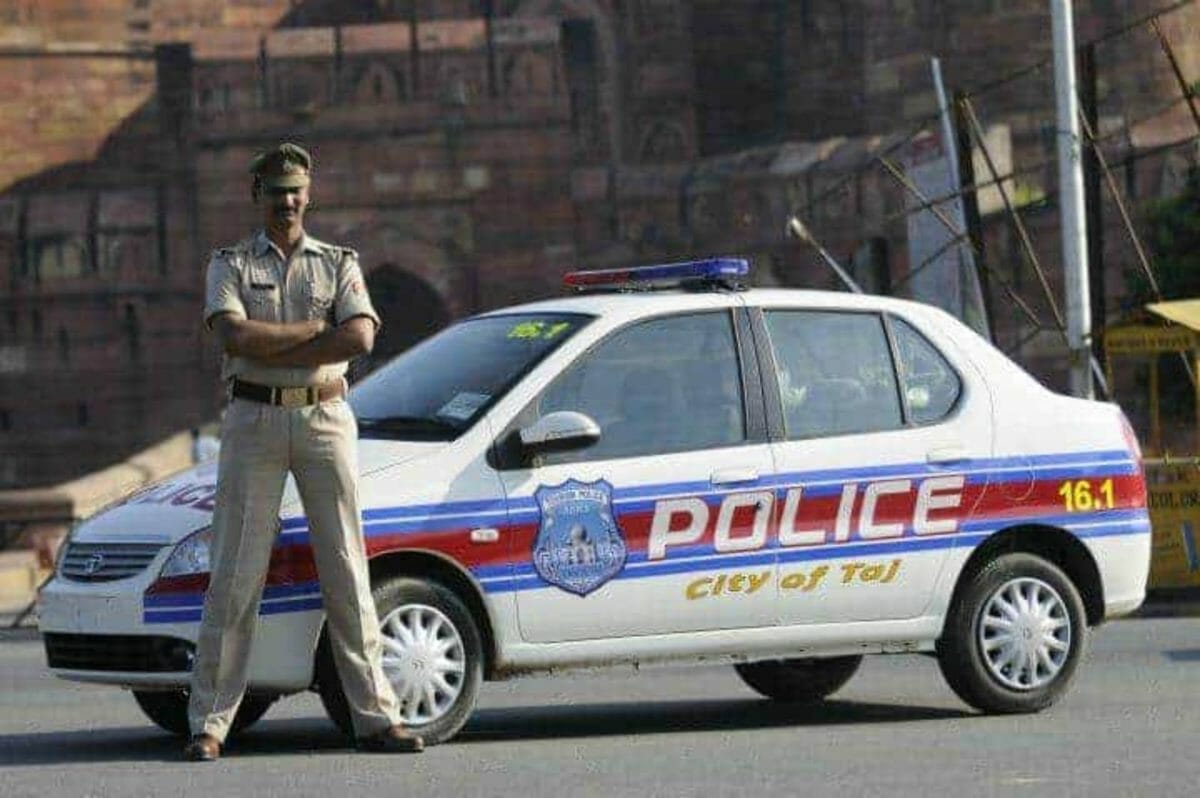 Tata Indigo disrupted the affordable sedan market when it was introduced. The success of this compact sedan created a new segment in India and cars like Maruti Suzuki Dzire and Hyundai Xcent followed suit. The car offered a whole load of space on the inside and a comfortable ride. It is used by the Kolkata and Agra Police Forces. 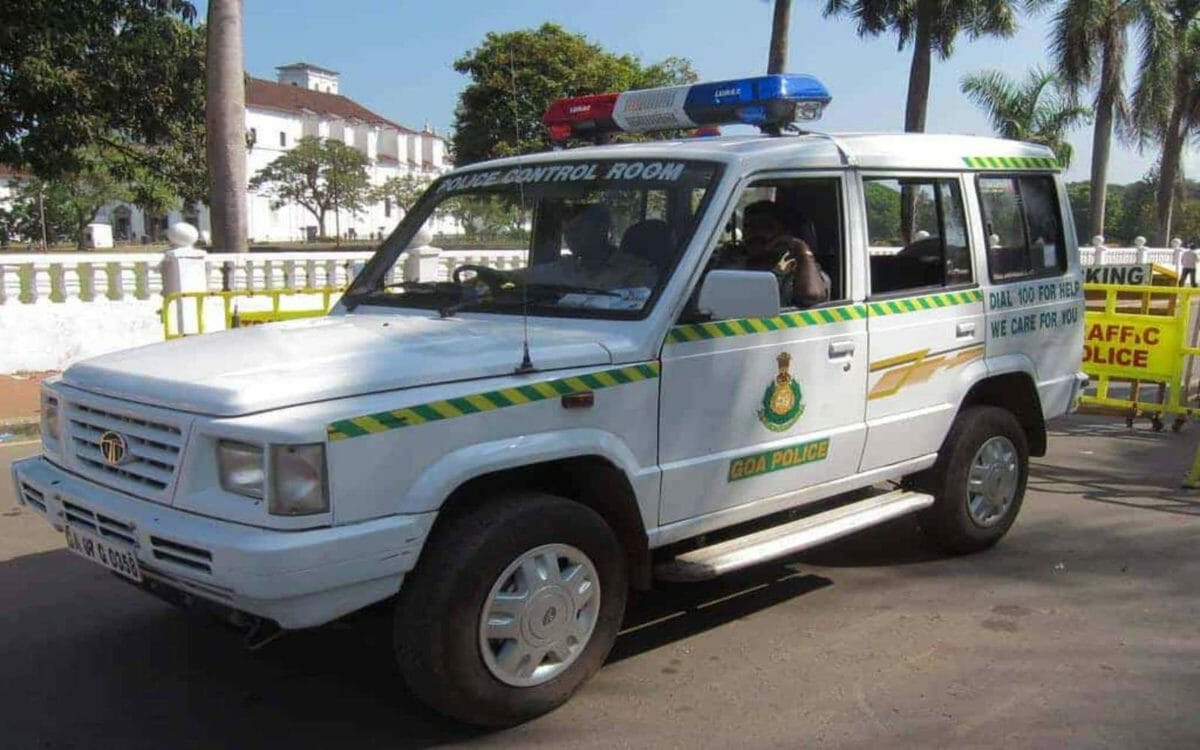 This is an iconic car in many ways. It was the first affordable SUV in India and made its way to many people’s hearts straight away. Its easy maintenance and performance in all terrains made it so popular in commercial markets that almost all state police forces at a time had the Sumo in their armoury. While the Sumo has been discontinued in India since 2017, some units of the last generation Sumo Gold can still be seen in Maharashtra and Goa police forces. It gets a more powerful engine (3-litre unit making about 85 PS and 250 Nm). It has a better interior, but the same ability to travel fully laden. The old-school silhouette goes great and projects a strong look that a police vehicle must have. 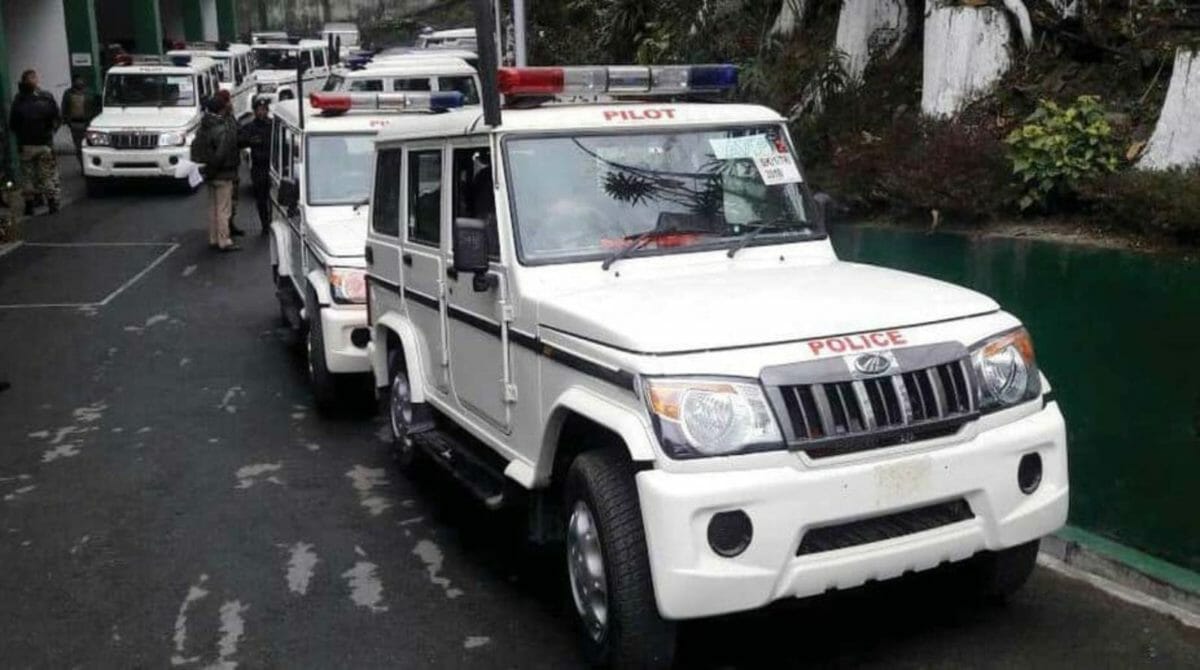 Mahindra Bolero is the most popular utility vehicles in India. It’s SUV like butch looks and ease of maintenance has made it quite popular and aspirational in Tier-2 and Tier-3 cities of India. It can handle bad roads easily, has the ability to handle and load goons at the back. It is drivable on the road and off-road as well. The Bolero is used by multiple police forces across the country and its longevity and ease of maintenance have made it a favourite among our Khaki wearing police officers. 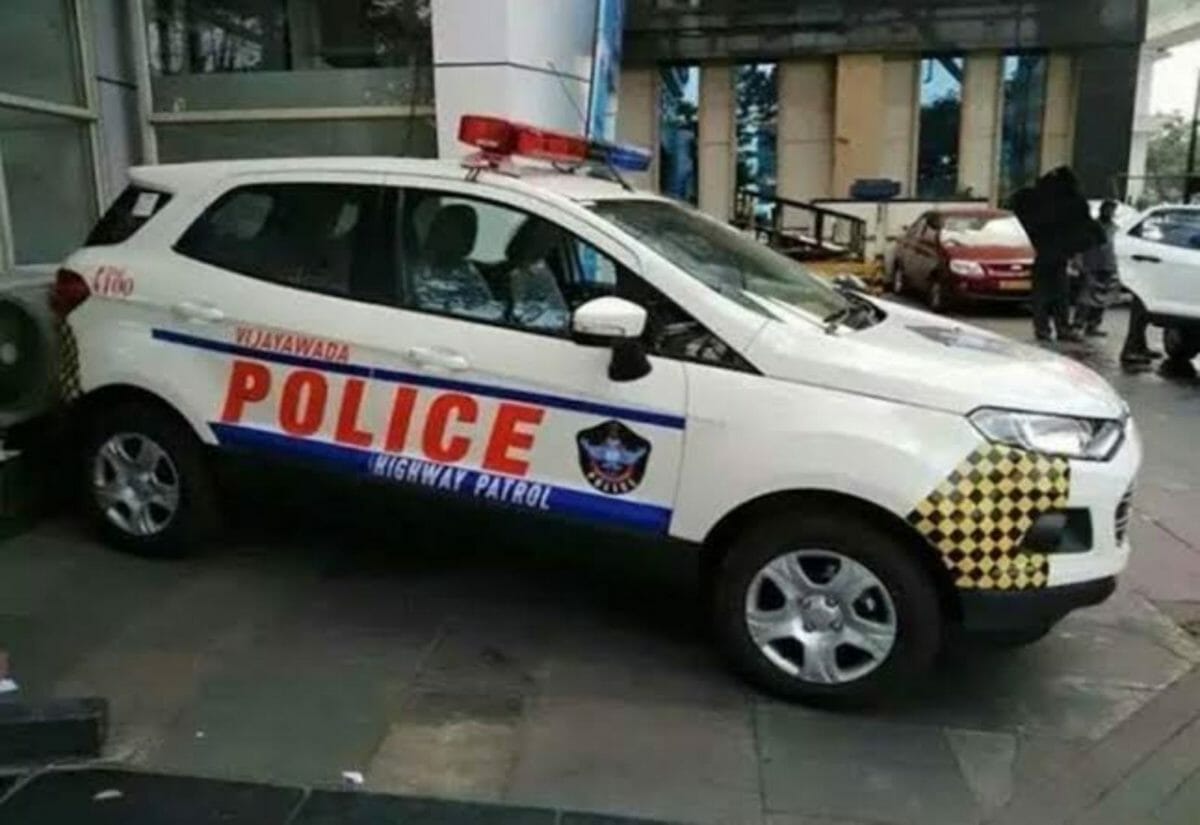 Surprised to see a Ford in this list? That’s because Ford Ecosport is quite a capable car to ignore. The compact SUV segment in India is growing rapidly and Ecosport has a major role to play in that. The compact SUV is a great highway patrolling vehicle. Powerful and decent to drive, the EcoSport can take on bad roads, long highways with sweeping bends, and even city roads. 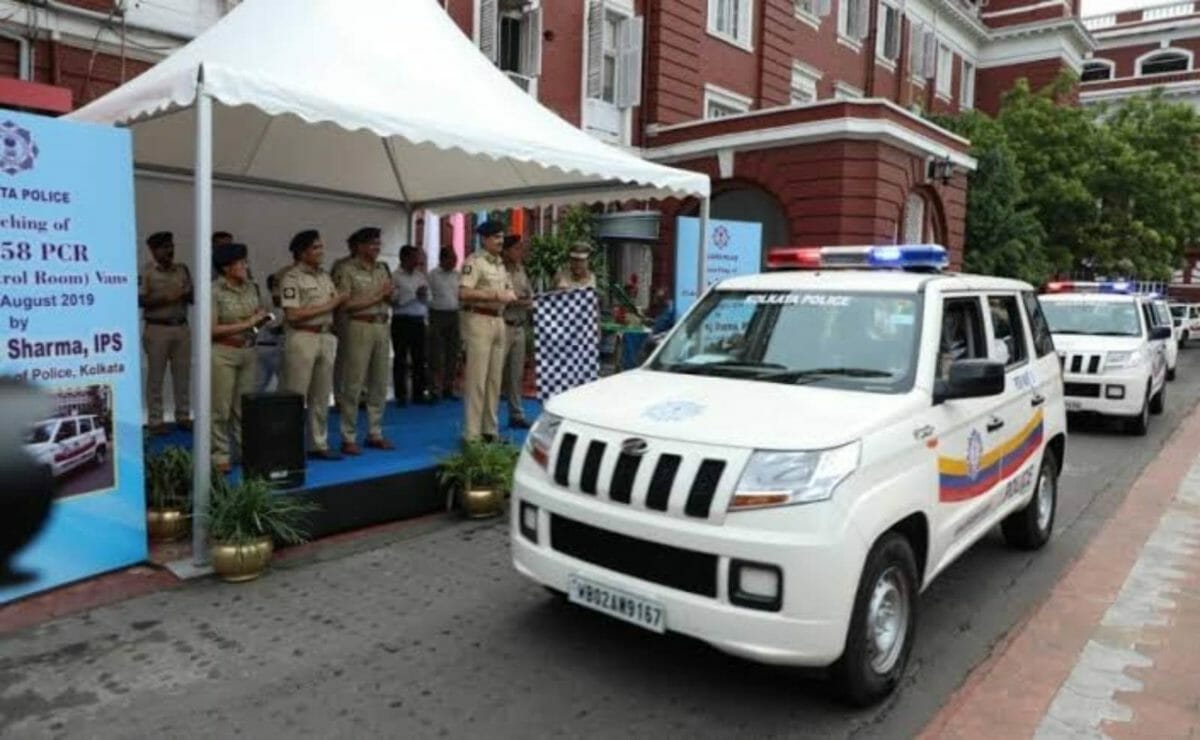 Mahindra TUV300 is the latest compact vehicle to join Maharashtra police. This is a comfortable and spacious sub 4 meter SUV that also looks macho. It is known for its tank-inspired looks and toughness and is a recent addition to the Maharashtra Police who use it for patrolling duties. 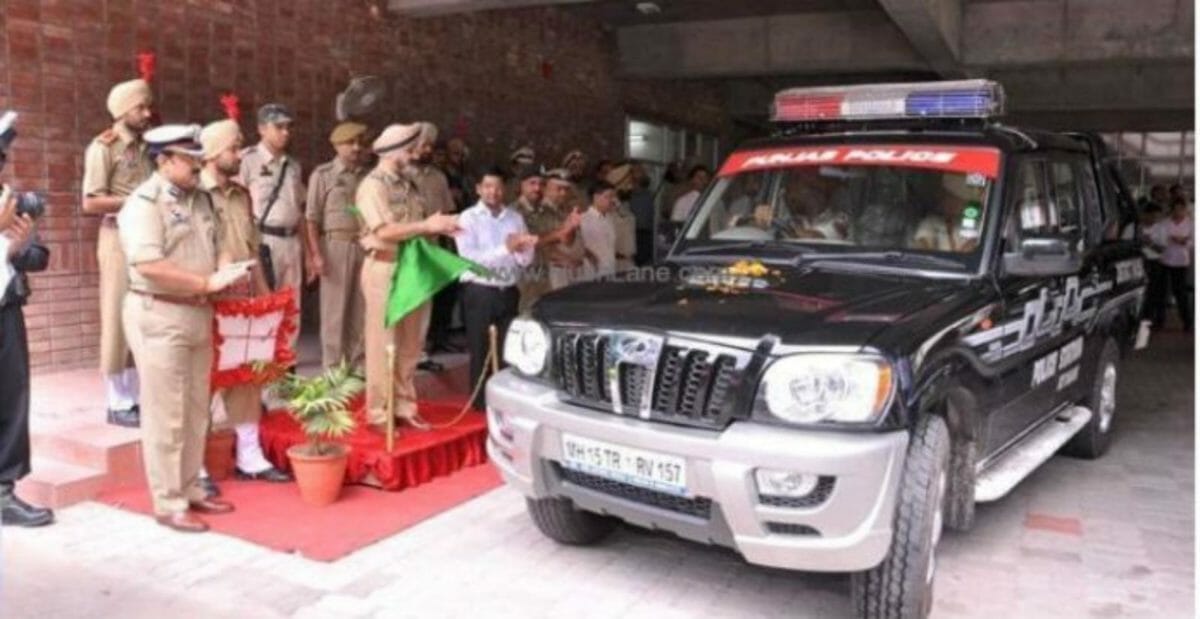 The Mahindra Scorpio has N number of reasons why it has found a place in so many police force armouries. It features a rugged body with a reliable diesel engine and armoured versions of the SUV are the vehicles of choice to protect many of the nation’s lawmakers. While the Andhra Police makes use of the previous-gen Scorpio, the Telangana police force has the current version of the SUV in its ranks. The Punjab Police, on the other hand, make use of the pickup truck version – the Scorpio Getaway. 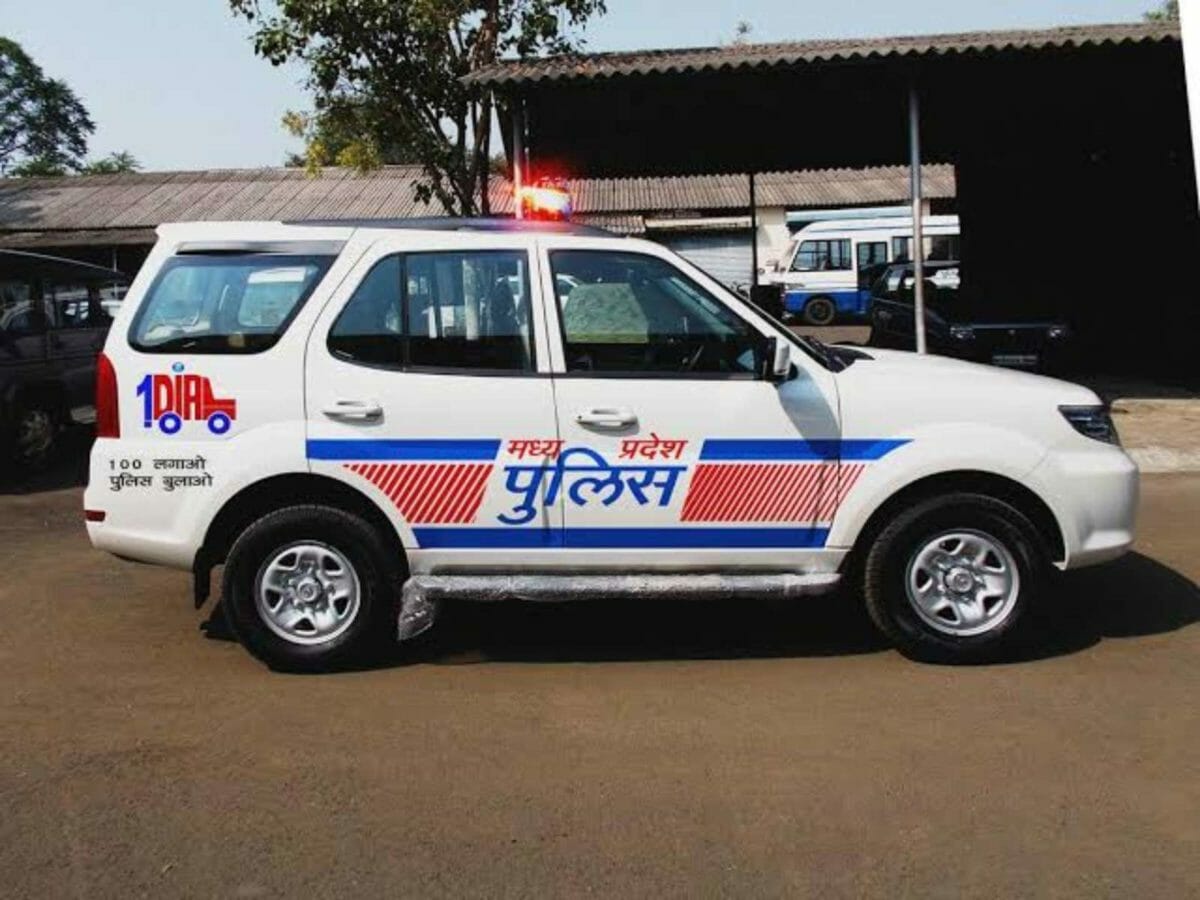 One of the finest Indian SUVs, Safari still has a huge following. It was recently discontinued after 22 years in the market since it did not make the cut to the BS6 emission norms. The Safari Storme was recently inducted into the Indian army and is the vehicle of choice for the Madhya Pradesh and Jharkhand Police as well. It boasts a very comfortable ride, lots of space and can handle long-distance cruising well. With a powerful engine under the bonnet, the Safari Storme isn’t slow and will be an intimidating sight in your rearview mirror with the sirens on. 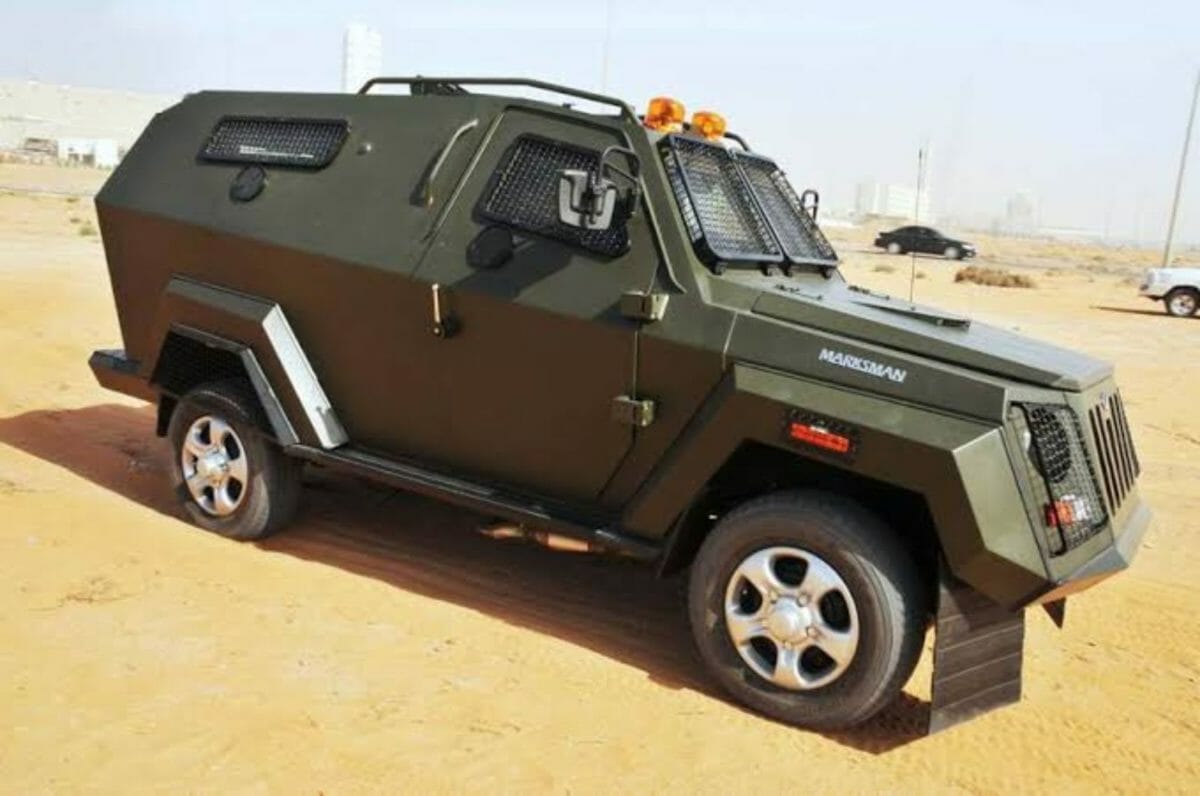 The Mahindra Marksman is used by the police of several states as a riot-control vehicle. To let you know, it is India’s first indigenous light bulletproof vehicle that can withstand heavy firing and can protect against hand grenades too. This bullet-proof vehicle can carry a total of six occupants, has 360-degree visibility, and boasts multiple firing points and even a machine gun mount.  It is powered by a 2.5-litre CRDE engine that generates around 105 Bhp of power and 228 Nm of torque. The Marksman can go up to 120 km/h and is also used by the defence and paramilitary forces of Chile.

Also READ: The Indian Police Force And Their Motorcycles 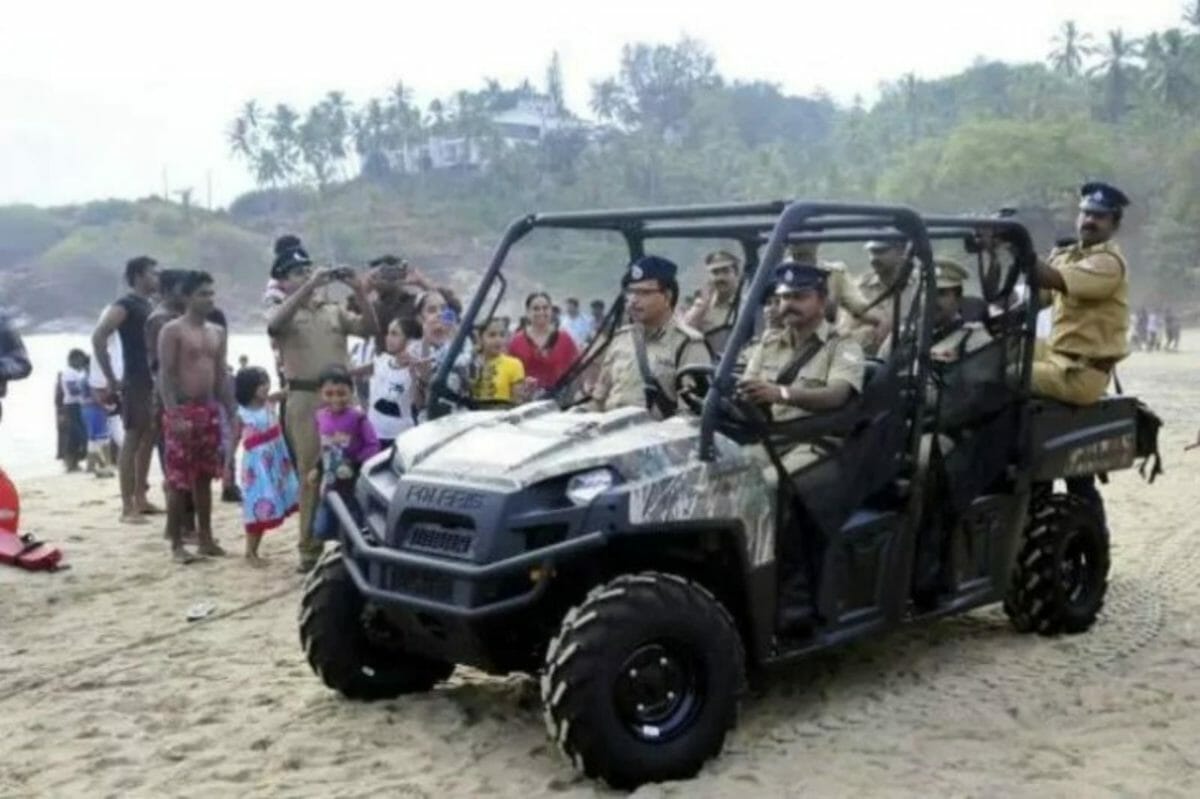 The Polaris RZR as a police interceptor takes it all to a different level altogether. The Polaris RZR S 800 is an off-road machine that can gobble bad/no roads at a quick pace. However, they are currently being used as beach patrolling vehicles because they were later found to be unstable and loud to fight the Naxalites.