Home Lists The Indian Police Force And Their Motorcycles

Motorcycles are used as patrolling vehicles all around the world and India is no exception. In certain scenarios, motorcycles prove to be better than cars because they are compact, easily manageable in tight spaces and can reach remote places where a car can just imagine to be at. A few years ago, Indian Police’s patrolling fleet only consisted the likes of commuter motorcycles and in other cases, Royal Enfields. But times have changed and evolution is inevitable. The same has been applied in this scenario too.

While we still lack a lot behind as compared to other countries when it comes to high-end motorcycles being utilized as patrolling units but our Police Force is catching up gradually. Now they have started including more modern motorcycles in their fleet to take down the goons who get astride ‘fast’ motorcycles. And in some cases, just for escorting the VIPs.

Gujarat Police bought the first set of Indian-made Harley-Davidson Street 750 back in 2017. It was soon followed by the Kolkata Police as well. These bikes have been reserved henceforth as an escort to convoys in both Kolkata as well as by the Gujarat Police. 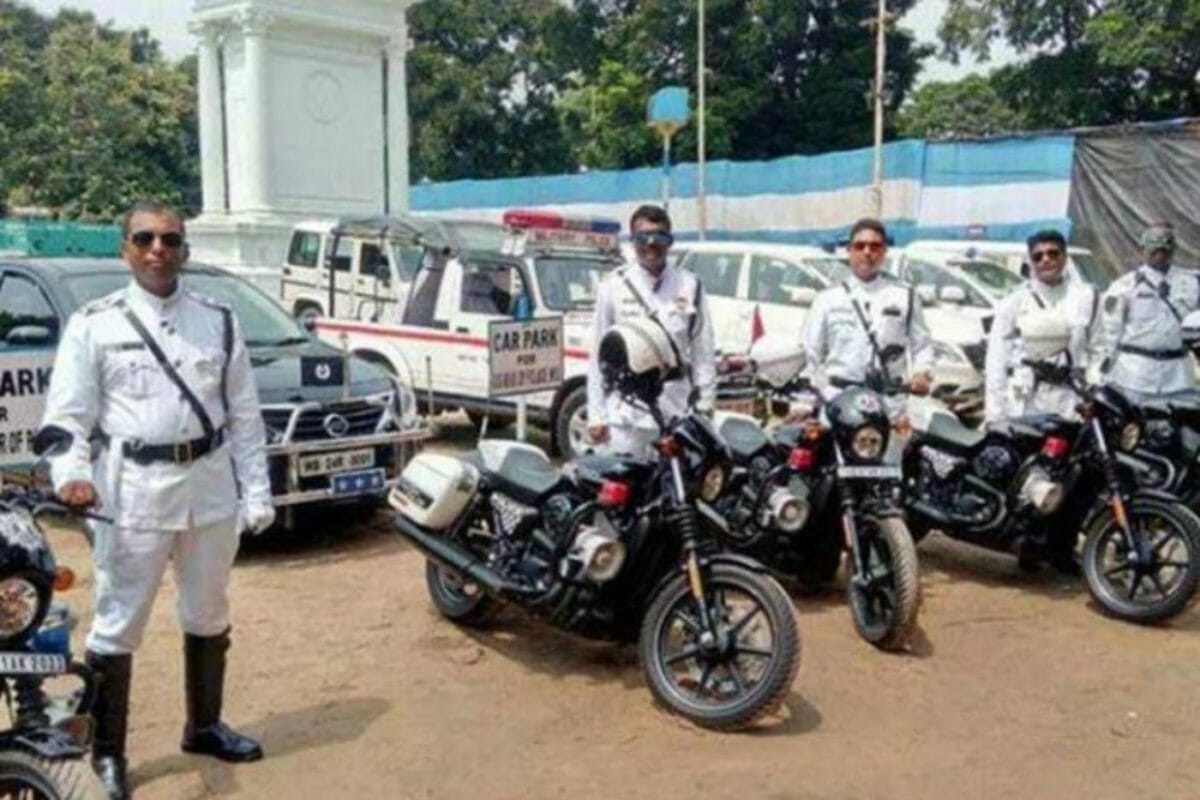 We might not see them in action while catching the bad guys but it is still a thing to be proud about. Witnessing flashing lights in the rearview mirror accompanied by the signature Harley V-twin thump and that too on the Indian roads? Quite possible. It is by far the most powerful motorcycle that has ever been included in the Indian Police Force’s fleet.

The second entrant in this list might not exist anymore but it was an absolute favourite amongst Indian motorcyclists. Relaxed riding ergonomics coupled with a decent amount of power made it an excellent tourer. Uttar Pradesh Police recruited the CBR 250R a few years ago. It takes a lot of cues from the CBR250 Police edition that was showcased at the 2013 Security Expo by Honda. The bike displayed at the Expo got LED lamps, beacon lights, public announcement system and a specially designed helmet with a hands-free microphone. The UP Police edition gets all of this matched with special livery and utility box. 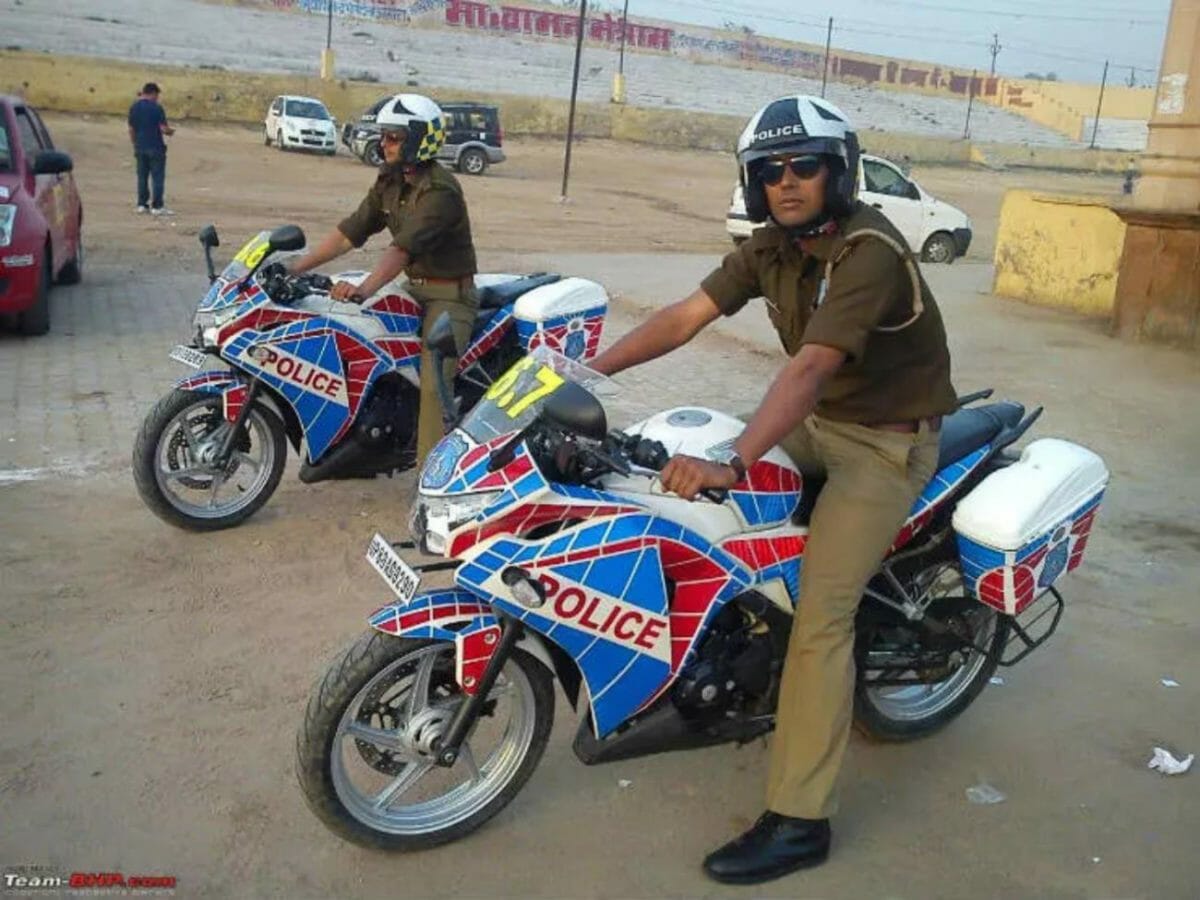 It can be used for patrolling on the highways for longer durations too because like we said, it is an excellent tourer. When it comes to overall performance, it is still faster than most of the two-wheelers present on our roads. Outrunning a Honda CBR 250R being ridden by Uttar Pradesh Police? Who are we kidding!

When TVS Apache was first launched, the market was ruled by the Bajaj Pulsar but it still managed to carve a niche for itself. It also serves as one of the sportier motorcycles serving the fleet of our Police Force. It is much lighter and agile as compared to the bulky Royal Enfields that our cops have been riding for ages. 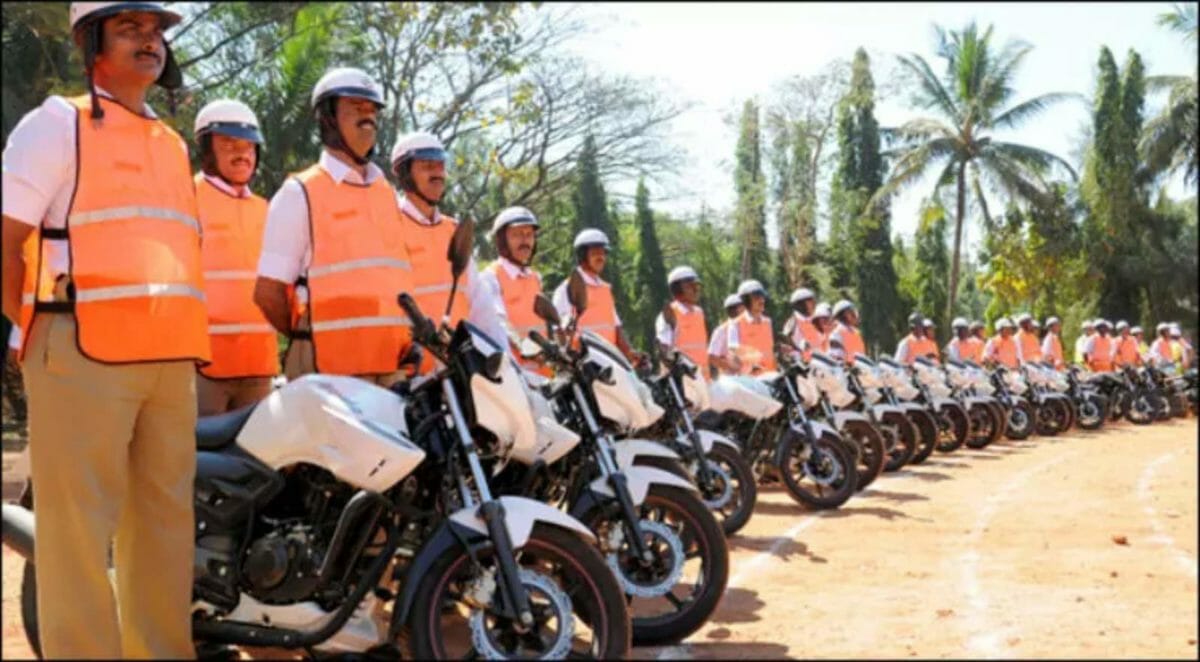 Most of the forces have settled for Apache RTR 160, Mangalore Police have instead opted for the Apache RTR 180. In some recent sightings, we have also seen the new Apache RTR 200 4V clad in their official livery and patrolling the streets. Delhi Police have a special all-women’s squad that uses RTR 180s, as their patrolling vehicles.

Bajaj Pulsar has been synonymous with affordable sports bikes in India. The Hero CBZ might have started it but the Pulsar turned in into a biking revolution. When the whole country is fond of riding the Pulsars, how can the Police Forces feel left behind? 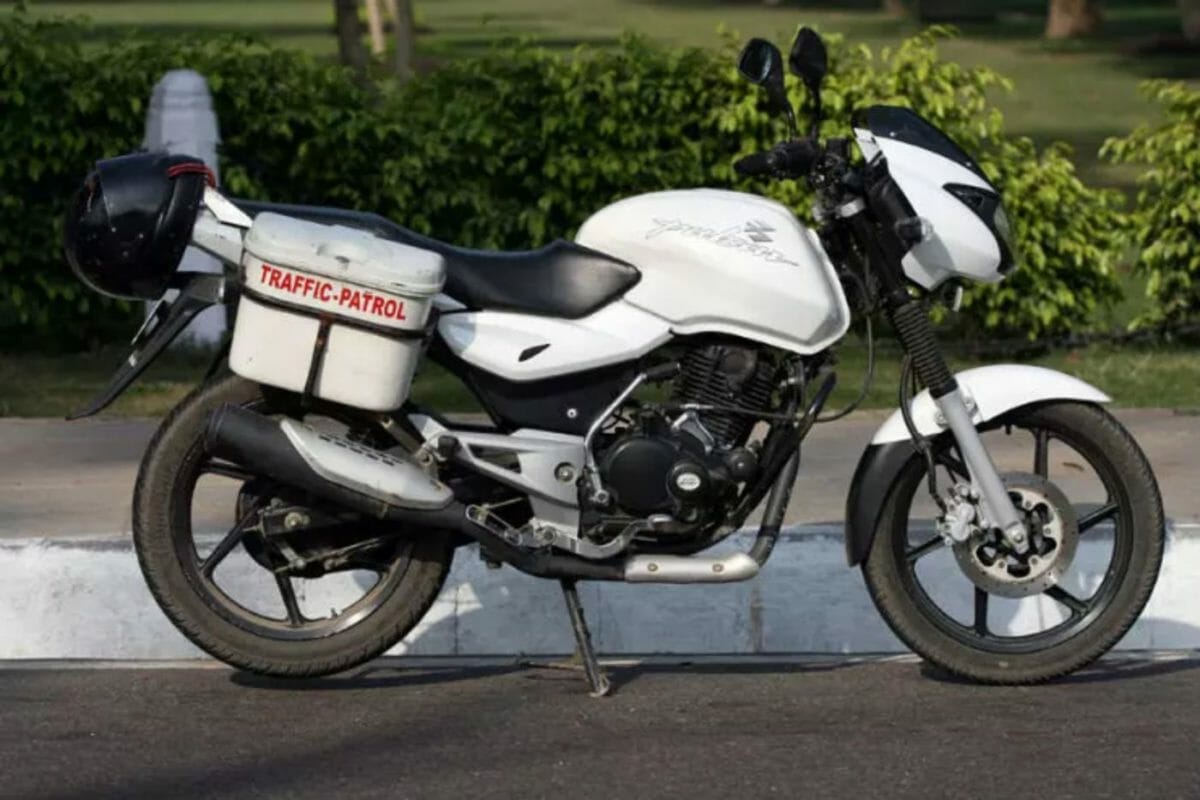 Reports even suggest that the Police Pulsars even get a little more juice than a stock one that you could buy from a showroom, thanks to the absence of a rev limiter. In most cases, Pulsar 180 is primarily used by the Police Forces but we have also witnessed a few Bikini faired Pulsar 220s with Police livery. In Delhi, Bajaj Pulsars are used by both traffic police and civilian police.

The first image that might pop up in your head whenever someone says Indian Police Motorcycle would be of a Royal Enfield because these motorcycles have been a part of our patrolling unit since time immemorial. In fact, it is considered to be one of the first motorcycles to get included in the fleet. After proving its mettle in the Indian army, they were soon included in the Police forces as well. Even today, the police forces in Delhi, Mumbai, Kolkata and several big cities have Royal Enfield motorcycles in their fleet. But now, most of these motorcycles are being replaced with modern, lighter, more powerful and more reliable motorcycles. 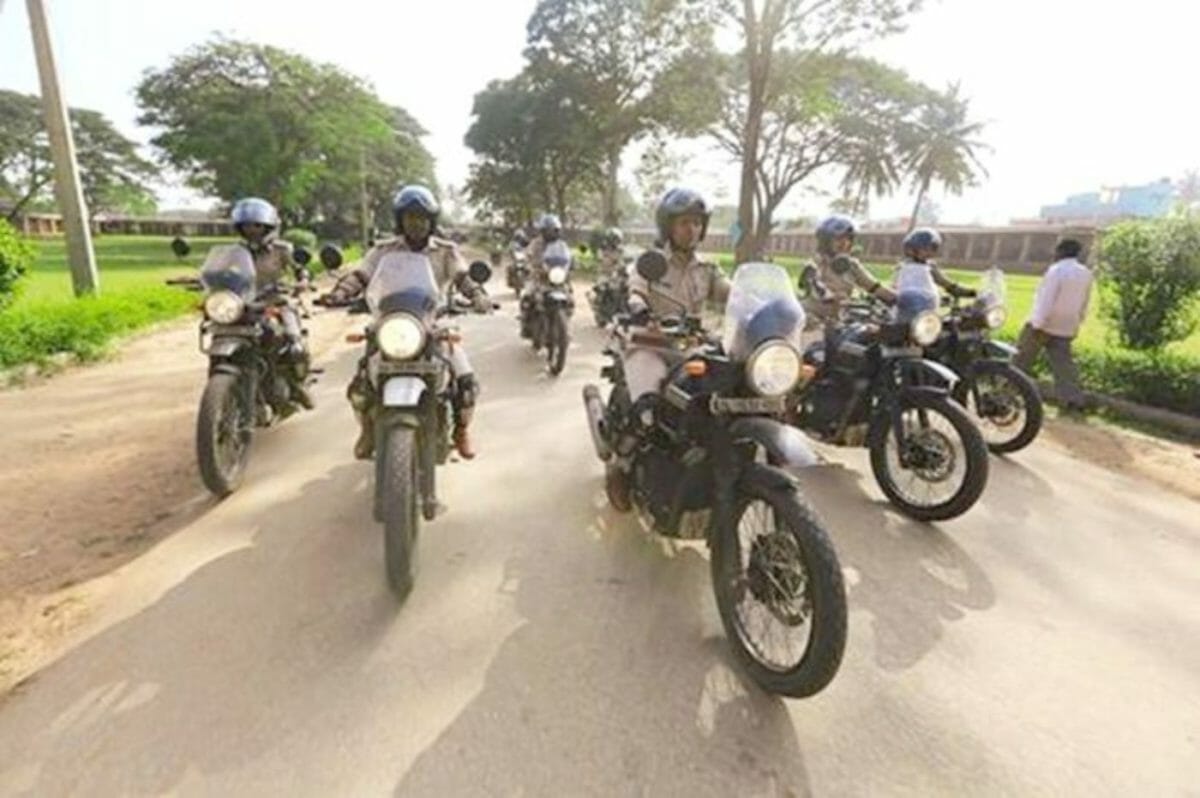 Bengaluru Police recently partnered with Royal Enfield and introduced an all-women motorcycle brigade called ‘We for Women’ that uses Royal Enfield Himalayan adventure motorcycles. The 15 women brigade with all-women police sub-inspectors have all been trained to improve their riding skills and will be a dedicated group for the protection of women and children.

Not only motorcycles but over the past few years, gearless scooters have also managed to find a place among the two-wheelers ridden by the Police Forces. For instance, the women cops of the Jaipur police force have started using the Hero Duet scooter. 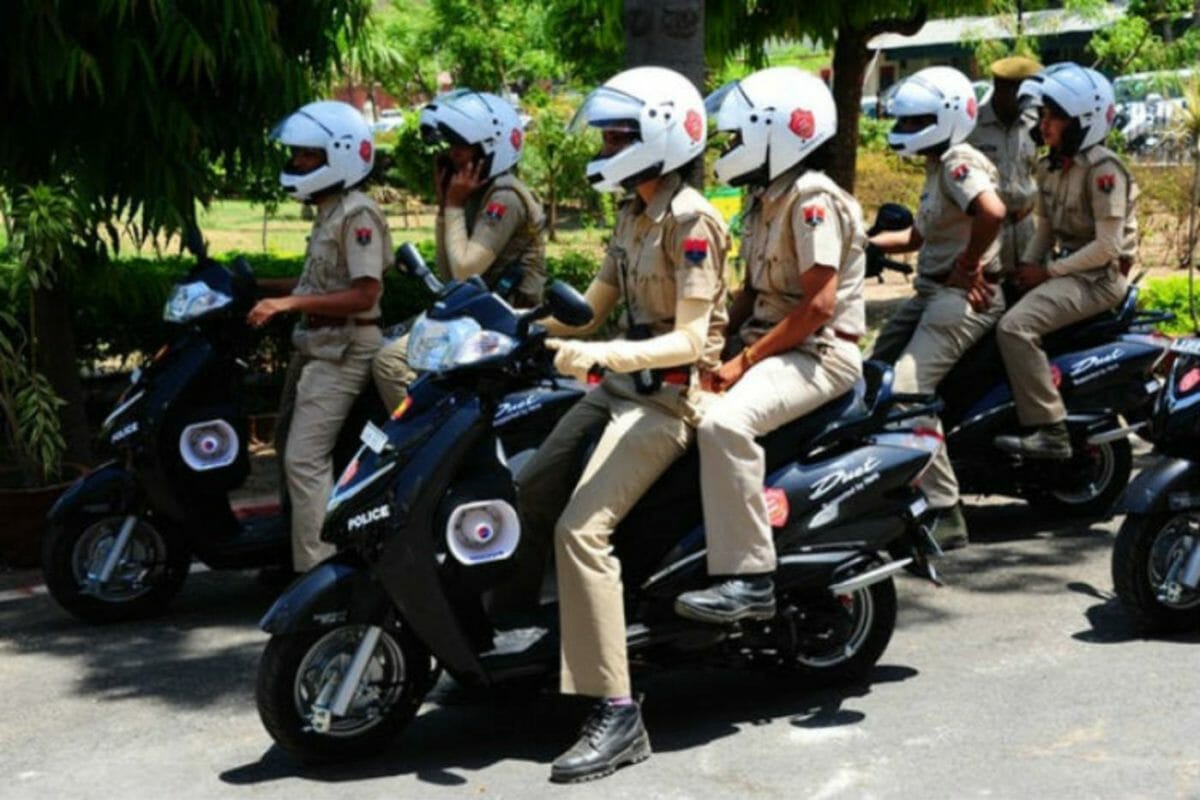 Mumbai Police recently expanded its fleet of Segways to patrol sea faces and promenades in the city, as part of its efforts to ensure safety and security at tourist spots. State Home Minister Anil Deshmukh inaugurated the first 15 of the 50 Segways, self-balancing electric scooters equipped to carry one person, at Marine Drive.

Also read: The Indian Police Force And Their Rides 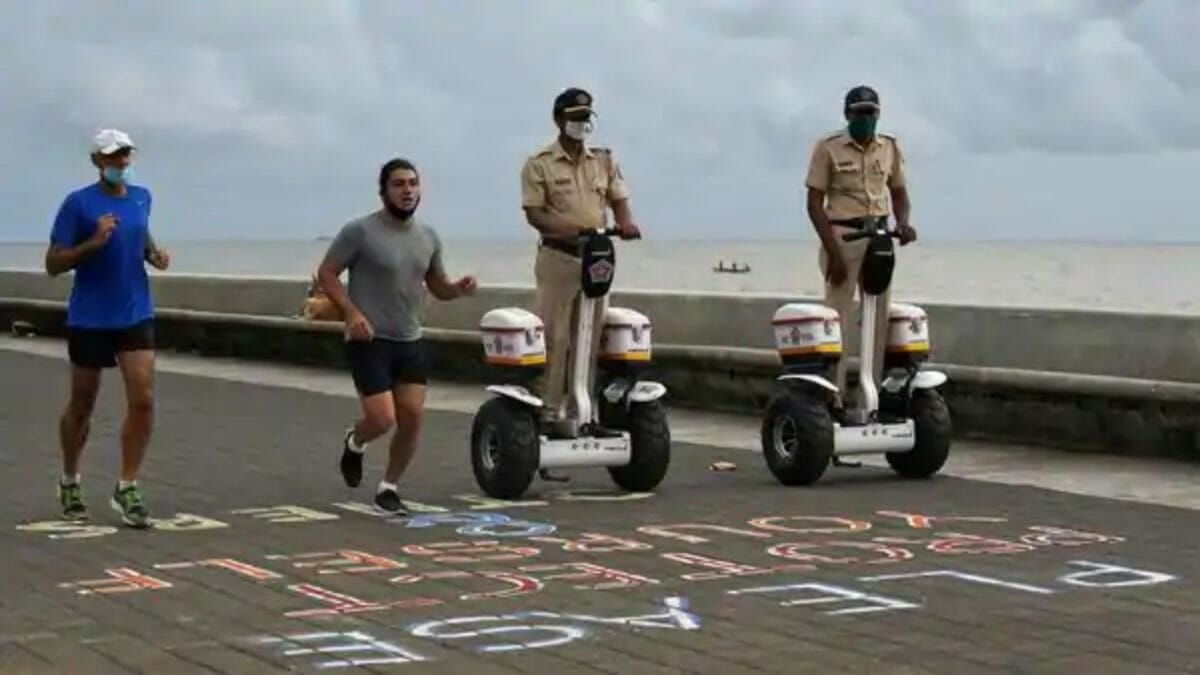 Police personnel manning the Segways will be provided with face masks and equipped with public address systems. Segways were first added to the police’s fleet of vehicles on an experimental basis in 2017, with two Segways being pressed into service. Subsequently, the number was increased to nine, with five Segways deployed at Marine Drive and four at Worli.