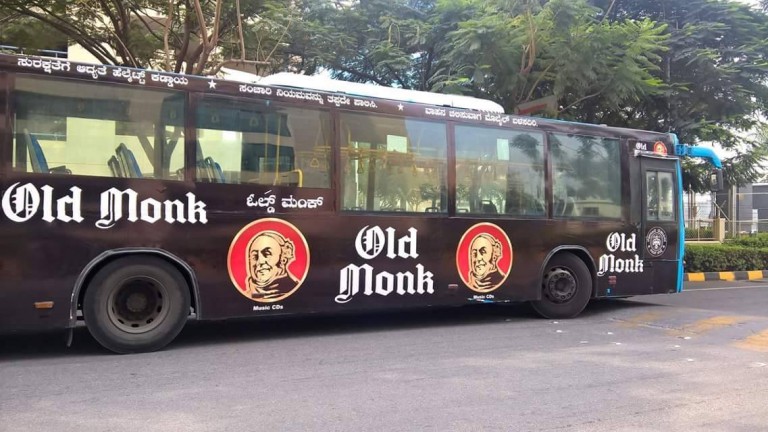 You can apparently make your life large, or get your hausla buland by buying some music CDs created by liquor makers. You can also put a big advertisemet of a potent dark rum on a mammoth of a vehicle, as long it sells music CDs. So what if you still identify the advertisement with the cheapest drink which would taste decently well and wouldn’t give you a hangover the next morning – technically, it’s still supposed to be trying to represent a music album the company doesn’t want to sell.

Bengaluru Metropolitan Transport Corporation (BMTC) buses have been wrapped in the Old Monk livery, and while there isn’t technically anything wrong with it – if you really think a bit deeper, there probably is. A public transport bus, run by the government, splattered in a brand which is known to give a solid high, even when disguised in the garb of music CDs, isn’t a very appreciable idea.

Sure, the liquor companies are within their rights to adopt surogate advertising, but purely on the grounds of ethics, the government controlled company could have done well to avoid this sort of an alliance. Don’t blend drinking and driving, they say – and here we have a government run vehicle, one of the biggest you’d see on our roads, indirectly reminding other road users of what should be the last thing on their mind while being behind the wheel of a car.

For those of you who don’t know, advertising liquor and tobacco products is banned and hence such companies often take the route of surrogate advertising as seen in the images here.

While we think it’s inappropriate for a government run bus to carry this sort of a message, we might well be wrong in our opinion. If you have another point of view, do share it with us. Tell us your views through the comments section below, or through one of the social networks.