Home Features Must Read: How a man sold his Isle of Man trophy to build a Ferrari V8 powered motorcycle

Andreas Georgeades used to be a motorcycle racer who built and raced his own machines in the 60s. Realizing how good he was at it, he spent a good part of a decade trying to create an ultimate racer. While at it, he went on to successfully build and finish first in a grand prix aboard a Honda 600 powered by a 4-cylinder engine borrowed from a Honda car. Such was the extent of his passion for machines and racing, he bought a Matchless 500 GP50 racer from the money he earned after working at restaurants. The man even finished on the podium in his first year at the Isle of Man TT. 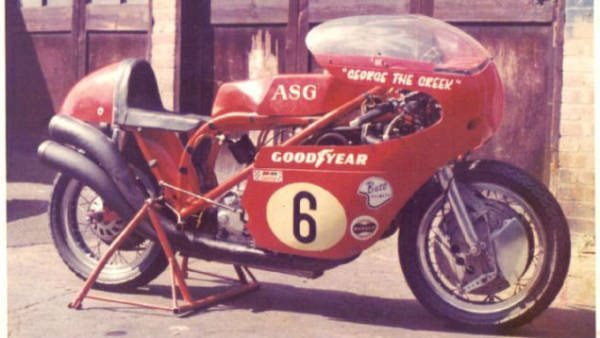 With a successful racing career behind him, Andreas decided to hang his leathers and exploit the idea of cramming a powerful motorcar engine into custom built motorcycles. Between 1978 and 1998, Andreas built three Ferrari powered custom built motorcycles. Two of them were powered by a Ferrari V6 and were called the ‘Dino’, while the third, powered by a Ferrari 308 sourced V8 was called “Andreas”. 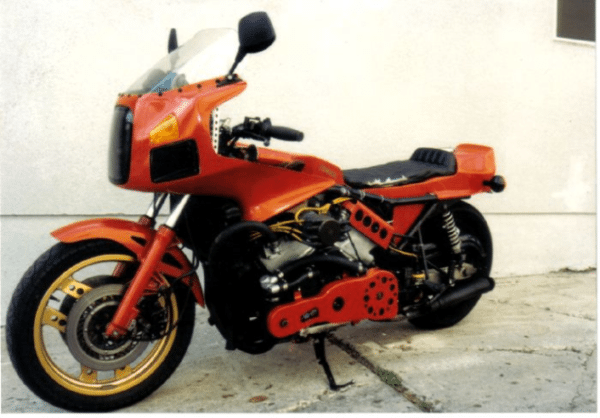 His first attempt at riding a motorcycle powered by a Ferrari V6 resulted in a Honda CBX stuffed with the 200 hp motor. The same motor was also famous for powering machines like the Lancia Stratos, and the Ferrari Dino, which was later upgraded to be powered by a V8. During the build, Andreas faced many challenges, for example, the Ferrari Dino originally had chain driven cams which had to be converted to be driven by a belt. And the motor was modified to accept the transmission and clutch from a donor Suzuki motorcycle. 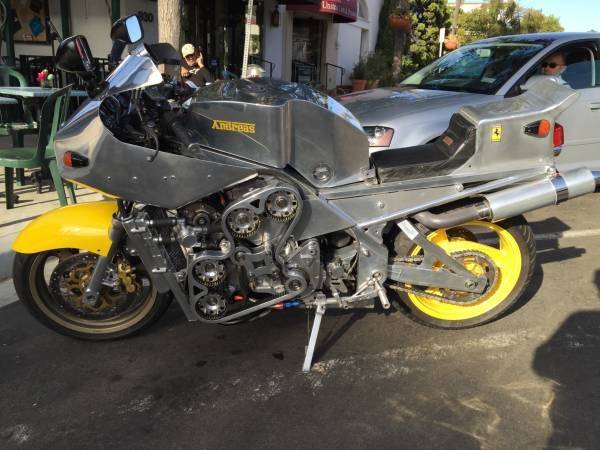 Not content with six cylinders, he wanted to add two more between his legs. But a 250 bhp, four-cam, eight cylinder Italian motor would cost him nearly $55,000 in present day money. Desperate times call for desperate actions, so the man traded his prize, a bronze trophy from his podium finish at the Isle of Man TT to source a 1978 Ferrari 308’s V8 engine. The motor was then bolted on to a hand-built aluminum frame that used suspension components from a Kawasaki 900 Ninja. The rear wheel came from a Yamaha V-Max and the drive shaft was ditched in favor of a conventional chain drive. Modifications to the bike also included a new cam-belt drive that also powered the water pump, and a three-gear transfer case between the engine and Honda CBX transmission. A bank of Yamaha V-Max carburetors fueled the front cylinders, while Suzuki GS1100 carbs fed the rear. Radiators sourced from a Suzuki GT750 were mounted at the rear of the bike to keep the wheelbase down to a short 59 inches , which also explains the existence of those massive ducts at the rear. 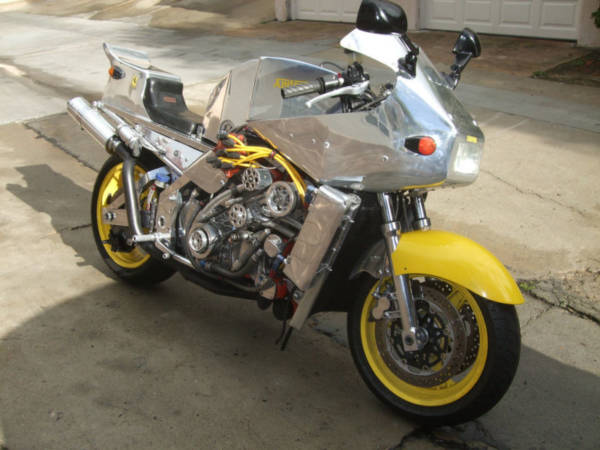 Andreas went on to create a third and equally radical bike based around the same Ferrari Dino V6 motor that powered his first. But this one had to stand out too. So he added a self made supercharger to take performance to the next level. The blower was designed by Andreas and machined using some massive chunks of billet aluminum. Some time ago, Andreas had put one of his rare and radical beasts for sale at an asking price of $250,000. This time too though, he chose an unconventional space to attract buyers. It’s called Craigslist.

With inputs from Jalopnik