Home Features Video: Volvo throws XC90 into a ditch to show how safe it is! 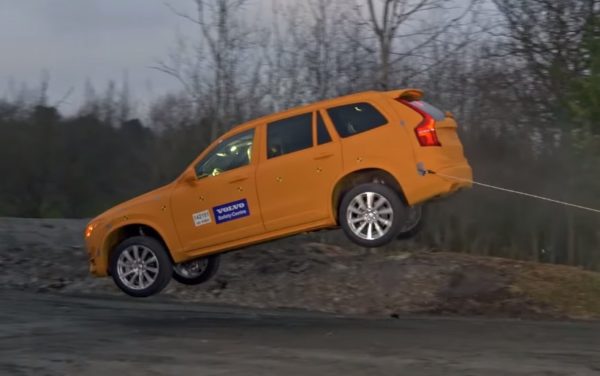 Volvo has been known to build the safest cars around. To demonstrate more of its prowess in vehicle safety, they threw their new flagship, the new XC90 SUV into a ditch in front of cameras. Presumably the dummies inside came out unscathed, following Volvo’s new Run Off Road Protection doing its thing, which detects when the car’s tire/tires leave the tarmac at high speed and prepares the cabin and occupants for an impact. After detection, the system retracts the seat belts while a spine protection element between the seat and the seat frame helps cushion the blow for passengers. Post that, the airbags are activated in case of a forceful frontal impact and release pin is sprung that retracts the brake pedal. Watch the ‘ditch test’ here:

All these sequential event happen within a matter of seconds, and Volvo had shown an animated video of the safety feature at work in July.This month, with this ‘ditch test’,  it showed off the system in real life at a facility in Sweden. The yellow test vehicle left the facility at 48 miles per hour before driving over the side of a constructed road, hitting an embankment and going airborne. Watch how the Run Off Road Protection feature works in the video below: