Going by our two wheeler sales analysis, the month of July 2014 was a relatively fertile month for all manufacturers. All of them posted robust sales figures, as well as healthy growth rates. 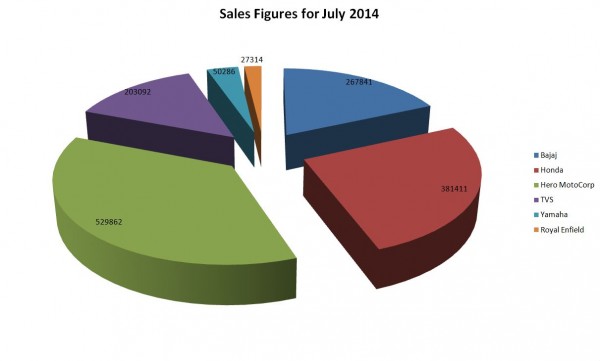 As one can notice from the sales pie, Hero MotoCorp still has a vice-like grip over the lion’s share of the market. It appears that the deadly duo of Splendor-Passion combined with the vast reach of Hero MotoCorp makes it a potent force to be reckoned with in the Indian hinterland. High fuel efficiency, tough suspension components and a large load carrying capacity make the aforementioned bikes the go-to vehicles in India’s mofussils as well as semi-urban areas.

They do clock good figures in urban areas too, but here they face tough competition from Honda’s Dream series of bikes. The informed customer rarely pays attention to the positive word-of-mouth that Hero MotoCorp has managed over the years. So, here we see Honda, soldiering its way in the Indian market. Over the past year, it has been posting steady growth to reach the position of the second largest two-wheeler manufacturer.

As mentioned earlier, all manufacturers have posted healthy growth figures when we compare the month of July for the previous year. The steep climb of Royal Enfield can be attributed to the fact that its new plant in Oragadam has helped reduce waiting periods and boosted sales. Yamaha and TVS have been trudging along on the backs of their scooter models, but not so much as motorcycle models. Hero MotoCorp and Bajaj Auto too have posted impressive increases. But the applause must go to Honda, which has shown the highest climb. As it hurries towards its goal of attaining the numero uno status in India, Hero must look back and assess the threats!

A special mention must be made for scooters. Though perceived as un-manly and underpowered, these puny two-wheelers have powered the growth stories of the manufacturers. Honda has been riding high on its Activa range, and TVS has been witnessing similar success with its Jupiter and Wego. Yamaha too has been poignant about its Ray’s success. It is to be noted that Bajaj Auto is the only manufacturer that doesn’t have a scooter in its portfolio.

The question thus arises : Is it high time to revive the Chetak? 😀