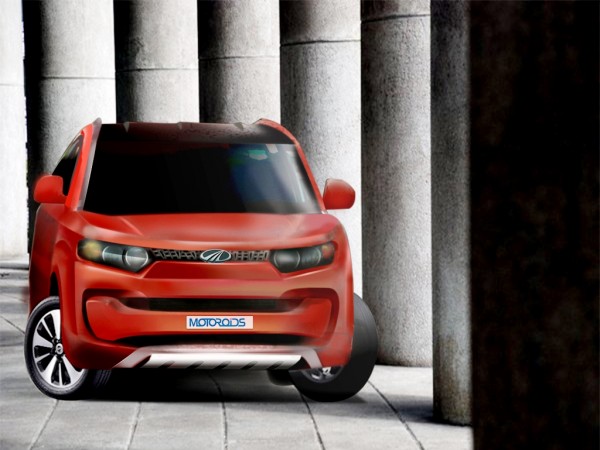 Driven by miserable sales of the Quanto- a hasty, half-baked effort to grab a chunk of the sub-4 meter compact SUV pie, Mahindra will be back again with all guns blazing in 2015 with fresh, well-rounded SUVs.  The crux of attention will be on the new sub 4 meter compact SUV, codenamed the S101. The car will go head to head with Ford’s hot-selling Ecosport.

Although there have been numerous sightings of the S101 prototype, camouflaging has been heavy and stylistic details are scratchy at best. However, we tried to throw some light with the above render. Unlike the shouty XUV500, the S101 will bear sustained aggression. Influences from its closest competitor Ecosport are abound, especially on the front where the usual, imposing Mahindra slatted grille will be replaced by a much narrower mesh job flanked by some trapezoidal headlamps with a twin barrel setup. The large front bumper will seemingly have twin gashes running across it, with a strip in between for the number plate. Other elements on the bumper, like fog lamps or DRLs are unclear at the moment. The S101 will also feature a clamshell bonnet and a ribbed roof, like the ones on its bigger brother, the XUV500.

The sides are said to benefit from the Ssanyong Korando, a compact SUV of similar proportions from the brand that M&M recently bought a stake in. The quarter window, typical of SUVs and wagons will be given a miss, and the S101 will get a more hatchback like greenhouse, driving home its compact intentions.  The subtly flared wheel arches will keep over dramatization in check. As with other sub 4 meter cars, the S101 will end abruptly, with minimal rear overhang. Details about the rear are still terribly sketchy, although it’ll feature a tailgate mounted spare wheel and slim tail lamps.

On the inside, the upcoming Mahindra S101 will feature a center console mounted gear lever, allowing Mahindra to use a 2+1 seating configuration at the front, somewhat similar to the setup seen on the Datsun Go hatchback. Two new, highly modern, small capacity petrol engines from Mahindra will fill up the engine bay. These engines are currently being developed with assistance from Ssangyong. While one of these engines would be a three pot unit, the other would be a four pot petrol unit. The upcoming engines won’t even be remotely related to any of the older Mahindra petrol engines. Mahindra could also offer the 1.5 liter, 3-cylinder mCR100 unit with S101 which currently powers the Mahindra Quanto.

The S101-rumored to be christened as the XUV300, is expected to be launched in the first half of 2015, with prices hovering around the 6 lakh mark. By then, competition is expected to hot up with fresh entries from GM and Maruti Suzuki.