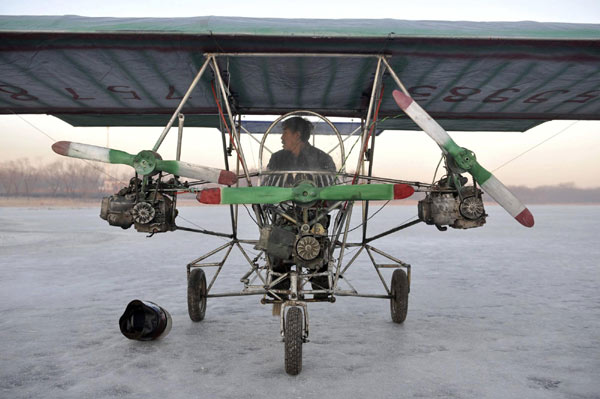 Ding Shilu, an automobile mechanic from China has created an aircraft which may probably be the cheapest full-size flying machine ever. The aircraft, made from three motorcycle engines, plastic sheet and other recyclable materials has cost him only $395 (Rs 18,000). The aircraft weighs only 130 kg, lighter than even some 150cc motorcycles sold in India. Ding Shilu took a test-flight of the aircraft at a frozen reservoir in Shenyang, Liaoning province on February 25, 2011.

We tried to get more info on Mr. Shilu and his aircraft, but these pictures and the little information is all we could get. We would love to see the flight of his incredible aircraft, but unfortunately it’s not available anywhere on the internet. Do mail us at [email protected] if you stumble upon any further info on this piece.

In the meantime, you can enjoy this video of this another home-made aircraft, again, somewhere in China, and take your hats off for the bravery of the pilot who put his life in danger maneuvering such a rickety piece of machinery.